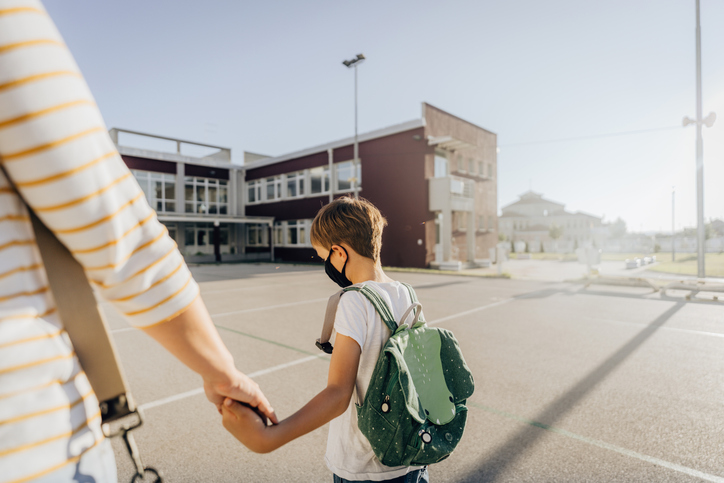 The first time I was notified our son’s reception class had to self-isolate, it was a Monday morning and I was standing at the school gates ready to drop him off for the day.

The whole year group of 60 children was told to go home – and stay there – for 10 days because his teacher had caught Covid-19.

This announcement came just days after the week-long half term in October last year and obviously meant that life for our family came to an immediate stand-still.

We were unable to seek childcare for our son because of the risk of him having the virus and work commitments had to be put on hold so one of us was always available to look after him. Four year olds aren’t always great at occupying themselves.

An email telling us he has to stay at home can come at any time and it’s the main topic of conversation between the exhausted and frustrated parents at my son’s school each morning at the moment.

Every day, I think: ‘please can we just get through the next three weeks before the summer holidays without his bubble bursting?’

But of course, for the parents and carers of over 375,000 children who are currently not in the classroom this week, this is already their reality. And I know exactly how they feel.

Our son’s class bubble has burst twice since October and as soon as it happens, everything has to stop and the juggle begins. It’s incredibly stressful.

During those times, while my husband and I and our two-year-old twins have been lawfully allowed to leave the house (with one of us staying behind with our son), we were obviously aware that he could have had Covid-19, so we stayed at home as much as possible.

Our south London home is small and being cooped up all together was a horrible repeat of the first lockdown in March last year.

During my son’s first isolation in October, friends and family were wonderful – new puzzles and sticker books arrived in the post and biscuits and cakes were dropped off. Back then, these situations were still quite new.

Despite our son self-isolating twice, none of our family of five tested positive either time

Now, the majority of our friends with kids have seen school or nursery bubbles burst, many more than once, including us.

We were very lucky in that our son was able to attend school for two days a week during the second lockdown. As cases reached their peak across the country, his school was affected again.

The email arrived at 8.45pm on a Sunday night. This time two staff members who helped at lunchtimes tested positive, and two days after going back, every child attending school was sent home again.

Our poor son was so confused and disappointed. But this time felt a bit more bearable for us as the whole country was in lockdown, everyone was working from home and the majority of parents were attempting to home-school again.

Data from the Department for Education showed that in the week to 24 June, around 279,000 children at state-funded schools were self-isolating due to a possible contact with a Covid-19 case, a further 24,000 pupils had a suspected case of coronavirus and 15,000 had a confirmed case. In addition 57,000 were isolating after potentially coming into contact with a person who tested positive for the virus from outside their school.

Some of these children may be isolating for the third or fourth time this school year and thousands have missed weeks and weeks of school.

While I feel worried about our summer-born son struggling ahead of starting Year One in September, I’m also relieved that he is still young and hopefully will catch up on anything he’s missed.

I can’t imagine how stressful it must be for teenagers who are sitting mock exams right now or for Year Six children who are preparing for the transition to secondary school.

One of the most frustrating parts of this is that in many cases, the children who are being forced to isolate are not contracting Covid-19. Despite our son self-isolating twice, none of our family of five tested positive either time.

This issue is especially the case for primary school children. Instead they are missing huge chunks of their education, sitting at home playing computer games or watching TV while their parents try to work.

Scientists have backed a change to the rules, with Professor Adam Finn, from the Joint Committee on Vaccination and Immunisation (JCVI), telling LBC radio that children ‘don’t get ill very much when they get this infection so the harm that’s done to them by closing schools or by excluding them from schools far exceeds any harm they get from the virus itself’.

Minister for Schools Nick Gibb has said a decision on replacing self-isolation requirements for school bubbles with testing will be made before 19 July. ‘We are conducting trials of daily contact testing as a possible alternative to self-isolation,’ he told Sky News on Tuesday.

But that’s not much use for parents in England who are desperate to keep kids where they belong before schools break up for the six week summer holiday.

It’s clear that this situation is unsustainable. The children have already missed so much school, and every day in the classroom is a million times more beneficial than anything us parents can do at home. Home-schooling is really challenging when you’re unqualified, time-poor and have more than one child.

Our son’s school was fantastic at sending us work for the kids to do but we probably only managed around an hour a day, maximum. We did a lot of creative activities and tried to play in the garden but I’ll be honest, a lot of television was watched.

The excitement when he went back to school after each isolation was palpable – and I’m not just talking about his!

The 10 day self isolation rule has been in place since September last year when all school year groups went back. At that time it was considered the best way to prevent the spread of the disease and save lives.

This was obviously months before the vaccines started to be rolled out and it is clearly no longer the right approach.

I can’t say I will relish testing our five-year-old every day if that’s the recommendation but if it means he can go to school, be with his friends and learn from his wonderful teachers, then of course it’s the best solution we have right now.