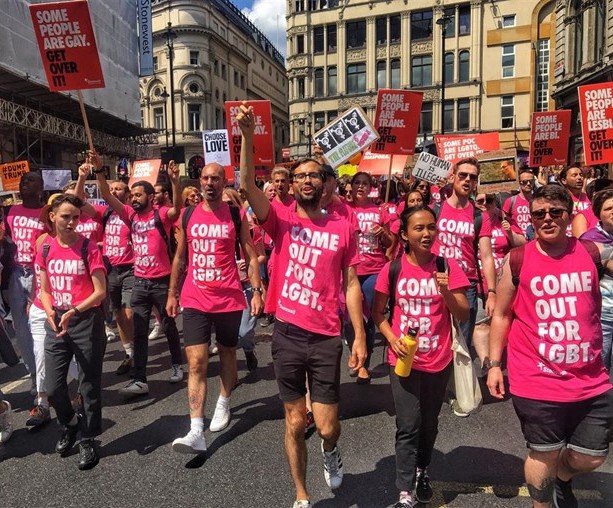 ‘You want to check your phone, don’t you?’

It hadn’t even been half an hour into our walk together before my friend asked. I sheepishly nodded.

‘Jeff, this isn’t normal,’ said my friend. ‘You’re not supposed to be working. You’re on leave!’

I knew she was right, but I couldn’t stop myself from whipping out my phone.

Throughout my time at Stonewall – Europe’s largest LGBT+ charity – I developed a compulsive habit of checking the news and Twitter every 20 minutes. More often than not, I saw trans people under attack.

The tidal wave of transphobia has been so overwhelming and unrelenting that I passed my breaking point and have now had to take a year off work.

It’s been my job to keep across coverage of our community and to coordinate the organisation’s public response to breaking stories by issuing statements, penning opinion pieces and engaging with journalists across the UK.

This kind of work doesn’t stop at 5pm or on the weekend. Not when there’s been a 400% increase in the UK’s coverage of trans issues over the last decade, and when transphobia spreads like wildfire on social media.

The tipping point for Britain’s rising anti-trans rhetoric came in 2017 when government ministers announced their intention to reform the Gender Recognition Act 2004 (GRA) that later led to Theresa May launching a public consultation. The GRA is the piece of legislation that regulates how trans people can get their gender identity legally recognised.

By inviting the public to have their say, the consultation opened the floodgates to an unprecedented torrent of anti-trans opposition in the press, Parliament and online.

An Australian feminist hosted a presentation in Parliament in 2018 and reportedly compared trans women to parasites, and that was when I knew transphobia wasn’t just on the rise – it was becoming respectable.

Views like ‘trans people are not valid’ are accepted as a reasonable matter of opinion, completely neutral and benign.

In fighting for trans rights, Stonewall itself has become a lightning rod for hateful online comments. On a daily basis, we’re accused of ‘sterilising children’, promoting ‘rape culture’ and ‘erasing homosexuality’ for wanting trans people to be able to live free from violence and discrimination.

As a public face of the organisation, I have been the subject of countless online pile-ons. It’s become just part of the job to be harassed and called a ‘pervert’, ‘bully’, and ‘misogynist’.

On good days, I can easily shake it off, but over time and on bad days, it’s just exasperating seeing yourself get ripped apart by people you’ve never met.

As excited and fulfilled as I was by my job – working for a charity I love and defending a cause I care passionately about – it’s been impossible not to internalise the hostile comments. They eat away at you and there were so many times I would just burst into tears thinking about the awful things said about me, Stonewall and trans people.

After developing a constant state of anxiety about what might come next, or what might happen if I’m away from my phone for an hour or two, I have been forced to admit I’m burned out by the vitriol – and I’m a cisgender, white, middle-class gay man.

The abuse I get for supporting trans rights is a fraction of what trans people endure every day.

Online abuse is only the tip of the iceberg when it comes to the real-world hostility they face. One in four have faced homelessness, while almost half don’t feel comfortable using public toilets.

New research paints an even bleaker picture, with a sharp rise in trans people hiding who they are at work in the UK compared to five years ago and a quadrupling of anti-trans hate crimes in the same period.

I’m privileged to be able to take a break. But not everyone is.

As I begin my sabbatical from Stonewall, I want people to wake up to how dire things are for the organisations who support trans rights.

We are facing an unprecedented, highly orchestrated campaign of contempt and misinformation. The price for speaking out is intimidation, threats and abuse, but we can’t let fear stop us from doing what’s right.

In my experience, British society has never been more hostile to trans people than it is now. It’s more important than ever that all of us do more to stand up for trans communities. For cis people, it’s our responsibility to use what power and platforms we have to raise awareness of what’s happening and to amplify trans voices.

We must remember that equality doesn’t exist if the most marginalised in our communities are left behind; while I may have the choice and freedom to do things like get married, others within the community are being denied their right to necessary healthcare.

The burden for social change can’t rest solely on the shoulders of trans people. So what can you do?

Support trans-led and LGBT+ charities. Read books like Trans Britain, Transgender History, Whipping Girl and The Transgender Issue. Write to your MP and ask them what they are doing to support a total ban of conversion therapy.

I will continue to fight for trans rights in a personal capacity because I want to live in a society where trans people don’t have to fight for the slightest recognition of their humanity – where they are able to tell their stories on their terms, and one where their joy is celebrated.

The sooner this happens, the closer we come to a world where every person – regardless of their gender, race, class, sexuality or ability – can live freely and safely.

That’s a world worth fighting for, and we all play a part – not just online or at work.