Home » Europe » I made it through 'The Queue' in 4.5 hours to see the Queen's coffin 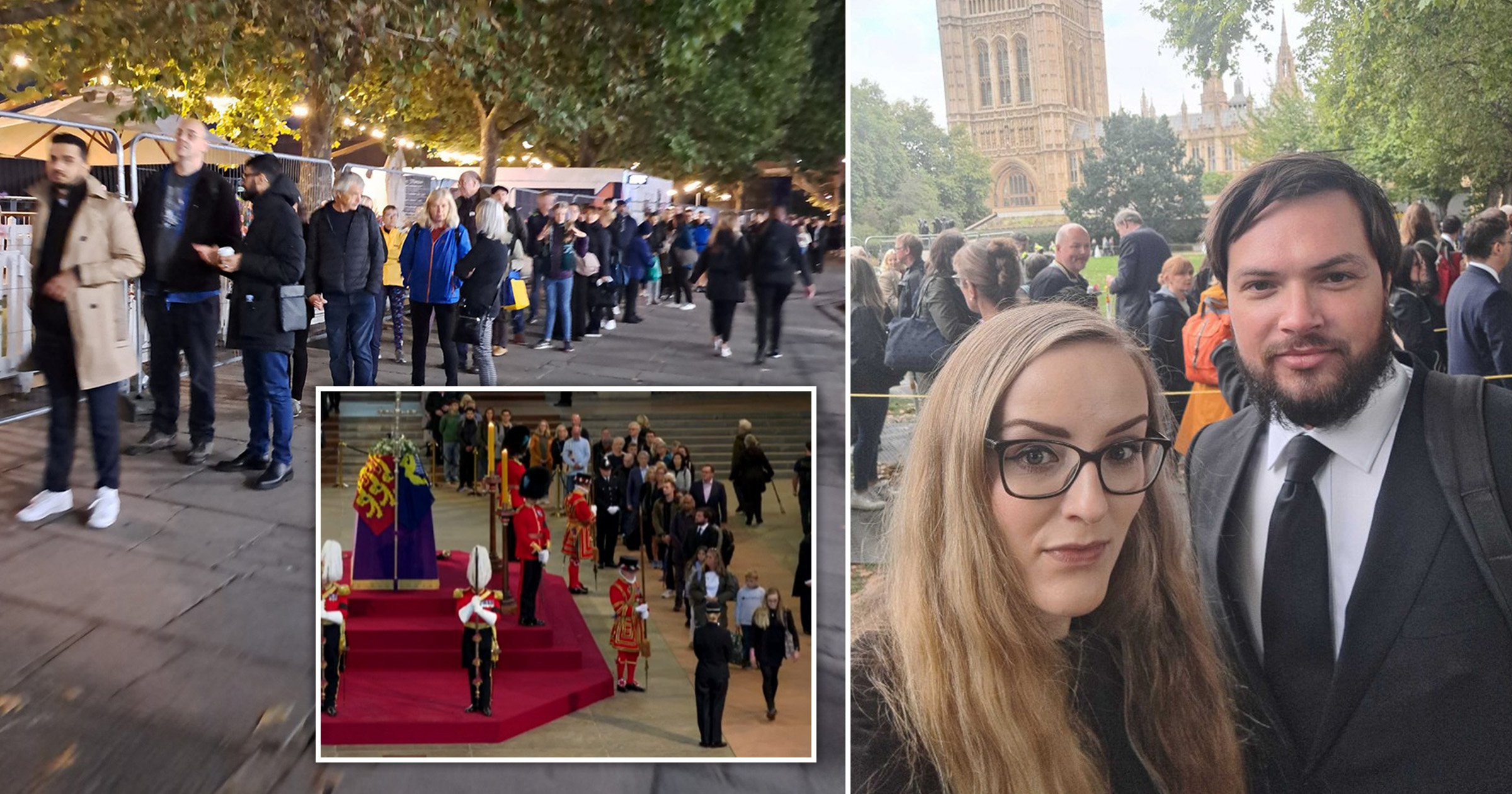 It was 5.40am and I stumbled through Waterloo station, bleary-eyed and clutching a coffee.

This would be a normal sight if I was working the early shift this morning, but today I was instead left to tackle the most British of challenges – the queue to see the Queen lying in state.

As if we haven’t seen enough mind-boggling history over the last few days, from the Vigil of the Princes to the Queen coming home to Buckingham Palace for the final time, Brits have now formed what must be the longest queue of all time to say goodbye to Queen Elizabeth II.

Completely daunted by the task ahead I walked alongside the river in the near-dark to reach the very end of the two-mile long queue – dubbed by many as the new Elizabeth Line – under Blackfriars Bridge.

And although I knew it was going to be incredibly long after checking the live tracker online, seeing it in real life made me realise I was truly in for the long-haul.

Still, reaching the end bang on 6am I exclaimed, ‘We’ve found the front!’ and a friendly worker manning the line joked, ‘Er… I think you’ll find this is very much the back.’

Undeterred, we unwrapped breakfast as dawn broke and I took a look around at who was waiting alongside me next to the Oxo Tower.

What first struck me was the atmosphere. Despite the occasion and time of morning people were bright and lively, with chatter bubbling quietly along the line.

Although there were brief periods of stopping, the queue was constantly moving – albeit slowly – and that made the whole event feel much easier.

Soon enough I found myself deep in conversation with the people around me in the queue, telling one another things about work, family and our personal lives.

Eventually though of course we ended up discussing what brought us to see the lying in state in the first place.

It had to mean something to us to come out today

Parbatee Manoo, who is 48 and works for a bank, told Metro.co.uk: ‘We came to pay our respects to the Queen, she’s been a constant in our life for so long and so many years, we felt obligated to come down.

‘The Queen has always been steady in her duty and responsibility, and how she’s respected people.

‘We’ve always stayed up-to-date with the Royal Family, especially the Queen’s journey and what she’s doing.

‘It had to mean something to us to come out today.’

Her husband Bobby, who works in IT at AIG, added they moved to the UK from Trinidad and Tobago around 17 years ago.

The Caribbean country gained its independence in 1962 and became a republic in 1976.

‘We have a long history with the monarch,’ the 53-year-old said.

‘I remember when I was a young chap the Queen and Prince Philip visited Trinidad – I think it was in the early eighties – and she passed just in front of our house.

‘She did wave and look at me, though of course the streets were lined with people.

‘It was interesting at that time, because in the run up to that visit the entire country was just wild with the theme of the royals.

She’s been with us throughout our lives

‘All the schools, the newspapers – everything was about the Queen’s visit – so it was a very momentous occasion and very special for us in the Caribbean.

‘So we’re here to pay our respects to her long years of service, not just to Britain, but all of the Commonwealth countries.’

The couple feel as if the Queen has ‘been with us throughout our lives’ – now living in the Royal Borough of Greenwich, they previously lived in Royal Park in Trinidad and Bobby studied a masters degree at the Old Royal Naval College.

Passing the British Film Institute in Southbank, large screens showed old footage of mourners queuing to see George VI lying in state – and we realised little had changed, except for perhaps the more relaxed dress.

When we reached the London Eye we received the coveted wristband, which felt like a bit of a milestone. It allowed us to pop out of the queue and grab refreshments, or use the appropriately placed portaloos, which were in as acceptable a condition as they could have been.

It felt like we were almost there until we hit the horrific zig-zag part of the line in Victoria Gardens, which although was pretty much constantly moving was ridiculously long.

I’d been patient up until this point, but after three hours in I was starting to become a little fed up. But I’d come too far to give up – and made some new friends who I wanted to experience this moment with.

When her passing was announced it rippled across the planet

Author Andrew Halas, 70, told Metro.co.uk: ‘I was lucky enough to actually live for the entire reign of the sovereign Queen, and I just feel that she’s been such a part of my life because she’s always… been there.

‘That’s strange [because] I’m not really a royalist, but I just feel that I needed to pay my respects to a human being who was a really good person. But we’re never going to see the likes of the Queen I don’t think, certainly not in my lifetime and possibly not for another two or three generations to come. So this is the end of an era; I see this as closure, and I just feel that it’s the right thing to do.

‘Even though I haven’t seen or met the Queen in any shape or form, I just feel somehow, indelibly, she’s made a connection with people of my generation and my ilk.

‘She is, I think, an incredible human being. The whole world knows about the Queen of Britain, and when her passing was announced it rippled across the planet.

‘What person could you possibly tell me about who would have the same impact? I can’t think of anyone. Not one that has such amazing diligence, integrity, constancy, honesty and just a decent human being. So that’s why I am here.’

When asked about the length of the queue, Gravesend resident Andrew – whose pen name is Drew Salah – said it ‘wasn’t as bad as I was anticipating’.

‘They were frightening us with 30-hour queuing and overnights sitting out, but it’s not been too bad,’ he added.

‘We’ve been in the queue for about four hours now, we’ve got about another hour to go but you meet some wonderful people and it’s been a real pleasure, a marvellous experience and I won’t forget this.’

Finally we reached the Palace of Westminster, and were immediately told to ditch all liquids and food, and switch off our phones.

Airport-style, we had to go through security in a marquee – and they really do want you to get rid of everything. One person in our group was aghast at being told to throw her beloved Mac lipstick away.

But all that was forgotten when we walked through St Stephen’s entrance towards Westminster Hall, exactly four-and-a-half hours after we started.

We immediately fell to silence as we entered without anyone needing to be told. It was almost as if the very presence of Her Majesty’s body in the room commanded complete and utter respect which was buried somewhere within us.

Soldiers in ceremonial uniform are holding a completely still 24-hour vigil around the Queen’s coffin, which is draped in the Royal Standard and topped with the crown jewels and a floral bouquet.

Taking the time to glance around the room, the majority of people had done the same as me and naturally split away from the friends and relatives they came with to have a moment alone.

Although dozens were in the room, it felt strangely private to look upon any individual, whether they chose to pay their respects by bowing, curtseying or with a quiet nod. Everyone was solemn, respectful, and mostly wearing dark colours with several in suits.

A loud double tap in the hushed room signalled the changing of the guard, and staff stopped us from continuing to walk through.

We watched as the soldiers slowly walked in to take over, and the previously unmoving guards suddenly came to life as if they were puppets. They rotate every 20 minutes, but the hours of remaining completely still while standing are six hours in length.

After we were allowed to move across the hall again I took a moment to look at the coffin when I was directly side-on to it, and the Imperial State Crown seemed to glitter astonishingly in the light.

I saw the crown jewels years ago at the Tower of London, but I don’t remember them being quite so bright then – though perhaps that’s in my imagination.

As I left the room, many hesitated at the exit to take one final look at the coffin. When I walked out into the fresh air many were wiping away tears and hugging each other.

I found my partner and we walked away silently, neither of us wanting to speak first.

But thrust back into the heart of Westminster surrounded by reporters and cameras, we were quickly jolted back to reality.

Sarah McKeon, 30 and a charity worker, told Metro.co.uk: ‘I thought it was incredible, and actually I felt more emotional than I thought I would – seeing the coffin laid out and seeing the crown on top of it, and how quiet everyone was and the vigil.

‘Seeing the changing of the guard is really special, and seeing how they do that and the “choreography” of the soldiers is amazing.

‘It did feel really special to go and see it and pay your respects, and it is genuinely a once-in-a-lifetime opportunity – you’re never going to be able to do this again.’

Before getting on the Tube to make my journey to the office, our bizarrely matched new group of friends reunited to bid one another goodbye, and said we’d stay in touch.

Not only had we conquered ‘The Queue’ in all its Britishness – but we’d also had an unforgettable morning seeing a part of history unfold.

Christmas rules in tiers 1 to 4: Everything you can and can't do