As I ran through Battersea Park on a brisk July evening, my mind drifted to Ukraine and the people whose lives had changed forever after Russia’s invasion earlier this year.

I was running for them, our cause, and our collective grief for a peaceful future that was brutally taken away from us.

On 24 July, I chose to embark on my toughest challenge yet – one that would test my mental and physical strength to levels I could not yet compute and that would restore my faith in humanity.

The date marked 31 years free from Soviet rule and I hoped by running, I would remind the British public of the ongoing war devastating my homeland and to encourage people to keep talking about it.

London has been my home for 15 years but I grew up in Lviv, in west Ukraine. It’s a beautiful city – small in size and dotted with grand architecture.

As a child, my sister, cousins and I lived in the countryside with our grandparents. There were five of us playing in open fields and woodlands, while our mothers worked and lived in the city.

I was always fond of running. I spent most of my younger years galloping about outside but my real passion for the sport developed at school when I realised I was actually very good at long distance events. Where my peers succeeded at the 100 and 200 metre sprint, I appeared to have stamina on my side.

I moved to Lviv with my mother when I went on to pursue further education, and after passing my exams, found myself yearning for a new adventure – London was calling.

When I arrived at the age of 18, I was overwhelmed by how low the sky felt against towering skyscrapers. Speaking very little English, I lived with my aunt in Wimbledon, where I taught myself the language, enrolled in art school, and got myself a job as a nanny – all before retraining to become a personal trainer.

My journey to the UK was peaceful and of my own free will. It was exciting and an adventure that would eventually influence so much of the character I carry today.

However, it wasn’t the same story for my family. My mother, sister and her two young children – like many others – had to flee war-torn Ukraine earlier this year for the sake of their lives.

They bid farewell to fathers, brothers, and husbands to seek refuge wherever they could. My mother, sister and her two young children – my niece and nephew – made it to the UK months after fleeing and travelling through Poland (in March and April). The men in our family remain in Ukraine.

As I sat in the comfort of my London flat in February, war was unfolding on a large scale and my family left their homes in a race to cross the border to safety. It was an indescribably sad and terrifying time for us all. 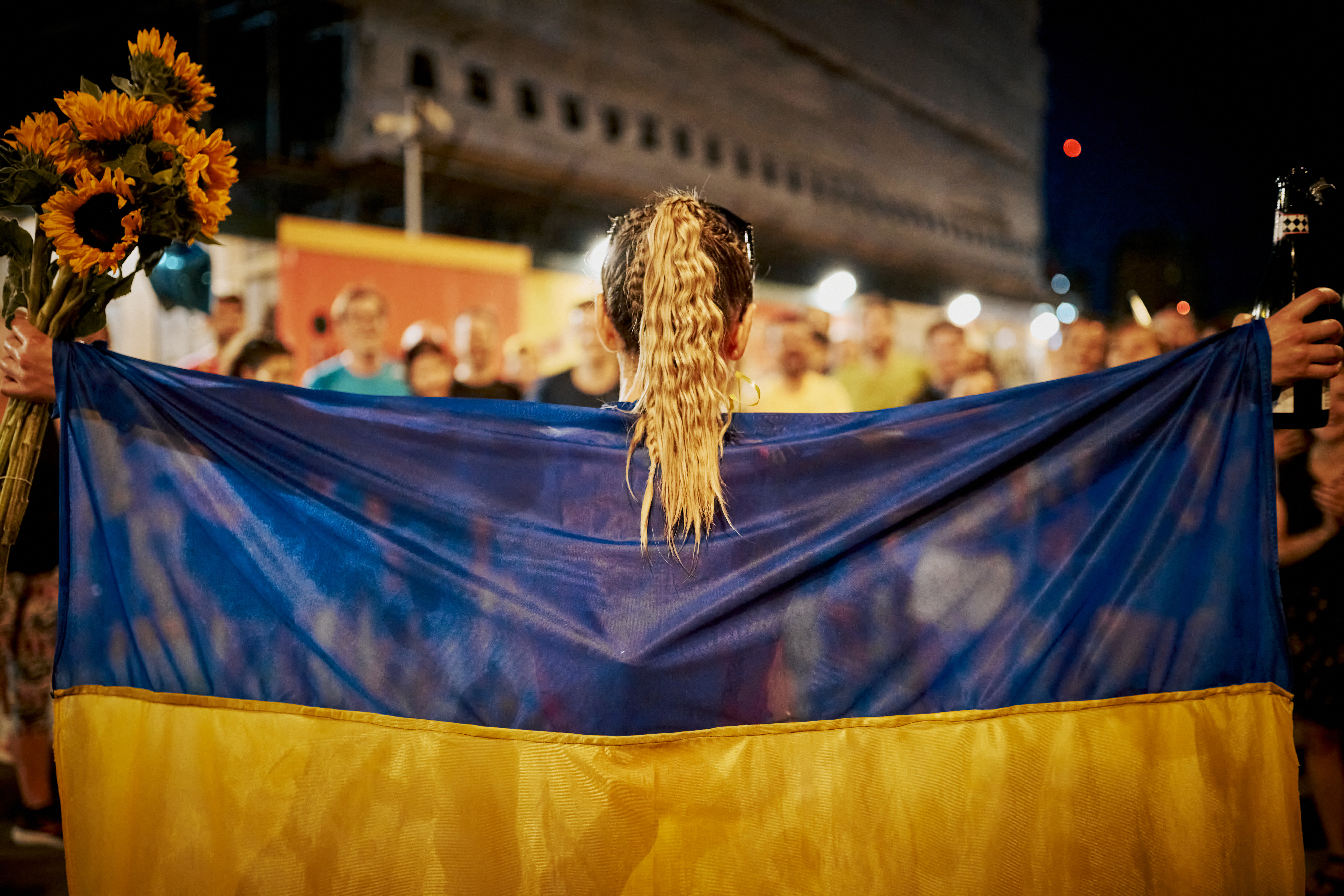 Following many sleepless nights and feeling helpless, I noticed anger was the responsive emotion building up inside of me as war wreaked havoc across Ukraine. It was – and still is – painful to see what was happening to my family and the people of my country.

It’s been six months and war is not over. So, in June, I came up with the idea to embark on my running challenge. I’ve always been eager to take on an endurance event but I never felt I had the right purpose to go ahead and set the challenge – until Russia’s invasion.

I started my 600-mile journey on Sunday 24 July in Parliament Square and finished my first day at the Ukrainian Social Club. Parliament Square is close to my home in London. It’s also where we hosted many of our organised rallies and – to me – embodies so much of the London I love.

I mapped this route out to create a physical representation of how I might run from London to Ukraine. I needed to feel like I was running home that day. There were other routes, some created by me, but others by a wonderful team of friends who volunteered their time to support me.

Each route started in central London and directed me out to areas of London I was yet to explore, such as Richmond Park, Walthamstow and the breweries of Hackney.

With a fundraiser live, those first steps felt absolutely amazing. All my planning had focused on this exact moment and I became very aware that with every step, I was heading closer to a finish line.

That first week came with a lot of lows because I felt overwhelmed by how ambitious I’d been. I feared I would not complete it, struggling through the heat and arranging 20 mile runs around my fitness coaching clients and family commitments, such as my mother’s medical appointments. She is sadly struggling with her health and I am needed to help translate the updates from her doctor.

My body hurt a lot in those first days, and there were times I had to stop, catch my breath, have a pep talk with myself and refuel before getting back to it. This, I now realise, was my body adjusting to the physical efforts I was putting it through.

It eased in week two and by week three – dare I use the pun – it became a walk in the park. Why? Because my body and mind settled into the rhythm and pace I had challenged it to do. Never had I put myself through anything like this before, and even now, I can’t just stop. I have to keep moving to avoid injury.

Each day, my friends broadcast my routes on Strava to running communities across London. Anyone who wished to join, could. Those that didn’t want to run could participate in whatever way they felt comfortable doing. Some did 31 jump ropes a day, others enjoyed doing 31 yoga sessions over the month, while some donated 31 hours of their time to volunteer with Ukrainian support groups.

A huge WhatsApp chat of running community members kept me energised with words of encouragement. The challenge brought a lot of positivity.

It set a purpose and intent, introduced me to many new people, enabled conversations with passers by and reminded me of all the beauty the City of London has to offer. Each day, I would run on behalf of a Ukranian city affected by the war, and there was this wonderful parallel where I could explore 31 new routes across central and greater London.

On the final day on Wednesday 24 August, I was greeted at the Ukrainian Embassy by over 30 runners to carry me through my final 10km – all wearing blue and yellow. It was so beautiful.

We ran via the Ukrainian rally – an initiative that meets three times a week – outside Downing Street and where I was invited to speak about my challenge. The finish line was on the north side of the millennium bridge at St Paul’s. There was a sense of peace and fulfilment at completing a task that was so incredibly meaningful to me, particularly where I had experienced so many moments of self doubt.

Rather poignantly, my final leg, also marked a full six months since Russia invaded Ukraine, resulting in the tragic loss of innocent life and bringing war to Europe for the first time in over half a century.

Since then, many people have kindly said how proud they are of me. I find this unusual because I’m the type of person that struggles to accept praise and I’m not one to recognise my achievements.

Running shy of 1,000km and raising almost £15,000 in the month is a fantastic triumph, but it’s a double-edged sword as war continues. My family are still navigating their new life in the UK and the impact of the invasion is being felt worldwide.

I’m conflicted as to how else to help but together, we can, and it’s as simple as us all continuing to talk about what’s happening in my homeland and learning about our history and culture.

I want people to understand how much the people of Ukraine are impacted by this war. The people of my country are suffering and need help.

The biggest problem the Ukrainian people will face soon – particularly in the UK – is housing. The sponsorship scheme will be ending soon and with the cost of living on the rise, many Ukrainians will not be able to afford increasing prices without support.

Like my mother, many Ukrainian people now living in the UK don’t speak English and are heavily reliant on the kindness and patience of the British people while they adapt.

I can’t determine what the future holds for my family and the people of Ukraine. It’s yet more uncertainty for all.

Of course, we hope the war will be over very soon but it’s not showing signs of slowing down. I can only hope that my people are able to live in peace again, back in their homes and restore their former lives.

I will continue to fight for Ukraine in any way I can. So long as the conversation surrounding Ukraine’s arduous hardship exists and remains front of mind, I’ll have done my job.

You can donate to Olga’s JustGiving page here.