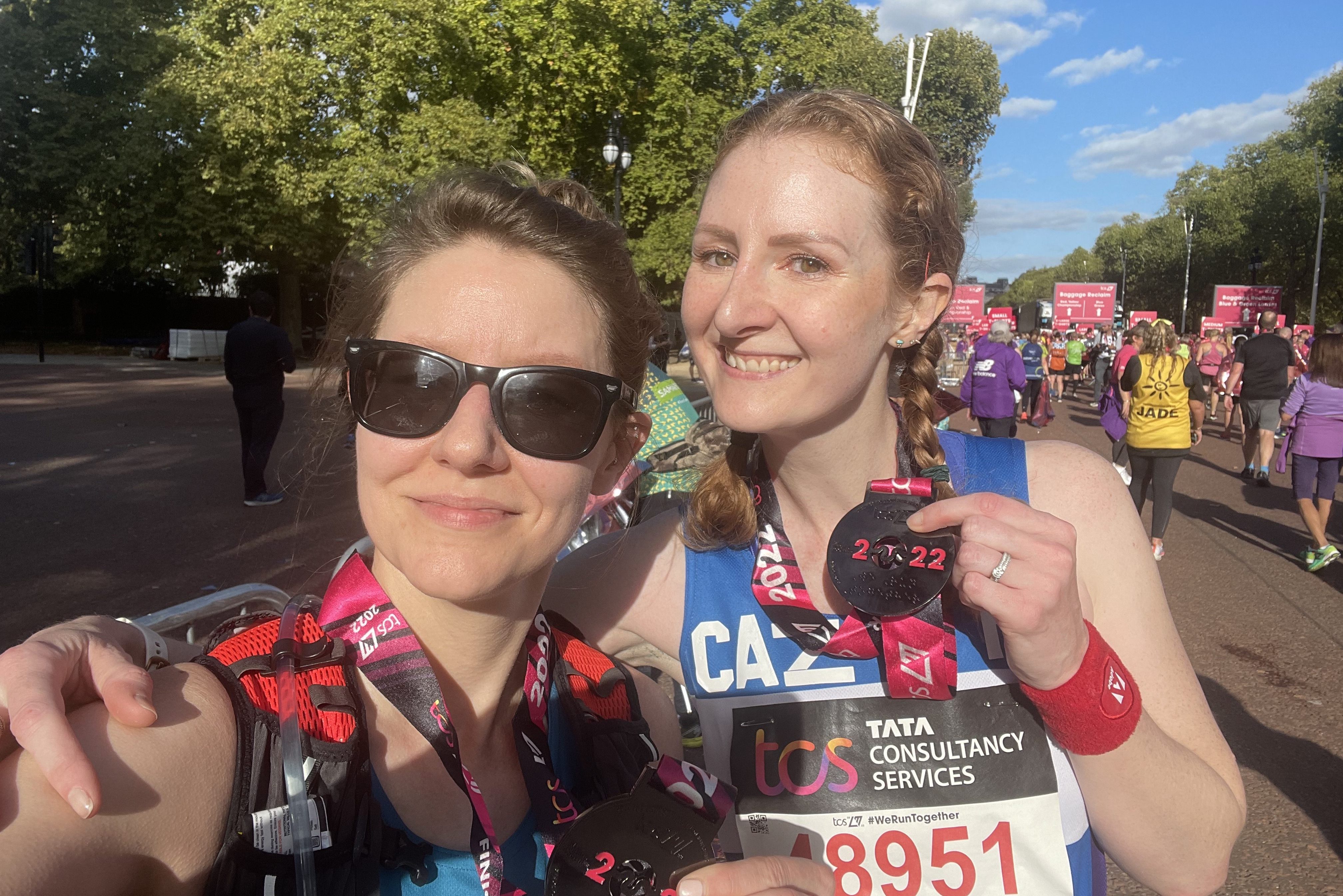 Yesterday, I ran my first marathon. And I loved it.

Why did I love it? Was it the almost five hours of constant running (very slowly)? The feeling of my quads turning to rock with each passing mile? Or maybe choking down those famously delicious energy gels to keep going?

No. I loved it because of each and every person lining the course and cheering us all on.

I’ve been on the sidelines before, clapping for runners in their thousands as they file past in varying states of ecstasy and agony. Some thriving and striding by, others looking as if they’re seriously reconsidering all the life choices that brought them to this point.

There are now photos of me in both states, and what I didn’t fully understand before then was, wherever you’re at emotionally (and it is a rollercoaster), the crowd will carry you through.

It was on London Marathon day 2021 that I decided to run this year, essentially also committing to raising a small fortune for charity as there are so few ballot places available. Soon after I forced my sister Caroline into joining me, and on 29 March we both got places for Age UK. The journey had begun.

Fast-forward through training – plagued by small niggling injuries that took most of the fun out of it – and by 8.30am on Sunday, 2 October, Caroline and I stepped off the DLR and joined the tide of runners and supporters pouring into Greenwich park, the air thick with nerves and Deep Heat.

Unfortunately an admin error resulted in Caroline and I being assigned different starts, making completing the race together somewhat more tricky.

However, from the second I crossed my start at 10.50am (by which time the pros were more than halfway) until we met up, I was never alone.

Bleachers full of supporters morphed into crowds on the heath as we began our journey entirely the wrong way, the London skyline behind us and the road to Kent ahead. Heath turned into houses, in front of which stood their residents, giving up a precious Sunday morning to lift tens of thousands of strangers in the first of 26 miles.

The pre-Greenwich stretch is rarely touted as a vintage leg of the race, and having done big half-marathons with quieter patches such as the Great North Run and Big Half, I was expecting a few crowd-less spells early doors.

How wrong I was.

No matter that Woolwich Road isn’t blessed with iconic sites for the BBC cameras to beam around the world. Families, friends, partners and local residents still lined the course – maybe not five deep, and even with a few breaks between groups, but there they still were, charting our course. An early appearance from a former colleague was an added bonus, a familiar face among the cheering crowd.

And come the Cutty Sark, six miles down, 20 to go, things went up a few gears. Packed against the barriers as if they were front row of a festival, adults and children whooped and cheered, called out names, rang cow bells and clapped inflatables.

At this point Caroline and I were cockily confident, absolutely cruising around – as well we should have been with less than a quarter of the race under our belt. The crowd gave us atmosphere, excitement, the feeling of being part of something huge.

From Greenwich to Tower Bridge, the halfway mark, is my stomping ground. I knew the course inside out – where the road was ropey, where it narrowed, and that it was ever-so-slightly uphill most of the way.

Turns out, you don’t notice that when you’re being cheered the whole way and can distract yourself with the myriad signs along the way, from ‘I believe in you random stranger’ to ‘Way to show the government how to run things’. There were many iterations of that one.

And my local. Well, let’s just say I know where I’ll be spending next marathon day, spilling out onto the street holding a drink and dancing as the runners flow past. What a vibe.

Canary Wharf is another leg favoured by few. Again, having previously lived on the Isle of Dogs I knew the route too well, and never has that little bend in the river felt so long.

Yet still, there they were, the crowds. Hands holding out tubs of jelly babies and wine gums – or in one case, cheese and grapes – a classy touch. Signs made for friends, family and partners, and signs made for strangers. Rows of children offering high fives as we passed – Covid showing no sign of dampening this age-old tradition.

The crowds thinned slightly on our way out of the Wharf, but were massively boosted by the surprise appearance of another former colleague.

At this point I’d missed two friends in the crowd as I went by – disappointing for us all, as a familiar face is an extra boost, and it’s no mean feat battling the crowds and getting to the exact spot you told a runner you might be. Indeed, being on a cheer team can be hard work – and I did get a chuckle passing a woman on the 18th mile when I was struggling a bit who lamented how tiring the day was.

I feel her pain, for while she’d been cheering for hours, I’d been running almost as long. But I’ll be eternally grateful, for without her and the hundreds of thousands of others celebrating our big day, it simply wouldn’t have been the same.

Of course, running it with my sister made the event extra special, and my boyfriend deserves his own medal for cycling approximately 26.3miles in order to cheer us on at more spots than can I remember.

But there’s no doubt that the unwavering blast of energy from the sidelines, pushing us along and drawing us ahead, distracting us from the pain and making us feel like absolute rockstars, made sure what is – let’s face it – an unnaturally long, painful slog was one of the best and most memorable days of my life.

So thank you, very much, to each and every person who gave up their day to make ours.

Sarah Ferguson home: How Fergie has a room at Prince Andrew’s royal residence