Home » Europe » I was a slave to Giggs’s every demand, says ex 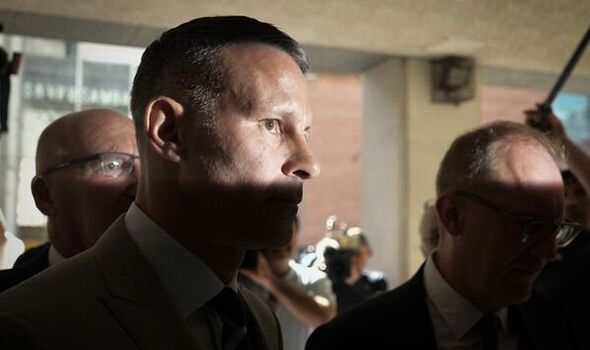 Giggs, 48, denies subjecting Kate Greville, 36, to years of controlling and coercive behaviour, headbutting her and attacking her younger sister Emma at his £1.7million mansion in November 2020.

While being cross-examined by Giggs’s barrister Chris Daw QC, Ms Greville said that when the businessman and ex-player told her to do something – she would do it.

Yesterday she said she felt like “a slave to his every need and every demand. That is what it felt like. When Ryan said do something, I would do it.”

“There was resistance but he made me feel I had to do what he said, otherwise there would be consequences.”

She denied bruising that she claimed was caused by the Old Trafford legend was actually from “rough sex”.

Ms Greville told the jury Giggs pulled her naked from a Dubai hotel bed, onto the floor and across the suite before he threw her belongings into the corridor.

The court heard that Ms Greville told a friend who noticed her bruise from Dubai in September 2017 that it was caused by “rough sex”.

When quizzed by Giggs’s barrister about why she had not said anything about an assault, the PR executive said it was because “I was embarrassed and didn’t want to admit it”.

The court also heard about a message she sent to Giggs saying her “sex bruise is coming along nicely”.

In another she wrote: “I want you so badly rough” to which Giggs replied: “I’m scared of hurting you.”

When her then-boyfriend sent pictures of sex toys including handcuffs saying: “You asked me to be a bit more assertive”, she replied: “Amazing.”

The PR worker said they first had sex in December 2014 at a hotel and she left her husband the following February.

The court heard police wanted Ms Greville to hand over her phone as part of their investigations but she told them she lost it at the end of last year when it fell in a river. Later another phone went missing when she was mugged.

She was told data could be retrieved from iCloud but she did not want details of her business revealed. Giggs’s lawyer said: “You were worried there was material on the phone that would discredit you as a witness.”

Ms Greville was asked about sex videos the couple made and an email from Giggs titled Blackmail with a video clip.

This was sent after the pair rowed and Ms Greville had blocked him on WhatsApp. She told police she suspected the attachment was “one of our videos that we had done”.