Home » Europe » ‘I was the guy who said Yes!’ – Bomb hero is Britain’s bravest 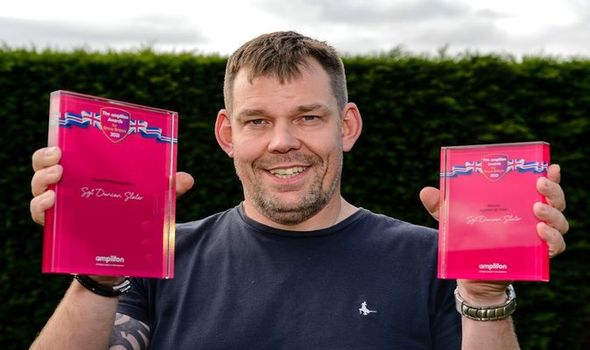 Following extensive treatment, Duncan Slater decided to dedicate his life to charity. He has raised thousands of pounds for Help for Heroes, the RAF Benevolent Fund and for Walking With The Wounded. The 42-year-old sums up his story as: “I was the guy who instead of saying No, said Yes.” He was yesterday judged overall winner at the Amplifon Awards For Brave Britons, an annual ceremony supported by the Daily Express.

In 2009, Duncan’s vehicle was blown up in Helmand, Afghanistan. The blast broke almost every bone – but not his determination.

After Duncan, from Diss, Norfolk had spent five months in hospital, a friend suggested they should cycle from Land’s End to John O’Groats. He said: “It was just a case of ‘Do your best’ but we cracked it in 10 days. It gave me such a buzz.”

Since then he has completed the London Marathon, become the first double amputee to reach the South Pole and finished the gruelling Marathon des Sables in the Sahara. The awards celebrate the courage and strength of ordinary people who achieve extraordinary goals.

The ceremony, held via Zoom, was hosted by BBC One Breakfast presenter Rachel Burden. She said Duncan – who also took the Against All Odds title – had achieved “what 99 per cent of us would shake their head to. Duncan, we bow to you.”

Duncan said: “You can be different and still go out and do things.”

Joan Willett, 105, won the Active Agers category for walking 17 miles during lockdown, exercising daily on a hill near her home in Hastings, East Sussex and raising more than £60,000 for the British Heart Foundation.

Young Hero was Max Woosey, 11, who raised almost £800,000 for a hospice by spending more than 500 nights in a tent in his back garden in Braunton, North Devon. The funds helped the North Devon Hospice keep services open and staff employed when income collapsed during the pandemic.