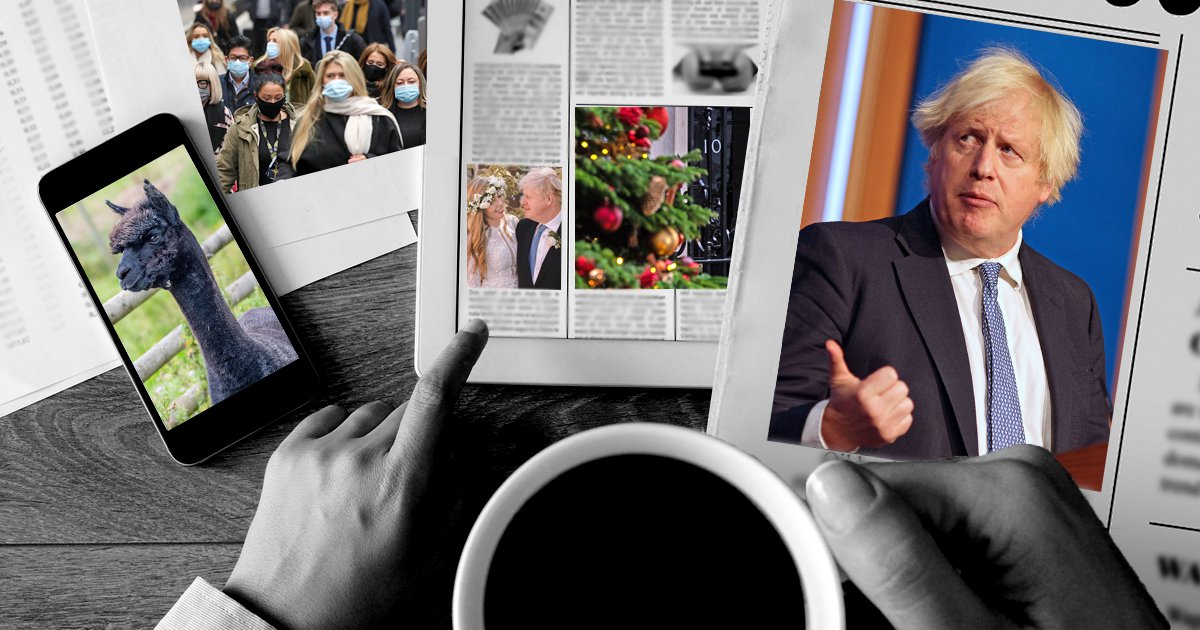 I don’t know about you, reader, but over at Metro.co.uk, we are ready for some wine and nibbles.

And when we say wine and nibbles, we mean wine and nibbles. Pints of Echo Falls, buckets overflowing with vol-au-vents and chipsticks, cans of Stella for dessert. That sort of thing.

Why? Because on Monday morning, Boris Johnson rolled out his four-poster bed, staggered over to his dressing room mirror and made a promise to himself.

Ruffling his hair and fastening the knot on his open satin kimono, we imagine he looked himself in the eye and muttered in a low rasp, so as not to wake Carrie: ‘I’m going to ruin their week. All of them.’

And he did. For those of us engaged in this little corner of showbusiness we like to call ‘the news’, this week has been a tiring, dizzying exercise in Boris-watching – and, credit where credit is due, he has not disappointed.

We have been treated to a festival of Johnsonism, an era-defining performance in the art of Boris.

Weren’t paying attention? Good for you. Sit back and let us explain what the hell happened.

Locked and loaded in Downing Street

When is a party not a party? This is the vexed question haunting Westminster. It turns out that after the government pulled the plug on The Session last winter, it may have been very much continuing behind the door of Number 10.

Allegations have been swirling for a while but a leaked video of the PM’s aide Allegra Stratton joking about an event seemed to provide the strongest evidence yet that Downing Street was the place to be at a time everyone just wished they were anywhere else. She was tearfully thrown under a big red bus by Boris Johnson but it wasn’t enough to stop the scrutiny.

The PM was ‘sickened’ to discover gatherings may have taken place in Downing Street (which is, of course, also his house) and ordered the cabinet secretary (who works in Downing Street) to get to the bottom of this mystery.

The complicated bit: that probe has now been expanded to also cover an alleged leaving do in Number 10 on November 27 and another party over at the education department’s HQ on December 10. Not-at-all-bitter ex-aide Dominic Cummings claims there was also a party in the PM’s flat in November – that one isn’t currently being investigated (and the Met is much too busy to investigate any of them).

Ant and Dec have trolled the PM mercilessly on primetime TV every night and the Tories have fallen behind Labour in the polls. Allegations of the government not taking its own lockdown rules seriously are nothing new – but for the first time this week, that perceived cavalier attitude has truly rattled the very centre of power – and who knows what it has shaken loose?

TL;DR: An aide has resigned and an investigation has been launched over a party that – according to the government, did not happen.

Plan B and Square One

While everyone was getting angry about what went on during the last lockdown, the government was busying itself with introducing the next one. It’s not as bad as it was last time – Covid passes for some venues, masks in shops, working from home – but it does feel very much like we’ve been here before.

Omicron is spreading like wildfire and health officials still can’t say with any confidence how effective the existing vaccines will be against it.

In a move so exquisitely awkward it seemed scripted, Mr Johnson was forced to announce the new measures from the very expensive podium where his aide was filmed joking about the Downing Street gathering, less than 24 hours after the footage had been beamed into every home in the country.

The PM was on a sticky wicket: by any reasonable standard, the worsening Covid-19 picture seems to justify a change to the rules – but in the context of his job being under threat, the whole thing was always going to look like a desperate ruse.

Some of his own MPs accused him of rushing the new restrictions out to divert attention and he will be forced to endure what looks set to be the biggest backbench rebellion of his time as prime minister when the new rules go through the Commons next week.

Polling has found the public are appalled by allegations of partying in Downing Street and are less likely to respect the measures as a result. It’s hard to imagine a worse time for the prime minister to earnestly ask us all to rein it in.

TL;DR: Boris Johnson, who has absolutely followed all the rules at all the times, would like you to follow more rules. Okay?

Papering over the cracks

While Mr Johnson was fighting fires on those two fronts, a third was being stoked in the background.

Questions over who paid for the refurbishment of the Downing Street flat have dogged the PM for months. In short, a rather convoluted arrangement was agreed between a Tory donor with a holding company and the Conservative Party for the cost of the lavish redecoration to be covered (the eventual bill ran to well over £100,000).

On Thursday, the Electoral Commission fined the Tory party – which disputes the findings – and slated its transparency processes for failing to declare the money properly. That was bad enough but might have at least drawn a line under a row which has been an awkward problem for the government. Enter Boris.

The problem is, the commission uncovered a WhatsApp message from the PM to the Tory donor back in November 2020 relating to the refurbishment – but when the matter was investigated previously by the government’s own sleaze adviser, Mr Johnson said he only became aware of the source of the funding in February. Labour says he lied; he says he didn’t. It is, to put it bluntly, another mess.

TL;DR: Boris Johnson has managed to turn getting new wallpaper into an honesty crisis.

Like him or loathe him, it must be exhausting being Boris Johnson. Picture the scene: you’re the prime minister, your political future is hanging in the balance, scandal is engulfing your administration, you’re preparing to impose restrictions on the country and investigators are asking more questions about your chintzy rug. And then your phone rings. You’re required at the maternity ward.

The PM had to take a break from this flaming wreck of his own making to dash to the hospital to be with Carrie as she gave birth to a daughter; the couple’s second child since entering Downing Street.

We’re not judgemental types here at Metro.co.uk but it’s probably fair to say Mr Johnson’s private life and romantic history are complicated. It has been difficult to say with total certainty how many children he actually has but it’s widely believed this is his seventh.

It’s terrific news for the couple and you’d have to be a special sort of killjoy not to be anything other than pleased for them – but my God, haven’t they got enough on?

TL:DR: Congratulations, Boris and Carrie – we bet the christening party will be a riot.

It wasn’t that long ago the entire country became bizarrely invested in the fate of a scruffy looking horse called Geronimo. As a nation, we first learned together that this goofy steed was in fact something called an alpaca, which is absolutely not a llama. And then we discovered en masse that this cheery not-a-llama may or may not be riddled with bovine TB.

With a government gunman poised to send Geronimo to alpaca heaven, these islands became divided in a way unseen since Brexit. Some of us saw an unfairly maligned, noble creature – a perfectly healthy specimen which had fallen victim to a cruel and flawed state bureaucracy. Others saw a consumptive horse-gone-wrong that probably needed to be disposed of before it was able to infect anything that might grow up to be delicious.

Geronimo’s anguished owner was adamant that the two positive TB tests it had returned were innacurate and pleaded for leniency to no avail. Now the government’s chief veterinary officer has confirmed a post-mortem investigation was unable to establish that the animal did have TB after all, four months after it was put to death. This, it is fair to say, is not a great look.

Metro.co.uk would not stoop to drawing any parallels between the fate of a doomed tousled alpaca and current leadership manoeuvres in the Conservative Party.

TL;DR: Whatever you’re doing this weekend, pour one out for Geronimo.