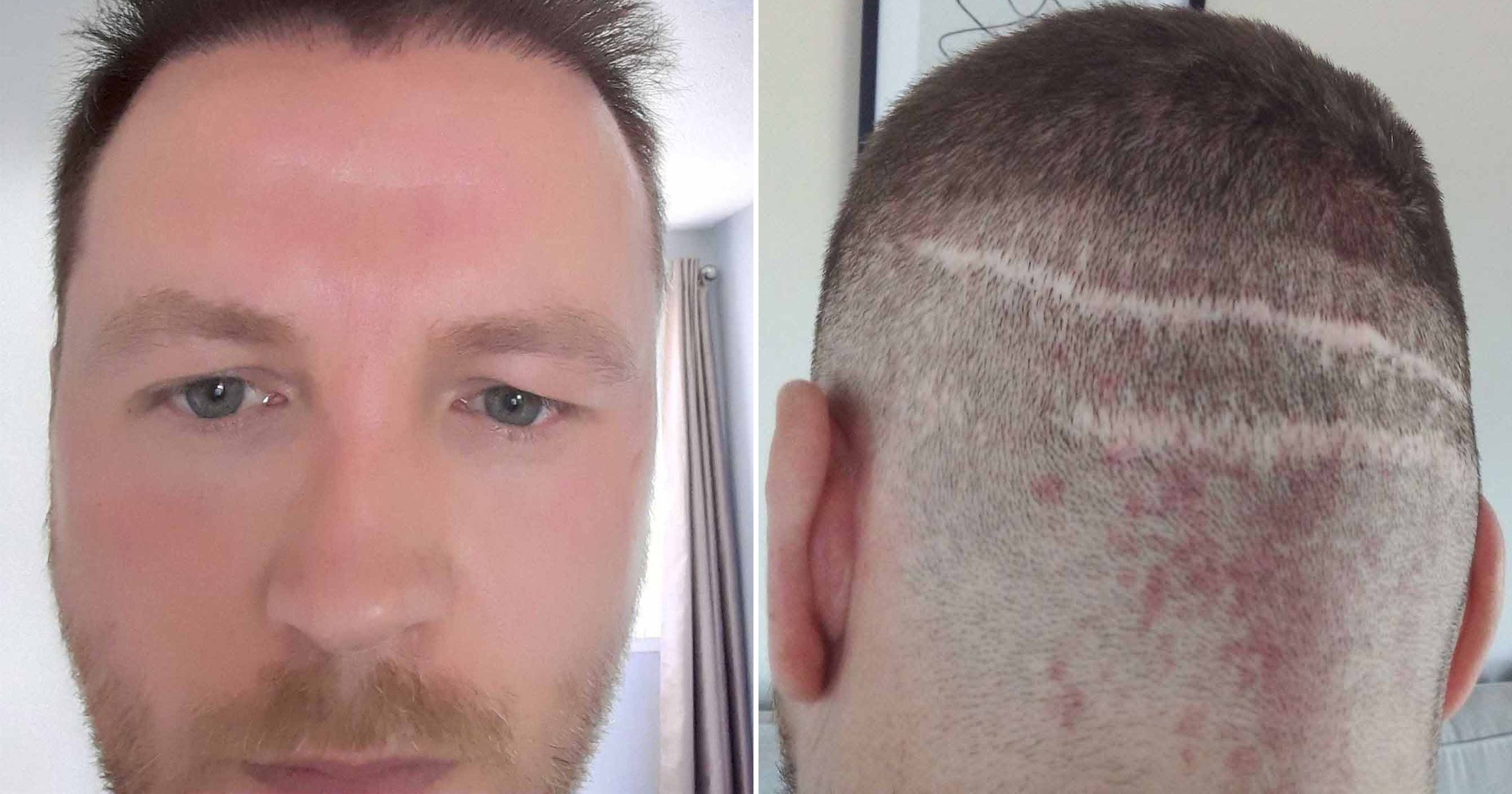 A hair transplant surgeon believes ‘someone is going to die’ if the industry does not become more regulated.

Dr Manish Mittal, who runs his own hair transplant clinic in London, is worried about the ‘sustained increase’ in men coming to him for help.

People who end up ‘looking electrocuted’ after paying thousands for the procedure are getting their ‘lives ruined’, he said.

One of his clients, Phil Whitehouse, told Metro.co.uk about how his two hair transplants in the UK left him worse-off.

The 43-year-old, from Telford, Shropshire, started to notice his hair was receding when he was just 18 and had his first hair transplant at the age of 23, in 2003.

But he was left with a thick scar on the back of his lower head.

Meanwhile, hair moved to the front of his hairline stuck up ‘like a toothbrush’.

In desperation, he flew to New York to try and get the transplant fixed in 2008 but he ended up being left with a second strip scar under the first one.

He also suffered shock loss, meaning the original hair surrounding the transplant fell out because of stress.

After complaining about the results, the clinic offered to remedy the issues for free, by trying to disguise one of the scars better.

But Phil experienced shock loss again and was left with a one-inch gap between the transplant and his original hair.

‘My own hair would flop down but the transplants would stick up,’ he said.

Now, more than a decade later, Phil still can’t leave the house without covering his head.

He said: ‘It made me feel really depressed. I would only go out in a cap and couldn’t go to nightclubs. It ruined my life for a couple of years, but I’ve got used to it.

‘I’ve tried different styles and growing my hair long. The transplanted hair goes upwards when it grows long, and looks like a cow’s lick. It’s just a mess.

‘I don’t know what to do. I’m thinning every month and the transplants are looking more noticeable.’

Dr Manish believes Phil was ‘probably too young for a transplant’ and should have been put on medication for two years before even being considered for a procedure.

‘If Phil had been taking hair-loss stabalising medication at the time of his first hair transplant, his shock loss could have been minimised,’ he said.

Dr Manish has spoken out about his clients because he thinks his industry is dangerously unregulated.

He told Metro.co.uk about how he had to tell a 49-year-old he was ‘too far gone’ for any repair work.

The man, from Bedford, had already spent more than £10,000 on three procedures – one in Turkey and two in New York.

He did not take hair loss stabalising medication after the surgeries and this meant he continued to go bald.

Dr Manish said: ‘Just to put it into perspective the kind of emotional turmoil it’s had on him: He’s lost his job, he’s lost his wife, he doesn’t see his kids.

‘He stays at home all day every day literally. That’s his quality of life now. He’s so depressed it’s unbelievable.

‘He was losing hair aggressviely, he should have been advised to take hair loss stablising medication.’

Dr Manish says many clinics are taking in too many patients and then leaving technicians to perform the actual incisions during a surgery instead of a doctor.

He said: ‘When you go to budget clinics here, there’s a reason why they charge you £2,000.

‘It’s because you’re going to be one of six, seven, eight, nine, 10, however many patients, so that means that the doctor’s attention is going to be divided.

‘Technicians, who are not medically trained, are performing the vast bulk of the surgery.