Home » Europe » In Photos Unpublished for 100 Years, the Joy of War’s End on Armistice Day

The Great War was over. One hundred years ago — just before 3 a.m. on Nov. 11, 1918 — The New York Times received the first bulletin of the Armistice, which had been signed aboard a rail car in a small village in Northern France. A searchlight on the tower of the Times building, previously used to announce election results, gleamed rays across the city until daylight broke.

After more than four years of fighting, 8.5 million soldiers had been killed, including more than 100,000 Americans, and 7 million civilians were dead. In that time, modern warfare was born, and the trenches of Western Europe became a charnel house.

As news spread of the war’s end, people gathered in parks, streets and town squares, overwhelmed with jubilation on what is now officially celebrated as Armistice Day. In pictures from New York, Paris and London, The Times chronicled the ecstatic celebrations. (The dramatic images ran mostly in the Mid-Week Pictorial, a picture-driven publication started by The Times in 1914, in part to bring readers images of the war. The original captions are quoted with each photo here, along with the date of publication.) 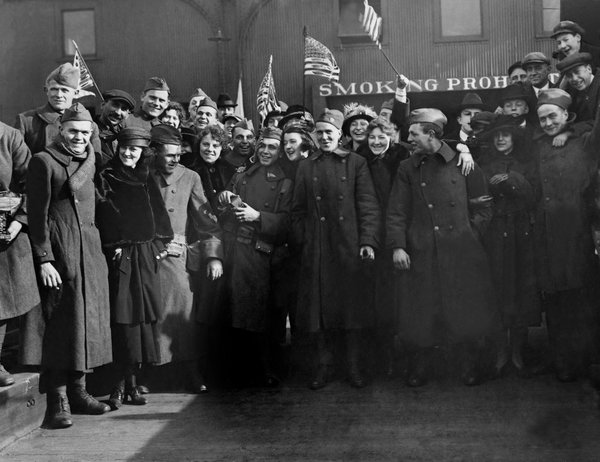 “It was a mystery to all where they came from,” the paper wrote of the gatherings in Manhattan. “Many came out of the subway, others came out of the restaurants, cigar stores, and other places that remain open all night. This throng was increased by drivers who left their milk wagons, their newspaper wagons, by men on their way to work, by taxicab chauffeurs, by streetcar conductors, and by many other folk who had heard the tooting of sirens in their neighborhoods and who arose from their beds to find out just what was the latest event of a day that will be marked forever in history.”

The war had changed the world irrevocably, and these images depict just a small number of the people impacted. No matter their standing in society or role in the war, on Armistice Day they were all celebrating peace.