VENICE, Italy — Near the Accademia Bridge, a corridor of thin trees lay horizontal, as if hit by a nuclear wind. Vaporetto tickets, pigeon feathers and candy wrappers floated in stagnant pools around St. Mark’s Basilica. Saltwater seeped into the private gardens and poisoned rose bushes behind stone walls.

And children sidestepped the spillover from the canals as they trick-or-treated in Venetian masks and witches’ hats under the Rialto Bridge.

On Wednesday, Venice’s lagoon subsided and revealed the damage a violent storm had wrought on the city earlier in the week, one of the worst episodes of flooding in decades. Windblown tides reaching 61 inches above sea level had submerged more than 70 percent of the city.

On Thursday the water returned again.

Some tourists frolicked in the filthy water and dined in restaurants as it lapped at the calves of their rubber boots. Locals instead worried about the saltwater eating its way through the city’s treasures. 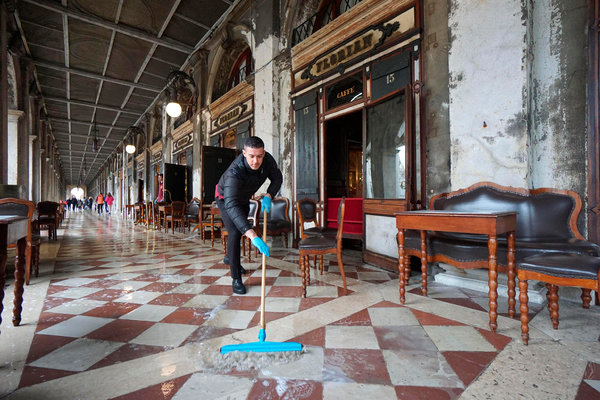 “Here it’s solid,” said Pierpaolo Campostrini, a member of the board responsible for managing St. Mark’s Basilica, as he knocked on the marble facade of the structure, as if listening for a secret passageway, “But here it’s empty. We have a splitting here in the brick and the plaster. The water did this.”

He explained that “unlike an earthquake where you see the damage right away,” the constant water infiltration, accentuated by dramatic events like this week’s flood, would reveal itself only over time.

The building’s bricks sponged the water up, and as the water rose, the danger became more acute to the 8,450 square meters, or about 91,000 square feet, of fingernail-size mosaic tiles that give the basilica its stunning golden shimmer.

The water had already taken its toll on the marble columns, brought from Byzantium centuries ago. Mr. Campostrini pointed at one base, now a corroded green crumble next to an empty cup of pink strawberry gelato.

“It’s not just global warming,” he said. “But the episodes are more severe and long.”

After about 1,000 years, Venice is imperiled by its sinking foundations and rising waters as well as the hordes of tourists arriving on cruise ships and low-cost flights. They clog the narrow streets and have pushed out residents in favor of Airbnb apartments.

Flooding, though, is the existential danger.

Earlier this week, for only the fifth recorded time in St. Mark’s nine-century history, the water reached the marble floor inside, submerging the area around the altar of the Madonna Nicopeia.

On Wednesday, the floor was dry but a yellow sign reading “Attention: Wet Pavement” stood ready by the entrance. Outside, though, the water still filled St. Mark’s Square. As tourists climbed the steep steps to the basilica’s balcony (“We saw a wedding proposal!” one woman shouted), the Roman Catholic patriarch of Venice, Msgr. Francesco Moraglia, checked in on his church.

Earlier in the week, he had rushed to visit when he heard the water had breached the door.

“I said a prayer and gave a blessing,” Monsignor Moraglia said, showing pictures of himself wearing galoshes. Now, he said, he was hoping for help from the multibillion-dollar Mose project, an unfinished system of floodgates that was initiated more than a decade again to block the rising waters and threats from global warming.

He said he and the city’s leaders had a “mission to defend the basilica not just from the floods” of excessive tourists and the enormous cruise ships that brought them, but also from the threats brought on by climate change.

But the two make a formidable combination.

Outside the church, traffic and road rage were in full display on the raised wooden walkways. An American woman elbowed a group of Chinese tourists who sought to cut the line.

On Thursday, high tides brought the water back all across the city, flooding the narrow streets up to people’s ankles and shins. The thumping sound of rolling luggage was replaced by the sandpaper scratching of the yellow, orange and blue plastic bags that tourists bought to cover their shoes and ankles.

Some of the tourists seemed to be having fun, picking up crabs that had washed onto the sides of the canals or laughing as they carried their luggage over their heads.

Mr. Campostrini, the St. Mark’s board member who is working on new ways to keep the water out of the basilica, didn’t see the appeal.

“No one will miss it,” he said of the high water.

On Wednesday night, when the streets around the square temporarily dried out, the tides seemed to have momentarily washed away the invading hordes.

An American influence lingered, though, in the local children wearing Halloween costumes and bidding “dolcetto scherzetto” — treat or trick — to shopkeepers as their parents sipped beers and Aperol spritzes in the quiet Sestiere Santa Croce square.

Toto Bergamo Rossi, a noted restorer and director of the Venetian Heritage Foundation, called the rising waters “a tragedy” for the monuments he had dedicated his life to protecting.

With ancestors that include some of the most powerful figures in Venice’s history, Mr. Rossi said he now felt “powerless” in the face of the rising waters. He mourned the damage done to his restored garden, one of the city’s treasures and featured in Gabriele D’Annunzio’s “The Flame of Life.”

The city historically became rich from the salt trade, Mr. Rossi said, and now the salt had returned with a vengeance as “our big enemy.”

His house guest this week was his friend James Ivory, the acclaimed director of “A Room With a View,” and many other films, several of which were set in Italy. His love affair with Venice dated to his first film as a student in 1957, “Venice: Theme and Variations.”

As Mr. Ivory crossed a footbridge to a local trattoria, he talked about the charms of a city he had been returning to for more than 50 years.

At age 90, he said he couldn’t worry about everything, but this week’s flooding was the worst he had ever seen. The fate of Venice was one of the things worth agonizing about.