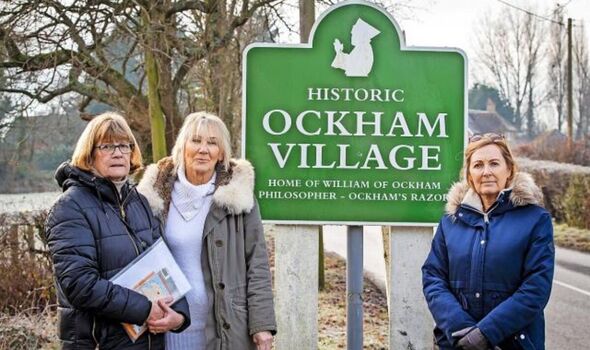 The TV host has joined residents in rural Ockham, Surrey, in campaigning against the development.

Housebuilder Taylor Wimpey’s project includes two schools and a medical centre, and could quadruple the local population from nearly 900 to almost 3,500.

Ockham’s narrow country roads will be jammed with an estimated 5,000 cars and local wildlife will suffer, campaigners said.

Wish You Were Here? star Ingrid, 68, spoke out days after the Daily Express highlighted the national countryside threat from a rush for new homes to end the housing crisis.

Campaigners nickname the schemes “cowpat developments” because they are dumped indiscriminately in green areas.

Ingrid said: “It will be a blot on the landscape, but this isn’t nimbyism. Every way you look at the argument it will resonate – the environment, nature, wildlife, the eco-system.

“We love it here. Everyone wants to get away from the maddening crowd of London. We’re losing all these open spaces. And once it’s gone, it’s gone forever.”

The ex-wife of Chris Tarrant added: “It’s not practical or proportionate. You are talking about 3,460 people invading an area that has got a small settlement of less than 900. It’s just disproportionate.

“A lot of these people will be urban-minded people that don’t understand or respect the countryside. Crime will go up without question in one of the safest places in the country.”

Her friend and fellow villager Helen Jefferies, 62, said: “The main objection is that this area is not sustainable. It’s about its impact on an infrastructure that doesn’t really exist. It’s as far as possible from the railway station, so you have to rely on the car. That means you will have 5,000 cars on roads which are narrow, unlit and prone to flooding. It just won’t work. The danger is it will become a ghetto in the middle of the countryside.”

Another campaigner, Frances Porter, 61, added: “We all like ­having nature in our backyard but this is going to become a cowpat ghetto.”

TV sports presenter Helen Chamberlain, 55, is another resident who is said to be opposed to the development.

The village, close to Guildford, dates back to the Bronze Age and boasts several historical buildings, including the Grade I-listed All Saints’ Church and the 19th century Ockham Mill. It was also the birthplace of medieval philosopher William of Ockham.

But the village’s rural idyll could be shattered by developers. Taylor Wimpey have submitted plans to build nearly 1,800 homes, while two smaller developers are expected to tender plans for a further 200.

The proposed building site was formerly Wisley airfield, a runway and landing strip which was built during the Second World War.

The developers claim the “sustainable settlement” is needed to help solve the housing crisis and will include a percentage of “affordable” homes.

They also say they will provide green space around the development, together with a drainage plan and a well-designed traffic management system.

But Ingrid said: “This plan was originally turned down by the Environment Secretary. The fact that it has been objected to at the highest level – forget us villagers – is important.

“It’s impractical. We know this better than anybody else because we live here and we know how it works and functions.”

Helen added: “When it was included in the local plan there were 60,000 objections. It is unheard of.”

Guildford Council said: “The application is still being considered by the council, where a number of consultation responses are still awaited.”

A spokesman for the developers said they were supporting the council by “delivering much-needed housing as part of a new sustainable community that will secure a lasting legacy for generations to come”.

The spokesman added: “It will turn around 70 acres of concrete runway into a vibrant community with increased biodiversity, schools, sports facilities, parks and new transport options.

“This will be one of our most environmentally friendly sites to date and will bring significant positive benefits to ­residents and the wider ­community, including permanent job creation and a forecast £100million contribution to the economy.”

Meghan Markle in UK: Is THIS the first place Meghan will go when back in UK?