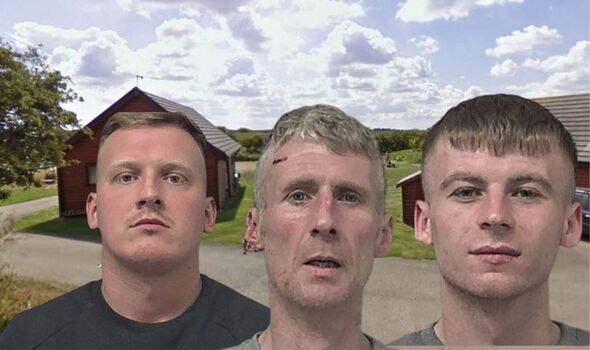 A court has heard how a young woman was badly injured after a car was deliberately driven straight towards her and her friend. The incident happened as part of a frightening revenge mission, whilst they were staying in a lodge at a country park.

According to HullLive, the ‘scheming mastermind’ behind the plan wanted to teach his ex-girlfriend a lesson after she dumped him and went off with another man because he had punched her seven weeks earlier. He recruited his car-owning former stepfather to confront the new couple at the country park but the grudge campaign went badly wrong when it was an innocent hairdresser who was hit by the careering car. She suffered a broken ankle during shocking scenes after 5am, Hull Crown Court heard.

The incident happened at Westfield Country Park in Fitling Lane, Fitling, between Burton Pidsea and Aldbrough, which has 30 “luxury” lodges, most with their own private outdoor hot tubs.

Shane Wynne also admitted dangerous driving and damaging a lodge and a wall at the park. Ness also admitted assaulting his ex-girlfriend on June 12.

Judge Mark Bury said that Ness had been in a relationship with a 21-year-old woman but, on June 12, they had been arguing before he went into her bedroom and punched her in the face, causing nasty swelling to her cheek and a bloodshot eye.

“It must have been some punch, that,” said Judge Bury. “She told you that the relationship was over but you wouldn’t leave it at that. You wanted to rekindle it by saying you were sorry but she wasn’t having any of it and dropped you. You found out that she was getting back with her previous boyfriend.

“That was entirely up to her. It was nothing to do with you any more. You were unhappy about it. It’s quite intolerable to treat your girlfriend like that. It’s hardly surprising that she didn’t want anything more to do with you. Why would she?”

Ness contacted his ex-girlfriend’s mother and told her in a reference to the new lover: “He’s dead”. The mother told her not to touch her daughter.

Ness found out that his ex-girlfriend and her new boyfriend were staying in a lodge at Westfield Country Park so he recruited his former stepfather, Shane Wynne, and his half-brother, Cameron Wynne, in a revenge plan.

Shane Wynne arrived at the country park in a car, with Cameron Wynne as his passenger, after 5am. Ness was not with them. The ex-girlfriend and her friends were staying in two cabins at the park.

The park is described in promotional material as being “situated in beautifully landscaped grounds amidst 37 acres of tranquil farmland”. The site also features lakes for coarse fishing.

Some of those there went outside to see what was happening and Shane Wynne reversed the car slightly before driving towards the group. Most of them managed to get out of the way but a 21-year-old woman – not the ex-girlfriend of Ness – was hit by the car and knocked to the ground. She suffered injuries including a fractured ankle and lacerations to her ankle and foot.

The woman, a hairdresser, needed surgery, including a plate and screws being put into her ankle. She continued to suffer pain and had to work reduced hours. She would need an operation in January and would be on crutches for three weeks, the court heard.

“Fortunately, although she was injured, this could have been a whole lot worse,” said Judge Bury. The car crashed into the doors of a lodge and a wall, causing damage that meant a complete refit was needed.

Shane Wynne drove off and the badly damaged car was recovered from near shops in Bilton Grange. All three men handed themselves in to police over the following days.

Ness was in breach of a two-year suspended prison sentence imposed on August 19, 2020 for wounding, involving a hammer attack on a man who suffered a fractured skull during an argument.

Shane Wynne had convictions for 108 previous offences, including two of dangerous driving and others of assault causing actual bodily harm, assault with intent to resist arrest, possessing an offensive weapon, threatening behaviour, theft, driving while disqualified and interfering with a vehicle.

Cameron Wynne had been sent to a young offenders’ institution for four years in February last year for kidnap and assault causing actual bodily harm.

That incident involved a 14-year-old boy, who was at a bus stop, being ordered to get into a car that Cameron Wynne was driving. The boy was driven to a secluded area, threatened with a Taser, hit, kicked and made to undress “in the middle of nowhere” before being left with no clothes on. The motive behind it was apparently over drugs, the court heard. Cameron Wynne also had convictions for violence and possessing an offensive weapon.

Steven Garth, mitigating, said that Ness, a scaffolder, regretted his involvement in the grievous bodily harm incident, although he was not there, and the injuries caused to the woman. There had been a good deal of arguing before he earlier lost his temper and struck out at his girlfriend.

“He is sorry for his offending and feels ashamed and rather foolish,” said Mr Garth. “He will get his head down for this sentence. He will serve his sentence without fuss and then, on his release, he is confident that he will find employment straight away and it is his aim to lead a sensible and productive life and stay out of trouble.”

Richard Thompson, representing Shane Wynne, said that the defendant became involved through “misguided loyalty” and because he was the one who had a car. “He should have put a stop to it and he accepts that he did not,” said Mr Thompson. The plan was “cobbled together” and it all happened very quickly. The car was used as a weapon.

Shane Wynne had suffered a drug problem and he had been attacked with golf clubs, with one of them used against him snapping in half over his head. He continued to suffer with a head injury and had suffered permanent damage to his eyesight.

Andrew Pickin, representing Cameron Wynne, said that the defendant involved himself in a “very traumatic and foolish” incident but he had expressed remorse and wanted to apologise.

“He has started to demonstrate change,” said Mr Pickin. “Even the staff in prison are surprised by his outlook now. They can’t believe he is the same man who was there only a year ago.”

Cameron Wynne had been recalled to custody after breaching his licence after the earlier kidnap sentence and he had tried to help other young inmates to learn from their mistakes. “He wants to help those young offenders, said Mr Pickin. “He is hoping to better himself and help others as well.”

Media calls on EU to crack down on online disinformation