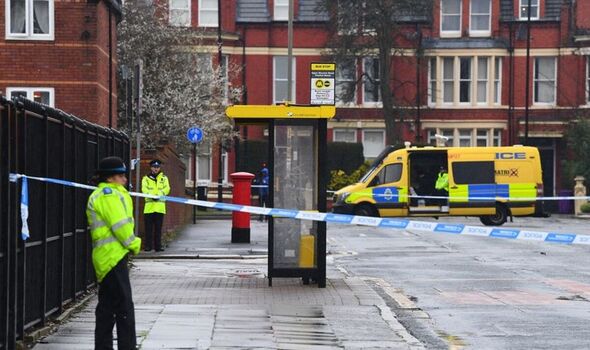 The family of the 15-year-old girl say they “didn’t recognise” the schoolgirl after she was shot in the neck on Upper Warwick Street in Toxteth, Liverpool. A statement read on behalf of her grandmother in court described her as a “shy and beautiful-natured girl”  but “ambition and peace were stolen from her” in the attack.

Rio Jones, 19, was jailed for life with a minimum of 16-and-a-half years at Liverpool Crown Court on Tuesday for his role in the shooting.

He was convicted of inflicting grievous bodily harm and attempting to murder rival gang member Shakur Watson after chasing him on an electric bike and opening fire.

The 15-year-old girl had been waiting for the bus home from school with a friend when she was caught in the crossfire.

The shot to her neck caused lung damage and damaged her vertebrae.

The statement read in court described the pain the schoolgirl was left in saying it was “impossible” for her family to be grateful she was alive when she was in “agonising physical pain” leaving her “unable to speak”.

It said: “The hours turned to days and the days to weeks, followed by long months of watching her suffer.

“She was on so many pain-managing drugs that she spent much of the day asleep, unable to engage in conversation because she was unable to speak. The damage to her lungs seemed to take away the power of her breath to talk.

“She was frustrated and isolated, became invisible almost, and we worried that we would never get her back. We would wake in the night to find her in the bathroom, crying in excruciating pain, running cold water on her arm to try and numb the pain that the medication would not take away.”

The statement written by her grandma said the teenager’s pain “follows her about in her daily life” as she is unable to speak about the incident and plagued by “night terrors and nightmares”.

It added: “Each night, men with guns come to shoot her in the back. She has had only two nights of uninterrupted sleep since the shooting happened.

“If she hears a bang, noise or a clap she experiences a flashback and collapses into a crumbling heap, shaking and crying uncontrollably. I’ve had to go to school several times to pick her up after being triggered by an innocent event, too distraught to remain there – her quiet dignity taken from her as she publicly reacts to the terrors of her memory.

“She is triggered by both sounds and visual images. Bus stops are now potential places of death where she feels targeted.

“We are unable to watch movies that contain guns, weapons, men hiding their faces, men on bikes or any sort of violent sequences. We’re unable to mention the incident in front of her or she removes herself from the room.

“She is afraid to go out alone, and we have to arrange chaperones for every outing she has. Her social life has ended along with her independence – I can honestly, truly say that there isn’t one aspect of her life that is untouched.”

The 15-year-old was rushed to hospital following the shooting on March 1 last year after a woman came to her aid.

The court heard that she told the woman she “didn’t want to make a fuss” as she asked for her mum.

The judge said the incident was evidence of gang-related violence and that the shooting was a “planned and determined effort to kill a rival” and that there “must be a deterrent element to his sentence.”

Jones was later arrested at his home with a search revealing he had body armour in his bedroom.

The gun and bike used in the attack have not been recovered along with the clothes Jones was wearing.