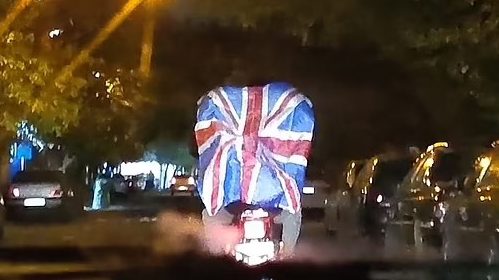 Iranian football fans have continued their protests against the country’s regime by celebrating their side’s thrashing by England.

Online footage showed fans – with their faces blurred – dancing in celebration as England’s 6-2 win was confirmed, while one man was seen riding a moped bearing a Union Flag through the streets of Tehran.

A person filming the scene said: ‘People are happy because of England’s victory.’

Iran’s state broadcaster censored footage of its footballers staying silent in protest while the national anthem was played.

It was booed by Iranian supporters in the Khalifa International Stadium, with many brandishing banners supporting women’s rights – including one saying: ‘Women, life, freedom.’

The messages came in support of ongoing protests, sparked by the death of Mahsa Amini, 22, in the custody of Iran’s morality police after she allegedly did not adhere to the country’s strict Islamic dress code for women.

More than 400 civilians are thought to have been killed since protests began in late September, with many more injured and arrested.

Catherine Perez-Shakdam, a specialist in Iran at the Henry Jackson Society, said the footballers’ decision not to sing the Islamic Republic’s national anthem would be one ‘the players will pay for dearly’.