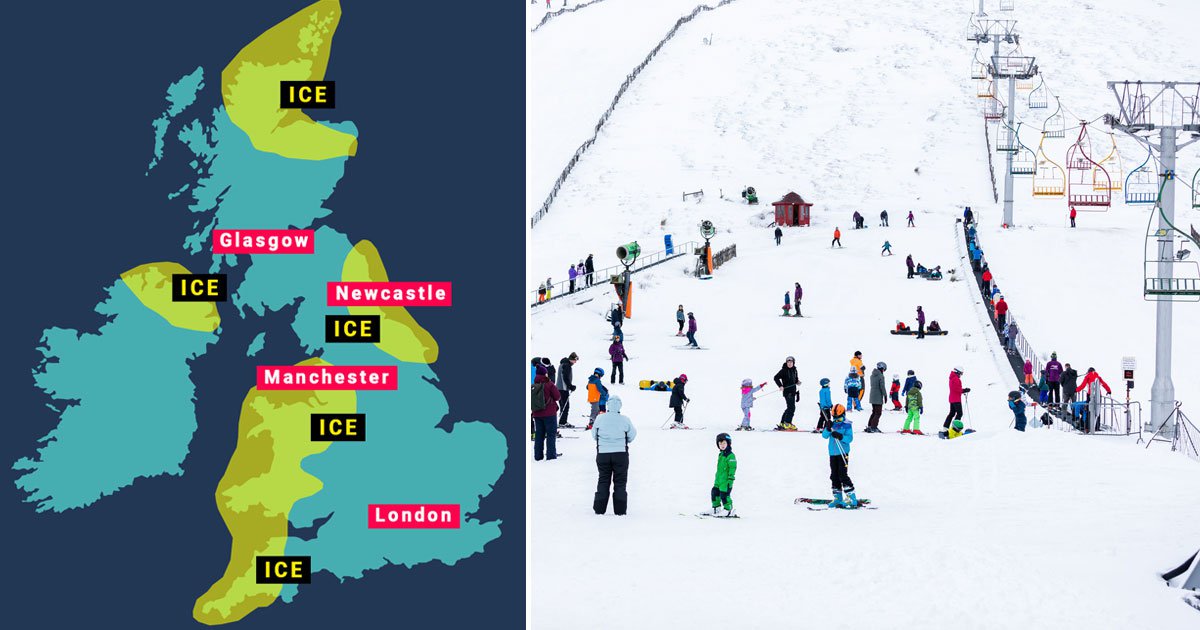 More travel chaos is expected today after the Met Office has issued new weather warnings across the UK.

Yellow warnings for ice are in place until 10am today in parts of Scotland, Wales, Northern Ireland, north-east England and south-west England.

The forecaster warned there will be ‘challenging travelling conditions on Thursday night and Friday morning’, which may include injuries from slips and falls and the risk of icy patches on untreated roads.

Scotland has seen the most snow and ice in recent days, with the Highlands area reporting 14 inches (36cm) of snow.

Both the Cairngorm Mountain Resort and The Lecht Ski Centre in the area were forced to close after snow drifts blocked the roads.

The Lecht, which is Scotland’s third largest ski centre, posted on social media: ‘All runs have new snow but it’s drifting in the strong winds. Access roads are closed.

‘Ploughs are battling 6ft drifts so it’s going to take a lot of work to get them cleared. Next update tomorrow 9am.’

Temperatures in Drumnadrochit, near Inverness, dropped to -10.4ºC in the early hours of Thursday, making it the coldest recorded temperature of the year so far.

Scotland also recorded the biggest snowfall of the year on Wednesday in the Highlands area.

Some 122 schools and nurseries were closed or partially closed, with 9,062 pupils affected.

Traffic Scotland warned of icy roads in some areas today and encouraged drivers and pedestrians to take care if they absolutely need to travel.

Yesterday morning Manchester Airport was forced to close both its runways due to heavy snowfall.

The airport said ‘operations will resume at the earliest opportunity’ and urged passengers to ‘contact their airline for the most up-to-date flight information’.

Tracking website FlightRadar24 noted at least 36 flights were delayed, and two were cancelled. Full operations were resumed by 9am.

A major incident was declared on Tuesday after a bus overturned while taking workers to a nuclear power station in Somerset.

Dozens were injured and had to be taken to hospital or minor injuries units.

A level three cold weather alert, issued by the UK Health Security Agency, is in place until 9am today and warns conditions ‘could increase the health risks to vulnerable patients and disrupt the delivery of services’.

The Met Office said today will be ‘mostly dry with plenty of sunshine after a cold and frosty start’.

‘A few showers affecting northern Scotland and North Sea coasts of England, whilst the far southwest turns cloudier for a time. Breezy in the east, else light winds,’ it added.

‘Most parts clear tonight, especially across England and Wales where a sharp frost and some freezing fog patches will form.

‘The far North West turning cloudy and windy with some rain later.’

Daytime temperatures are expected to increase to 7ºC or 10ºC across much of the country later today, with calmer weather conditions over the weekend.

Who’s on strike today and how will it affect you? Daily update for January 19

Contaminated blood scandal: Fury as victims NOT listed as ‘vulnerable’ during coronavirus