During a therapy session when I was 36 years old, I suddenly began crying as I saw – and felt – the scene of a distressed toddler being led by the arm in a hurry through a busy place. She was saying goodbye to her father.

I immediately realised this must have been the day my mother, baby brother and I left Lebanon.

The details aren’t something that had ever been discussed in the family, though I knew we left Beirut on a plane when I was two and a half years old and my dad hadn’t come with us.

It gave me cause to reflect on what it must have been like for an albeit astute toddler to have experienced something beyond her full comprehension – fleeing her home country and moving to the UK.

I’m grateful to my parents for the sacrifices they made to ensure our family’s safety. Yet the experience, for me, must have been one of utter confusion – and would have felt anything but safe.

It’s only been in the last few years that I’ve truly come to embrace my immigrant identity – something I didn’t really think impacted my life too much, until now.

I have no conscious memories of living in Lebanon. I wasn’t even three years old when we left. All I have are photos and the stories from my parents, aunts and uncle – like helping look after the plants, playing with the new arrivals when chicks hatched or going for walks through the village to visit family and friends. 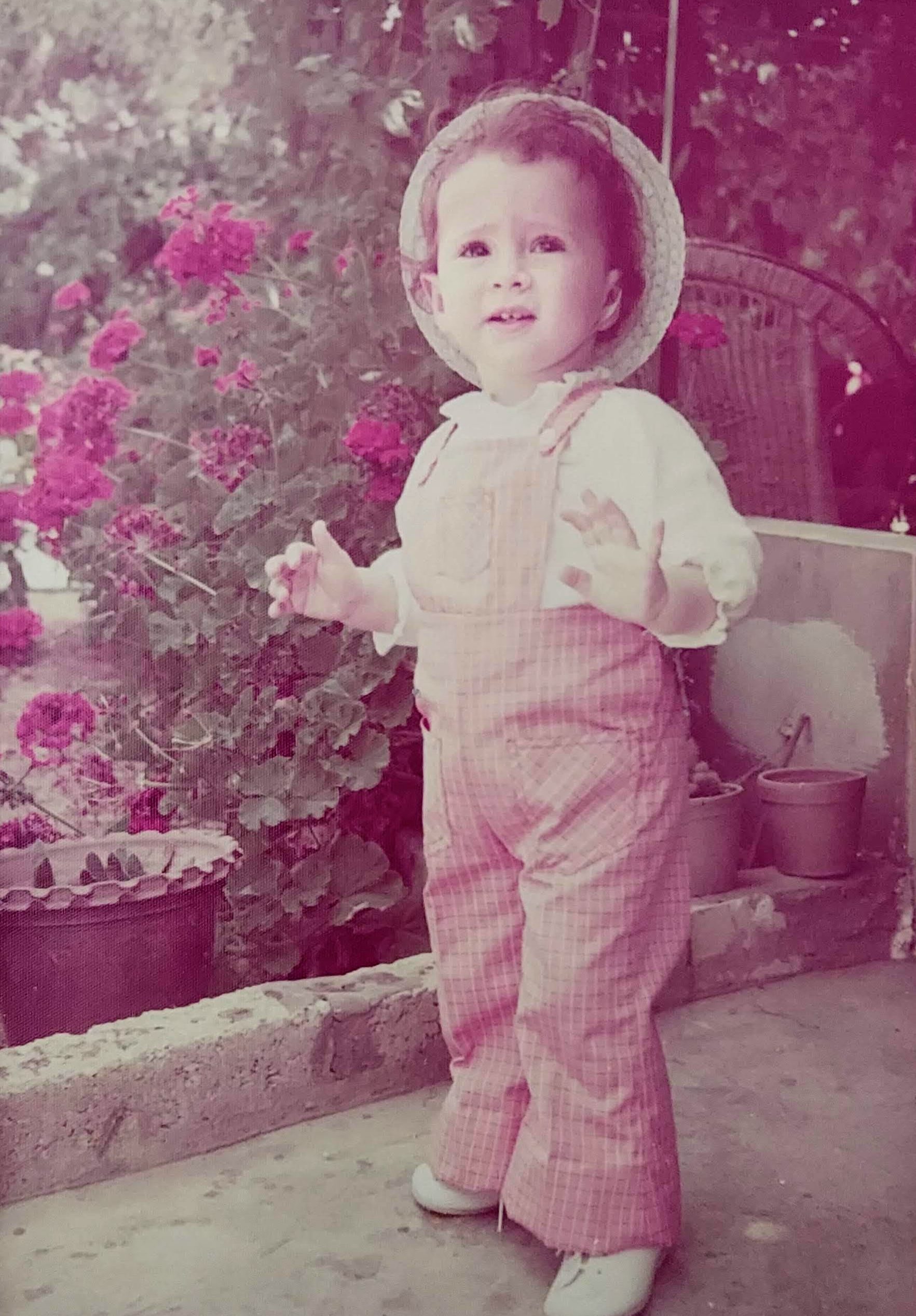 It was in February 1976, the Lebanese Civil War was escalating and my uncle was able to arrange for my mum, baby brother and I to leave on a plane to the UK because my mum is British.

The journey to the airport was dangerous as many blockades had been set up by the military throughout the city and different zones were controlled by different factions. Any travel through the city was dangerous.

My dad stayed to pack up the house and put things in storage. He was supposed to come on a flight the following week. However, the plane I’d been on turned out to be the last flight out of Beirut. I believe the airport was shut down as the war escalated.

He later found passage on a cargo boat to Cyprus in April 1976 and flew on from there, arriving in London to Hillingdon – my grannie’s house (mum’s mum) – six weeks after us with no contact in the intervening time.

I’m told by my mum that in the early months after our arrival, I would hide under the bed whenever I heard military planes coming into RAF Uxbridge. Of course life would’ve looked, smelled, and sounded so different – the only familiar things being my family. We came with one suitcase and very few belongings.

We lived with my grannie for just over 18 months and moved to Northolt in 1977, right before my sister was born. I’d started school in Hillingdon but had to leave once we moved.

I moved schools three times before I was eight years old because it took a while to get into the school my parent’s wanted me to attend so I went to the closest one until a space was available. After that, everything stabilised and growing up was happy and fairly straightforward.

I was speaking two languages from eight months old and had been a chatty little girl from then. I’d been used to speaking Arabic with everyone except my mum – with whom I spoke English. But when people in London were unable to understand me because I was speaking to them in Arabic, I refused to speak at all.

The advice from a speech therapist was to focus on English until I started school. As the language at home was English, my Arabic was ‘lost’.

I’ve always felt half-Lebanese but I don’t recall being aware of being an immigrant until I was in my late 30s. We lived in multicultural West London so I was surrounded by people with links to places all over the world – even though most of those my age had been born in the UK.

It hasn’t been until more recently that images and stories of people fleeing their homes have brought up an acceptance that this is my story too.

I find this hard because I know just how lucky I was to have somewhere safe to come to (and before the situation became too harrowing). Plus, I have a deep sense of just how difficult it might be – especially for the children – to rebuild a sense of self after this experience.

We visited Lebanon once a year if it was safe to travel. At around nine years old, I remember it feeling very different to life in the UK – the crickets at night, oregano in the garden, small windy roads on the side of a mountain, and even the fact that multiple members of each family live on different floors of the same apartment building. But I didn’t connect this to the manner in which we left.

Whenever I went back, I didn’t feel like it was my home country – it felt temporary, like I was on holiday visiting family. I identified with being British as a child and now I don’t feel completely either.

It was on a trip when I was 18 that I first recalled feeling sad and uncomfortable hearing people speaking Arabic – a language I knew I’d once understood. I recognised on some level that I had lost a part of myself for having moved.

I was unable to be part of the conversations and by then I understood that if we had stayed I would have been able. Plus, I felt like an outsider and yet this was where I was from.

Embracing my immigrant and refugee identity has been an evolving process. When I’ve been working through a personal issue – like redefining my career or grieving a loss – or during my various training as a holistic therapist, I’ve come to reflect on the impacts of our sudden move.

For example, I’m aware that I’ve had a tendency to sweep things under the carpet over the years or been slow to address things that have deserved attention. I attribute this to a misunderstood learning that life will be easier if you ‘bury’ difficult things and carry on as if nothing has happened.

The more I understand myself, the more I’ve been able to own all aspects of my history.

The number of people looking for safety away from their homeland is such a current and heartbreaking issue. With this increased attention, it feels important to acknowledge my place in the roll-call of those who’ve found sanctuary in the UK – not least as I feel it might go some way to helping those with judgemental views.

Since embracing this part of my story, I’ve realised my desire to support others approaching major milestones in their lives comes from not having my own transitional times fully honoured.

My initial move from Lebanon to the UK was sudden, not fully understood and not acknowledged much afterwards. I have learned that in order to grieve a loss or adjust to a major change, we need to talk about things openly – even if it is painful to do so.

I work as a milestone mentor and celebrant helping people acknowledge the big changes in their lives. I’m also an accredited facilitator with Rites for Girls to help girls transition into and through puberty.

And now I’ve just embarked on a PhD with The Centre for Educational and Life Transitions at Dundee University to understand more about what value marking our milestones might have on our lived experience.

Today, I call myself an immigrant.

I would love to re-learn my native language but as I reflect on that now, I hold a fair degree of apprehension about this as my childhood experience of not being understood when speaking Arabic still holds deep wounds that need to be addressed first.

The message to other immigrants is to take ownership of your story a little piece at a time and give yourself permission to explore what you have been able to learn through your challenges.

For me, this has meant finding a way to help others who are experiencing great periods of change.

As told to Minreet Kaur.

Mum, 42, died after swallowing bag of cocaine in airport lounge