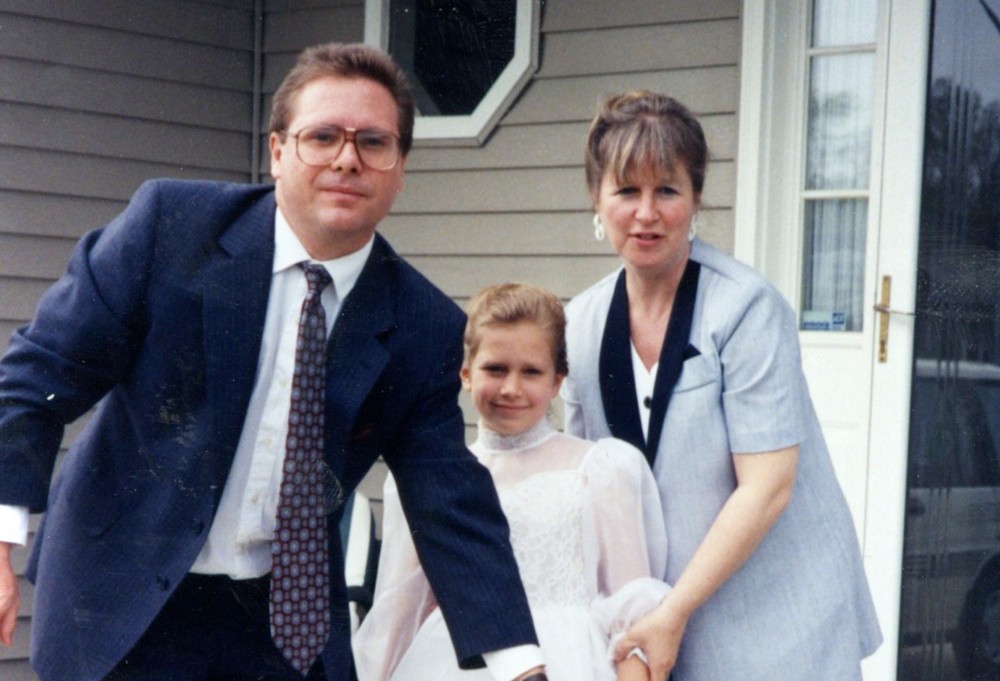 Although it’s been 20 years, I can still remember every detail of what happened on 11 September 2001.

I was 15 and a sophomore in high school when an announcement was made during geometry class that a plane had crashed into the North Tower of the World Trade Center. A girl in front of me burst into tears.

But despite knowing my dad worked on the 104th floor of the South Tower, I wasn’t concerned as I was too busy consoling my classmate, who I accompanied down to the guidance counsellor’s office. It was there that I was told that my mum’s parents were on their way to pick up me and my sister Jessica, now 26, and brother Matthew, 24, and take us home.

The rest of the day was a whirlwind.

While I was allowed to watch the events unfold live on TV, my siblings – then aged six and four – were kept distracted in the other room. I helped my mum, ringing hospitals to check if my dad was there, and taking a string of calls from friends asking if we’d heard anything. It was emotionally exhausting.

Mobile phone service was down, but I recall my dad having been able to get through to his mother. ‘I’m OK,’ he’d said. ‘They’re telling us to stay where we are.’ It was the last time we ever heard from him. But as I watched the South Tower collapse at 9:59am, I was convinced in my heart that he was safe.

The next day my mum and I drove to the city, parked the car, and had to walk many blocks before we got anywhere near Ground Zero. It was surreal.

Not only was it eerily quiet, but I’ll never forget the ash around my ankles. That’s when I realised it was all that was left of the Twin Towers and that I was essentially standing in one huge graveyard.

People had hung hundreds of flyers with photos of their missing loved ones. Wanting to be strong, I pushed my sinking feeling aside as we ran from one Red Cross tent to the other in search of signs that my father was still alive.

A week on, my mum decided to sit us down and explain that our dad wasn’t coming home. I was devastated. But as the eldest, and in the ensuing weeks and months, I felt I needed to take on the role of the second parent and act as caregiver for everyone to make sure they were all right.

My mum threw herself into work, taking early retirement from her job as vice principal of a school to support a congressman. And while my sister became withdrawn, my brother would spend hours playing with Legos, building towers and smashing them.

A beautiful memorial mass was held for my dad on 1 December 2001, but that he had died didn’t hit me until much later while attending a funeral for a friend’s father. I broke down and couldn’t stop crying. My grief had finally caught up with me and those tears I shed were for him.

It was a long time – maybe six months – before my father’s death was confirmed when a police officer came to our house in Howell, New Jersey, to inform us that his remains in the form of his teeth had been identified.

As I grew older, I still had overwhelming feelings of loss, especially around the 9/11 anniversaries. So while my sister found support through counselling with Tuesday’s Children, a nonprofit dedicated to helping the families of 9/11 victims, I decided at the age of 20 to seek therapy.

With the help of a professional, I learnt how lucky I was to have had my father for as long as I had, but also to appreciate the values he’d instilled in me.

He was such a funny, kind and compassionate man and it’s because of him that at Christmas every year I work with charities, filling shoe boxes with toys to send to those in need.

Some of the fondest memories I have of him include camping trips to the Poconos where, aged nine, I caught my first fish, which he helped me to reel in.

We laughed a lot because I didn’t want to touch it before he threw it back into the lake unharmed. Like him, I could never hurt an animal.

He’d always remind me to be gentle with our old golden retriever, Kelsey, and when I’d bring home turtles or goldfish, he’d help me to take care of them.

When I was 12, we visited SeaWorld and my father cheered me on as I took part in a dolphin swim. Today, I’m a marine mammal behaviour specialist at the Dolphin Research Center in Grassy Key, Florida.

One of the things we do is help veterans – some of whom went to Afghanistan to fight because of 9/11 – to manage their PTSD through dolphin therapy. It’s incredibly rewarding and I feel that with my work I’ve come full circle.

He would’ve been so proud that I not only followed my passion, but that I’m giving back to society in some way.

To mark the 20 year anniversary, I will be at the memorial in New York to read aloud a list of names – including my father’s – something I did together with my sister in 2003.

I am a mixture of emotions: while I feel honoured to have the opportunity to get up there and represent those men and women who perished that day, I feel such immense sadness that they are no longer with us.