Home » Europe » ‘It was a shooting range’: Ukraine’s deadliest day 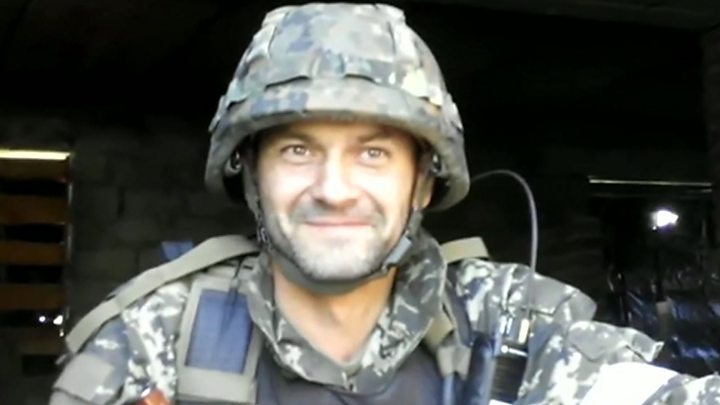 It was the biggest loss of life in Ukraine’s war against Russian-backed separatists.

Hundreds of soldiers died as the Ukrainian army and volunteers retreated in a column from the eastern town of Ilovaisk on 29 August 2014.

Ukrainian veterans are adamant the Russian army was there, even though Moscow has always denied claims that regular Russian forces took part in the battle.

President Vladimir Putin has said merely that any Russians involved were volunteers following “a call of the heart”.

How the battle was lost

At first it seemed like any other operation against Russian-backed separatists, says Roman Zinenko, 45, a former soldier who served in the Dnipro-1 volunteer police battalion that fought in the battle of Ilovaisk.

The Ukrainian army had surrounded the town and their battalion had been ordered to “wipe out” the Russian-backed force.

But on 24 August, Ukraine’s independence day, they began receiving calls from relatives.

“We did not feel that, because the [Ukrainian] army held positions around the city,” he told the BBC. “On August 24, we even captured the enemy’s fortified area.”

But the next day, heavy mortar shelling began and the school they were using as a base was raided.

“We realised the enemy had reinforcements,” he says.

“At the time we could not imagine the scale of this entrapment. Our troops had surrounded Ilovaisk but all our troops were surrounded by the enemy”.

Negotiations were going on and a humanitarian corridor was being prepared for them to leave, they were told, and yet their withdrawal was repeatedly postponed.

Then, on the morning of 29 August 2014, came the command to gather and leave Ilovaisk in two columns.

They began to move, they passed the first ring of encirclement smoothly but within a few kilometres their column came under fire.

“It was just a shooting range and we were the targets,” he said.

Roman and his fellow soldiers had set out in a security van because of a lack of equipment. But its wheels and motor were shot up so they switched to a light-armoured vehicle and kept going under constant fire.

Behind them, an infantry fighting vehicle carrying more than 10 soldiers was hit by a shell.

Bodies were thrown everywhere by the force of the blast.

“I can still see it. This body flying high, turning in the air and ending up hanging from a power line.”

They drove on a few more kilometres until their vehicle was disabled.

He escaped unharmed but his commander, Denys Tomilovych, was hit in the head by a 30mm automatic cannon shell.

“Another fighter sat next to him, he was injured too,” said Roman Zinenko. “When Den was hit in the head, fragments of his helmet and skull just cut his forearm.”

Roman and his comrades managed to survive and escaped the encirclement two days later.

According to official Ukrainian data, 366 Ukrainian soldiers were killed in the Ilovaisk battle.

The true figure may be at least 400, when you include soldiers registered missing or unidentified by their relatives.

How the conflict began

Did the Russian army get involved?

The Ukrainian general staff blames the heavy loss of life on an “invasion” by the Russian army. A government report also cited poor military preparedness and mistakes by senior commanders.

While many also died on the pro-Russian side, Kiev insists the separatists simply did not have the capability to win the battle.

Russia puts it down to a “counterattack” by rebel forces of the self-proclaimed “Donetsk People’s Republic”.

It denies direct armed support of the separatists and says only Russian “volunteers” who were not associated with the regular army fought in Ukraine’s Donbas region.

The separatists were using Soviet-era arms and military equipment captured from Ukrainian soldiers, and not modern Russian weaponry, Moscow insists.

It has made these arguments ever since the conflict began.

Was a Russian tank in the battle?

“We did not encounter Russian soldiers in Ilovaisk itself,” Roman Zinenko accepts.

“But the (Ukrainian) fighters who held positions around Ilovaisk and held back tank attacks seized a Russian T-72B3 tank that could only belong to the Russian army.”

This is the same tank the research group Forensic Architecture has investigated as part of a case being taken by Ukrainian volunteers against Russia to the European Court of Human Rights.

In August 2014, the tank was filmed by Ukraine’s Espresso TV channel, but it was later recaptured by pro-Russian forces.

Roman Zinenko says he also saw Russian military equipment in the first line of the encirclement.

“There were modifications of multi-purpose armoured light vehicles which the Ukrainian army doesn’t have. We use Soviet-era machines and these [Russian ones] are more modern. They look different.”

Who were the Russians near Ilovaisk?

The BBC also spoke to another Ukrainian military veteran, Vadym Yakushenko, 40, who was at one of the checkpoints near Ilovaisk and captured by what he insists was the “regular Russian army”.

He says he also saw new Russian military equipment with markers in the form of white circles and erased numbers.

“There was a guy named Vanya from Kostroma who openly said he was from the 76th Pskov Airborne Division of the Russian Army,” Mr Yakushenko insists.

“He complained that we had spoiled his vacation. He had recently got married and was planning a honeymoon but was summoned from his division and sent by train to [the Russian border town] Rostov and then ended up in Ukraine.”

Five years on, the battle of Ilovaisk continues to overshadow the lives of the two veterans.

Vadym Yakushenko is head of a museum dedicated to the conflict, while Roman Zinenko has written two books on the battle.

“Part of my soul is still there,” says Roman.

BREXIT WARNING: No deal to leave Ireland on brink of recession and cost 100,000 jobs

Manchester Tier 3: Why is Manchester still in Tier 3? Did cases go down?