Home » Europe » Italy closed its ports to NGOs, but boats keep on arriving

New arrivals are not deterred by Italy’s coronavirus lockdown; if weather conditions are good, they take their chances. 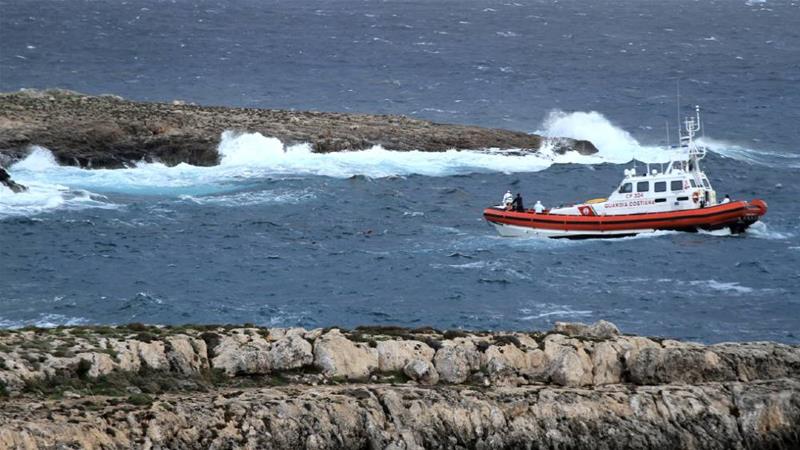 Rome, Italy – Around 180 migrants remain stranded off the coast of Italy after the government closed its ports as a safety measure against coronavirus infections.

“We cannot stop migrants: if they set sail, it means that they have to dock somewhere,” Salvatore Martello, mayor of the island of Lampedusa, told Al Jazeera.

After a lull in the arrival of boats from Africa at the end of 2019, numbers started to pick up again in the first two months of the year – only to plunge in March as Italy suffered from its coronavirus outbreak.

But the trend could yet reverse again. According to the International Organization for Migration (IOM), at least six boats have departed from Libya since the beginning of April, carrying roughly 500 people, among them 150 later rescued by the German nongovernmental organisation vessel Alan Kurdi.

An order signed on Tuesday by several Italian ministers established that, for the duration of the national health emergency sparked by coronavirus, domestic ports could no longer be considered a “place of safety”.

Even though international rescue vessels such as the Alan Kurdi are kept offshore by this new measure, small ships setting sail from Libya and Tunisia have continued to arrive on the Italian coastline.

Three wooden boats, carrying 34, 67 and 57 asylum seekers, each disembarked on Lampedusa this week.

“Arrivals are not decided by controls in the open sea or on African shores, but simply by the good weather,” Martello said. “And forecasts until Saturday are good,” he added.

Lampedusa is Italy’s southernmost island, closer to Tunisia than to Sicily.

For those migrants risking their lives crossing the Mediterranean, these shores represented a safe harbour and the main door to Europe.

But the coronavirus outbreak is making their reception harder.

“The island does not have the capability of receiving migrants in the long run in full compliance with the health protocols required by the COVID-19 emergency,” Claudia Vitali, a humanitarian worker for Mediterranean Hope, the reception programme run by the Federation of Evangelical Churches in Italy, told Al Jazeera.

Italy requires any passengers disembarking to undergo a two-week quarantine.

In Lampedusa, recently arrived refugees have no place to go but the local reception centre. It can host only 96 people in “normal” times.

After social distancing became a requirement for every public facility, there is even less room available.

When the first 34 refugees docked on Monday, they were welcomed into the centre.

But the next arrivals had to wait the whole night in the harbour. Half were subsequently let into the centre, while the others were transferred to the mainland on a regular ferry line.

Italy’s death toll from the virus rose to 18,279 as of Thursday.

With only 115 infections, the province of Agrigento, which includes Lampedusa, remained relatively safe from the spread of the disease.

The only citizen found positive on the island was a woman who travelled back from Bergamo, one of the worst-affected areas in the north of the mainland.

But after a month of lockdown, tensions are running high. While the newly arrived refugees waited to be transferred, a group of 60 people held a demonstration in front of the town hall.

Martello says the protest arose after three African men walked out of the reception centre for a stroll. Some citizens get upset at the sight of newcomers not abiding by the rules.

Martello understands their concerns, and he gives almost daily updates about any possible new infection. He also enacted a forced 14-day quarantine period for anybody coming to the island.

But he fears that new arrivals could inflame tensions further.

Since there is no more room to receive asylum seekers, he launched an appeal to the Ministry of the Interior and asked for a “welcoming boat” to be permanently docked in the harbour.

“There are health rules that must be abided by to protect our individual and collective safety, and these must be applied to everyone, migrants included,” he said.

Mediterranean Hope has been monitoring the conditions of asylum seekers on the island since the aftermath of the October 2013 migrant shipwreck, when 360 people are believed to have lost their lives by drowning.

Vitali has been living on the island for 10 months, and agrees that preserving the health both of migrants and citizens represents the main priority for every organisation here. In her opinion, Lampedusa would not cope with a health emergency such as the one wreaking havoc in northern Italy.

But she believes that closing the ports is not a solution, and said, “The coronavirus won’t stop those escaping from violence and prosecution.”