ROME — At a police convention in October, Matteo Salvini, the most powerful figure in Italy’s populist government, ran his hands over an enormous military-grade sniper rifle and posed with a submachine gun. Before elections this year, he campaigned at a gun show and signed a cooperation pledge with a group advocating looser gun laws in Italy.

Italian culture, linked in the popular imagination with fine art, fashion and good food, does not typically conjure up the image of assault weapons. But in September, the government loosened gun laws, making it possible to own more guns like the AR-15, an assault rifle that has been used in numerous mass shootings in the United States, most recently a Pennsylvania synagogue where 11 were killed.

Opponents of Mr. Salvini wonder why he would want to import the freewheeling gun culture so associated with the United States, which is far and away the developed world’s leader in mass shootings and other gun-related violence. The easy answer seems to be politics.

As interior minister and deputy prime minister, Mr. Salvini is changing many things, working from a populist playbook. He has cracked down on immigration, declared a war on drugs and spread the sense of a public safety emergency, even though crime in Italy has been dropping for years.

Depending on whom you ask, Mr. Salvini is either making Italy safer or purposefully stoking fears at a time when voters across Europe are looking to strongmen.

Italy does not have a gun lobby anywhere near as powerful as the National Rifle Association in the United States. But Mr. Salvini is in the process of creating his own following as he promotes himself as a law and order tough guy.

The looser gun laws are only part of the picture as Mr. Salvini tethers immigration to security issues, even loading his “Security Decree,” passed Wednesday in the Italian Senate, with tough measures against migrants.

Among other things, the decree, he says, would make Italians safer by making it easier to deport migrants, severely restricting their pathways to legal status and closing centers focused on integration. The measure, which the lower house of Parliament will vote on later in the month, would also give Taser guns to more police.

Critics argue that the new decree will only increase crime by pushing migrants out of the system and into the shadows. But Mr. Salvini has rejected that notion, as he has rejected that he is arming Italy up, saying he just wants to give good guys a chance to defend themselves. 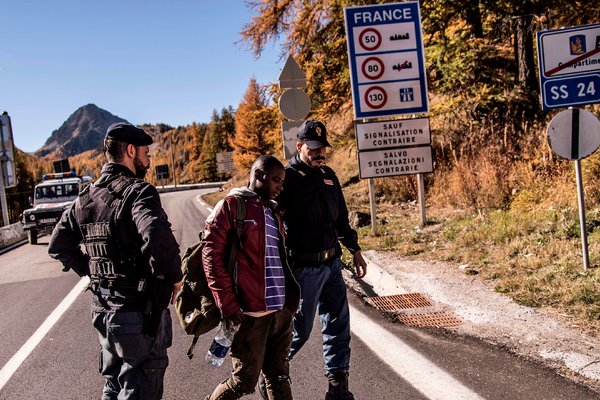 And he is apparently persuading more civilians that is a good idea. In a recent survey, 39 percent of Italians said they were in favor of making it easier to get a gun for self-defense — up from 26 percent in 2015.

Although there are no reliable statistics on gun ownership, a recent study estimated that 4.5 million Italians (out of a population of approximately 60 million) live in a home with a firearm.

And the number of sport shooting licenses — the license of choice for ordinary citizens who want to keep a gun at home for self-defense — has skyrocketed from approximately 400,000 in 2014 to nearly 600,000 this year. (Italy’s assorted criminal mobs, who are heavily armed and run guns, do not bother with licenses.)

In a victory for Mr. Salvini, lawmakers in the Senate recently took an important step to make it easier for people who injure or kill intruders to claim their actions were “legitimate.”

The sentiment worries some. “Our opponents have taken possession of certain words, and they use them to exploit the fears of many citizens,” said Dario Nardella, the mayor of Florence and a member of Italy’s Democratic Party, at a recent convention for liberals. “Security,” he said, was the most abused of them.

“We’ve simplified the way to buy yourself a gun,’’ he added. ‘‘This is an idea of do-it-yourself security.”

Mr. Salvini said in a television appearance last year that he did not have a gun license and did not want one. But he and his party have been willing to publicly associate themselves with gun groups, an anomaly in a country where assault weapons carry a certain stigma.

Giulio Magnani is the president of Italy’s most active gun lobby, the Directive 477 Committee, named for a rule that serves as the basis of European Union gun regulation.

In a recent interview at his family home in an upscale neighborhood of Rome, Mr. Magnani showed off the original cooperation pledge signed by Mr. Salvini, which he keeps safe in a blue binder.

In the pledge, Mr. Salvini promised that he would work to loosen gun laws and that he would consult Mr. Magnani’s gun lobby on any future legislation.

Italian newspapers have compared Mr. Magnani’s group to the N.R.A. and called it a “super lobby.” But it didn’t look like it, as he stuffed envelopes with newsletters for his members. He has to work from home, where he lives with his parents, because, he said, the group could not afford a proper office.

“I will have to evaluate how I am spending my time,” Mr. Magnani, 32, said. He graduated from college shortly before he helped found the organization in 2015, and he said he was unpaid.

Nevertheless, he has seen some notable results.

In 2015, Italy’s previous government, led by the Democratic Party, put strict limits on how many military-style weapons licensed citizens could own. To get a gun license in Italy, citizens must submit to a background check and provide doctors’ notes certifying that they are in good mental health. Critics say those requirements, which have generally remained in place, are not enough.

The new law doubled the number of “sport” weapons that licensed citizens could own, a category that includes some semiautomatic weapons such as several models of the AR-15. It also loosened limits on magazine capacity. It was a lot of what Italy’s gun associations had hoped for.

The populist government’s move to increase the cap on semiautomatic weapons was a necessary concession to gun owners who legally purchased such weapons before 2015, when the previous government’s antiterrorism law came into effect, Mr. Magnani said.

Gun control advocates disputed that interpretation and said that the government was needlessly endangering public safety.

“I’m convinced there was already an agreement between these associations and the government, and particularly the Northern League,” said Giorgio Beretta, a researcher who tracks gun violence in Italy, referring to Mr. Salvini’s party by a previous name.

It is already too easy to get a weapon in Italy, said Mr. Beretta, who only coincidentally shares the name of a major Italian gun manufacturer.

There is no official data available on how many crimes in Italy are committed with registered, as opposed to illegal, firearms, but some high-profile attacks have made the news.

In February, a right-wing extremist named Luca Traini went on a shooting rampage in the town of Macerata, targeting migrants with a Glock handgun. It was later reported that Mr. Traini had a gun license for sport shooting.

The easing of gun control laws, and the efforts to expand the definition of self-defense, are alarming to Italians who see Mr. Salvini’s emphasis on security issues not as a step toward a safer country, but as a slippery slope toward a more dangerous place.

Francesco Minisci, the president of Italy’s national association of magistrates, said in an interview that the self-defense change was unnecessary and dangerous, and could lead indirectly to an increase in gun use.

Kate Middleton warning: Duchess and William may have ‘dangerous’ item at Kensington Palace

‘How happy is Harry?!’ Royal experts praise Duke’s appearance as he shows off ‘dad bod’