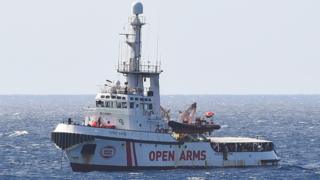 A row between Italy’s Interior Minister Matteo Salvini and fellow ministers has intensified over a Spanish charity ship anchored off southern Italy with 147 migrants on board.

In an open letter to Mr Salvini on Facebook, the prime minister named the countries as: France, Germany, Romania, Portugal, Spain and Luxembourg.

The migrants, rescued off the Libyan coast, have been stuck at sea for two weeks. The tiny isle of Lampedusa has long been a magnet for African migrants fleeing violence and poverty.

Mr Salvini hit back with his own open letter to Mr Conte, saying his “closed ports” policy was working.

“Without this firmness, the European Union would never have lifted a finger, leaving Italy and the Italians alone, as it did in the years of the [Matteo] Renzi and PD [Democratic Party] governments,” he wrote on Facebook.

The Spanish charity Proactiva Open Arms has been rescuing migrants in the Mediterranean since October 2015.

Mr Salvini is feuding with Five Star, the coalition partner of his right-wing League party. Last week Mr Salvini, who is also a deputy prime minister, announced that the alliance was over and Italy should hold fresh elections.

But anti-establishment Five Star and the opposition centre-left PD have stalled any debate on Mr Salvini’s no-confidence motion, throwing doubt on his ability to engineer a snap election.

Mr Salvini’s League is leading in the opinion polls, having overtaken Five Star, but a coalition between Five Star and the PD is looking increasingly possible.

Five Star and the League have been bickering for months over a range of issues, including taxation and the financing of a high-speed rail project, involving a tunnel through the Alps.

No jab no job – will the COVID vaccine policy cripple care and NHS?