LODI, Italy — At the beginning of the school year, as most of the elementary students chatted over warm plates of pasta in the cafeteria, about a dozen immigrant children unwrapped sandwiches around three tables in a spare classroom with slanted purple blinds, drab office furniture and a form reading, “Students who bring lunch from home.”

“I wanted to go back to the cafeteria,” said Khadiga Gomaa, a 10-year-old Egyptian girl.

Khadiga and the others did not belong to an Italian breakfast club of poorly behaved students. They were segregated from the rest of the pupils at Lodi’s Archinti school because they had lost their daily lunch subsidy.

And that was because they failed to meet a new, and critics say punitive, requirement introduced by the town’s mayor, a member of the governing and anti-immigrant League party.

In addition to the usual documentation needed for lunch and bus subsidies, the mayor now requires foreigners to prove that they do not possess property, bank accounts or other revenue streams in their countries of origin. 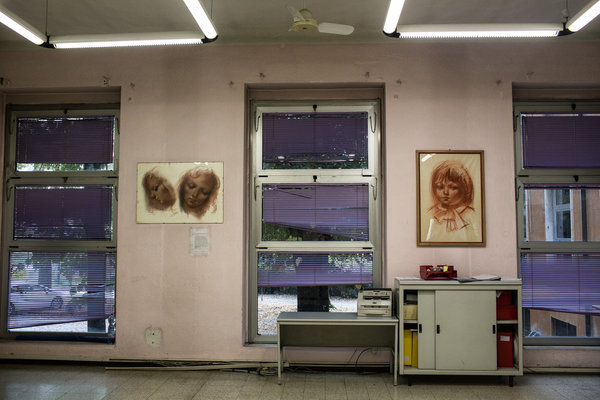 Without that proof, children cannot get subsidized lunch and instead have to pay five euros a day, which many parents say they cannot afford. But in Lodi’s schools, as in much of Italy, children cannot bring outside food into the cafeteria.

That meant students who hadn’t paid or received subsidies had to go home for lunch. To avoid burdening parents, the school’s principal allowed the children to bring sandwiches from home and eat them in a separate room.

Reports of segregation in Lodi — and the violation of the sacred Italian ritual of lunching together — struck an Italian heartstring.

After a national outcry, Italians raised 80,000 euros to pay for the lunches and school buses of about 200 immigrant children, many of them born and raised in Italy, through December. And many hailed the haul as a first sign of resistance to the League, and to Matteo Salvini, its national leader and Italy’s powerful vice premier, who has cracked down on immigration, hardened opposition to birthright citizenship and spoken harshly about migrants.

But here in Lodi, a town in the fertile Po River Valley, with a handsome piazza paved with cobbled gray river stones and adorned with a medieval cathedral and neoclassical facades, many locals took another view.

On Tuesday morning, as the committee that had raised money for the children held a rally in a small piazza directly under the mayor’s offices, Adriana Bonvicini, 60, bought gladioli in the piazza’s flower shop.

“They are exploiting their children and people’s feelings to get what they want,” she said, gesturing at the square, filled with women in hijabs and flowing African dresses.

“They are trying to cast us as heartless,” she continued. “They are the cruel ones. It’s a question of justice. They all have five kids each and want a free ride. Remember what Erdogan said.”

This was a reference to President Recep Tayyip Erdogan of Turkey, who has urged Turkish people living in Europe to “have not just three but five children.” She quoted him, loosely: “We will take over Europe through our women’s bellies.”

The women around Ms. Bonvicini agreed.

They argued that it wasn’t so hard for foreigners to get proof from their embassies and that foreigners took advantage of the town’s largess and then complained about it.

They sounded, in short, like the people who voted for the League in the town and all over the country.

“Let them govern,” Ms. Bonvicini said, referring to the government.

But Lodi mothers from Tunisia and Egypt said that they returned home to get the documents and that none existed. A mother from Nigeria said her husband went to the embassy in Rome and submitted the requisite documentation to the city, but had yet to hear back and was struggling to pay the full freight for her child.

The mayor, Sara Casanova, had the backing of Mr. Salvini (“SHE’S RIGHT!!!” he wrote on Twitter). On Tuesday she was nowhere to be seen.

She declined an interview request, but told La Verità, a newspaper preferred by the government, that she didn’t require the documentation from people from war-torn nations, and that “we’re not racist and there’s no apartheid here.”

On Tuesday, the committee’s organizers hung signs showing children with their noses pressed up against a cafeteria window.

Another sign showed a boy with his hands in the air saying: “Fascism is back. History didn’t teach you anything!!”

That sign was directed to Lodi’s mayor, whose door they knocked on every two hours with chants of “Open up.” But it could have been a message to the national government.

Tuesday was also the 75th anniversary of the deportation of Roman Jews to Nazi death camps, but the prime minister’s office wrote that it was the 80th anniversary, and the president of the country’s national broadcaster, who was chosen by Mr. Salvini, wrote of “the celebration of the 65th anniversary.”

Northern regions controlled by the League have also required immigrants to prove their financial status through the same bureaucratic requirement used in Lodi when trying to get low-cost public housing and subsidies to buy school textbooks. For the demonstrators in Lodi, the town, a famous battlefield for Napoleon, was now a front against the government’s creeping racism and resurgent fascism.

“I’m sorry for Italy if they think this is equality,” said Imen Mbarek, 30, who said she returned to Tunisia to get the right papers but that they simply didn’t exist. She is now paying full price for school lunch; last year, she said, she paid 1.65 euros a day.

Hayat Laoulaoi, 35, a Moroccan housewife with a blue headdress and pink cellphone cover, had four children, all but one born in Italy. She said she was unable to secure the required documentation or afford the full freight.

So she made her son Soufiane, 9, tuna sandwiches that he ate in the separate room.

She said that after losing the bus subsidy, she walked with him six kilometers to school and that when they saw a bus drive by on the street he asked, “‘There’s a school bus, why can’t we go on it?’”

As she spoke, her son played quietly with a Transformer toy and said he missed his friend Rayen, a Tunisian boy who still eats in the cafeteria.

The majority of the students in his school, as high as 80 percent according to school officials, are considered foreigners, even though many of them were born and raised in Italy.

Eugenio Merli, the principal of the Archinti school — which is named for Ettore Archinti, a former Lodi mayor sent by fascists to die in a Nazi concentration camp — defended his decision to put the children in a separate classroom to eat.

“Eating in the classroom created a type of separation, but it was a way to help the parents,” he said, adding that he worried that if the children were forced home for lunch, they might not come back.

This month, he strong-armed the cafeteria’s caterers into letting the students back into the cafeteria, where they ate their sandwiches at separate tables.

“The kids have a right to be with their friends, not to be segregated,” he said. “They aren’t just going to school to learn. They are also learning how to live together.”

Outside the school, he greeted Khadiga Gomaa, who was in high spirits. She said she had eaten her first hot lunch with her friends since school started.

Heartbreaking reason of riderless horse at front of Queen’s procession