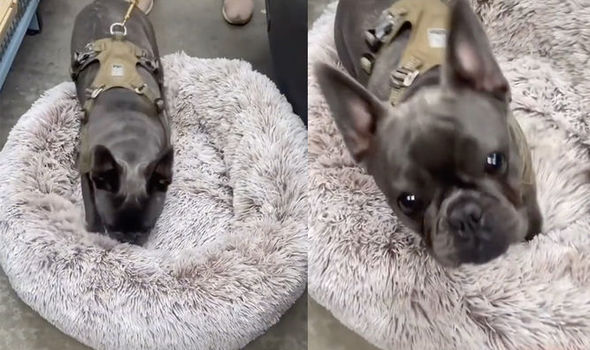 Belle the French bulldog shows that she knows how to stand her ground in this hilarious video, after deciding this doggy bed simply has to come home with her.

The clip, which comes from TikTok user @belle_frenchie, was a smash hit on the video-sharing platform, with almost one million views and over 50,000 likes.

The amusing series of events begins when Belle’s owner makes the fatal mistake of placing the grey bed on the ground for her to try out.

The bulldog instantly makes herself comfortable on the bed, clearly coming to the swift conclusion that she will not be leaving without it.

When Belle’s owner tries to put the expensive bed back in its place, he tells the dog to get out, but to no avail.

Belle digs her heels in and refuses to move off her new prized possession, biting into the fabric in order to hold on as her owner attempts to move her.

The clip clearly amused viewers, with one commenting: “She be like ‘nooo, we’re going home with this!’”

Another wrote: “You are coming home with me.”