Home » Europe » Jacob Rees-Mogg to TEAM UP with Nigel Farage to deliver Brexit – ‘Better you than Corbyn!’

Jacob Rees-Mogg praised Nigel Farage for his commitment to Brexit and welcomed the Brexit Party leader’s offer to help Britons see their demands met. The North East Somerset MP insisted Mr Farage could exploit the power his party secured with their victory at the European elections to pressure the European Union into understanding Britain’s position. Speaking on his weekly LBC show, Mr Rees-Mogg said: “Nigel, I think your help to this country in ensuring that we leave properly is very welcome.

“Your authority now in Brussels to explain to them what the situation is in the United Kingdom is enhanced by your election results.

“Of course, I want people who are in favour of Brexit to work together. I’m telling you I prefer that to trying to work with Jeremy Corbyn, which I thought was a daft idea.”

Mr Rees-Mogg was one of the most vocal opposers to Theresa May’s decision to seek a compromise with the Labour Party after she snatched a new delay to the Brexit deadline. The talks with the opposition collapsed after five weeks.

The chairman of the eurosceptic European Research Group (ERG) organisation also suggested Mr Farage could help the Government finalise preparations for a no deal Brexit scenario. 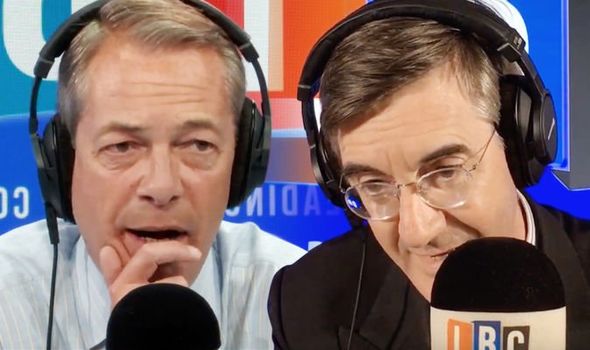 He continued: “I think the idea we can be ready on WTO terms and you have ideas on how to do that and particularly on what are we missing – almost everything is in place but if we leave without a deal there’s bound to be something that’s been forgotten.

“You coming up and saying, ‘look, you have missed this point. This needs to have a solution, this is something you’ve got to do,’ is invaluable.

“And you should want to do it because you are a patriotic Briton and I’m sure you will.”

The Brexit Party leader thanked Mr Rees-Mogg for his response to his “genuine offer to help” and urged him to pass on his proposal to the British Government.

“I’m saying we’ve got the team that can go in and get this ready. This has nothing to do with party politics 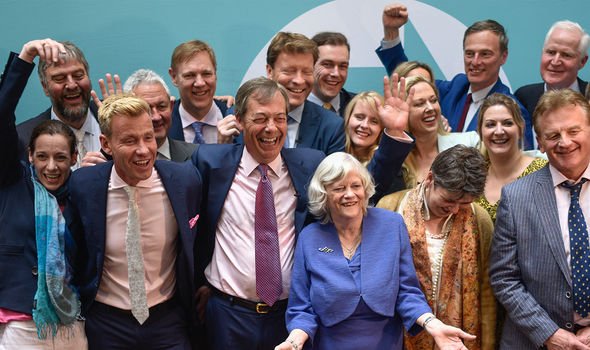 “This is about making sure our country is ready at the end of October to leave this ghastly European Union and I want you to say, ‘yes, Nigel, we want your help’.”

Nigel Farage’s Brexit Party last week swiped the board at the European elections, winning 30.8 percent of the vote and pushing the mainstream Conservative and Labour Parties down the line.

But despite his success at the poll, Mr Farage may yet again be kept from officially promoting Britain’s future trading role on the international stage after the British MEP claimed the Government banned him from meeting with President Donald Trump during his week to the United Kingdom next week.

Downing Street however hit back at the claim. A spokesman said: “Who the President meets during his visit is of course a matter for him.”

President Trump is likely to share his thoughts on the Brexit turmoil during his visit to London between June 3 to 5.

Mr Trump will also tell outgoing Prime Minister Theresa May that her successor should ban Huawei from building 5G networks.

The President and his wife, Melania, are set to be treated to a display of British royal pageantry during the visit, along with lunch with Queen Elizabeth, tea with heir Prince Charles, a banquet at Buckingham Palace and a tour of Westminster Abbey, coronation church of English monarchs for 1,000 years.

COVID-19: Face masks set to become ‘personal choice’ – but some medical experts may continue to wear them