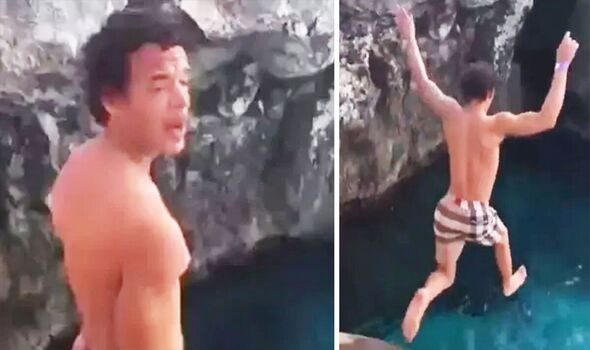 Pictures have emerged showing the tragic final moments of a British tourist before he was gunned down in bloody “contract killing”.

Sean Patterson, 33, shared with a family friend a video of him enjoying a carefree cliff jump into the crystal clear waters of the Caribbean in his final moments before he was shot dead on Monday.

Jamaican detectives have claimed the shooting of a Mr Patterson on the island was a “contract killing” by “unknown assailants”.

In a statement released last night Jamaican Deputy Commissioner of Police (DCP) Fitz Bailey said that Mr Patterson had been murdered in an act that “emanated from Britain”.

The personal trainer from west London was shot several times by the pool of a villa in Bogue Heights, St James, just after noon on Monday, Jamaica Constabulary Force (JCF) said.

Footage published by The Sun showed Mr Patterson jumping from a cliff into the sea in one of his final acts on the trip after he flew to the Caribbean with another man on December 29.

His mother Lesley Wright, 63, told the Sun Mr Patterson had sent the video to a childhood friend. She told the paper: “He winked and sent it to Carmel. He said “you should come out here”. She wanted to go, I said “you can’t!”.

It’s reported Sean was due to marry his long-term fiancée Anuja and the pair were planning a three-day Nepalese wedding this year. The JCF said one man has been taken into custody as they continue to work with UK authorities on the investigation.

DCP Bailey said in the video statement Mr Patterson had previous convictions in the UK for drugs, violence and firearm offences.

He said after arriving in Jamaica Patterson and another male met up with Oshane Richards, who lives in Kingston, Jamaica, and who had been deported from the UK in 2013 after three years in jail for crack cocaine possession, to go to a concert on January 1, in Priory, St Ann’s.

DCP Bailey said the next day, Mr Patterson and Mr Richards went to the pool deck at around midday and were both talking on their phones. He said: “Richards reported that his back was turned to Patterson when he heard several loud explosions sounding like gunshots.

“He reported that he looked around and saw a lone man dressed in a black hooded sweatshirt with a handgun shooting Patterson. Richards allegedly ran off (into) the bushes.”

DCP Bailey said police were called to the scene where they found Mr Patterson “clad in grey shorts on his back in a pool of blood with what appeared to be gunshot wounds to the upper body and head”.

He said: “From credible evidence received, Sean Patterson is well-known to the UK authorities and has an extensive criminal record for a number of offences which include narcotics, violence and firearms.

“Our investigation so far has theorised that the murder was a contract killing that emanated from Britain.

“There’s no evidence that Patterson was robbed or has any connection in Jamaica.”

A Foreign Office spokesperson said they are currently “supporting the family of a British man who died in Jamaica and are in contact with the local authorities”.

Mr Patterson’s mother, Lesley Wright, told the Daily Mail that her son, who has family in Jamaica on his dad’s side, had travelled to the Caribbean with her godson and one of her best friends.

She said: “I’ve lost my baby. No mother should have to bury her child.” She also said her son was “the loveliest, sweetest boy and the kindest most happy-go-lucky-man” and not “the argumentative type” so she was at a loss over the motive behind his killing.”

She said: “We hope for justice and that my son’s killer is taken off the street where they can’t hurt anyone else and destroy another family.”