Jan Myrdal, a radical Swedish writer who spurned the liberal politics of his famous Nobel-winning parents and embraced Communism, Marxism and Maoism, died on Oct. 30 in Varberg, Sweden. He was 93.

His death was announced by Cecilia Cervin, a former chairman of the Jan Myrdal Society, a group dedicated to preserving his extensive book collection.

Mr. Myrdal traveled and wrote widely, specializing in Asia. He depicted life in a small Chinese village during the Cultural Revolution and his writings extolled the virtues of some authoritarians. He abhorred the the damaging effects of Western imperialism on developing countries.

But perhaps nothing in his career as a polemicist garnered him as much attention as the books he wrote expressing his distaste for his parents, Gunnar and Alva Myrdal. The elder Mr. Myrdal was an economist and sociologist who shared the 1974 Nobel in economic science with Friedrich A. von Hayek, and wrote “An American Dilemma: The Negro Problem and Modern Democracy” (1944), a pioneering study of race.

But to Jan, his parents were cold, cruel and contemptuous. They called him a “problem child,” and left him with relatives (whom he preferred) for extended periods when they traveled.

In several autobiographical novels, beginning with “Childhood” (1982), he wrote that his father mocked him for being overweight, asking him, “Are you going to give birth soon?” He said his mother treated him like a research subject, recording what he said in a notebook.

Once, he recalled, Gunnar drove his car into a ditch, causing Jan to fall out of the car and hit his head. Bleeding and hoping for sympathy, he heard his father tell him, “Don’t act silly.”

His feelings of not belonging led him at around age 10 to ask his father, “Am I your illegitimate son?” The question angered his father, who did not answer, but slammed the door behind him.

The accusations against the prominent Myrdals stirred a scandal in Sweden — not long before Mrs. Myrdal was awarded her Nobel — and turned “Childhood” into a best seller.

When excerpts from the book ran in newspapers, they had headlines like “I Detest My Mother and My Father Because They Never Gave Me Love.”

Jan Myrdal was born on July 19, 1927, in Stockholm and moved with his parents and younger sisters, Sissela and Kaj, to New York City in 1938, when his father was hired by the Carnegie Corporation to study racism in the United States.

Jan enjoyed living in Manhattan, where he attended private school and read with fascination books about the French Revolution and the works of the Swedish writer August Strindberg.

But he was angry when his parents made plans to return to Sweden in 1942. The pending move led to a fight with his father, who, he said, grabbed him by the neck, shook him hard and pinned him to the floor.

At 15, calling himself a Communist, Jan left his family, dropped out of school and began a peripatetic, decades-long career as a writer, provocateur and public intellectual.

“I chose to write,” he told United Press International in 1987. “It meant I had to break with school and that kind of education. That I knew from Strindberg and others. One had to make oneself impossible from the start, tear down bridges.”

Mr. Myrdal began writing books in the mid-1950s but did not attract much attention until he wrote “Report from a Chinese Village” (1965), which was based on a month that he spent in 1962 interviewing the people of Liu Ling, a tiny, rural collection of man-made caves.

“In many ways, this is the book that everybody interested in China has been waiting for, a book describing what it feels like to be a peasant living through the Cultural Revolution.” Martin Bernal, an expert on Chinese political history, wrote in The New York Review of Books. He praised the book for the candid stories told by the villagers.

Some of Mr. Myrdal’s other foreign travel work and political commentary raised questions about his allegiances or were seen as overly sympathetic to authoritarian rulers.

In 1970, after visiting Albania, when it was still ruled by the dictator Enver Hoxha, he published “Albania Defiant.” In a review in The New York Times, Anatole Shub wrote that it “conveys the Gospel according to Hoxha in basically uncritical, dogmatic Marxist terms” and showed “unlimited admiration” for the Albanian people and for Hoxha’s brand of socialism.

Then, in October 1979, he visited Cambodia shortly after the murderous dictator Pol Pot had been driven largely from power by Vietnam but still controlled parts of the country. A year earlier, Mr. Myrdal had met Pol Pot, who is said to have conducted a reign of terror that led to the deaths of nearly one-quarter of Cambodia’s 7 million people. Pol Pot signed Mr. Myrdal’s visa

After his trip, where he was babysat by a government official, Mr. Myrdal told The Times that he had seen no “horror stories.”

And Mr. Myrdal punctuated a visit to Iran in 1990 by voicing his support for Ayatollah Ruhollah Khomeini’s fatwa that Muslims should kill Salman Rushdie for what the Iranian cleric called blasphemy in his novel “The Satanic Verses.” Mr. Myrdal told a Swedish newspaper that the order let oppressed Muslim masses in Europe be part of a struggle “for their human dignity.”

Mr. Myrdal’s survivors include his sisters, Sissela Bok, an ethicist and philosopher, and Kaj Folster, a writer. Three of his four marriages ended in divorce. His third wife, Gun Kessle, whose photographs illustrated many of her husband’s books, died in 2007. 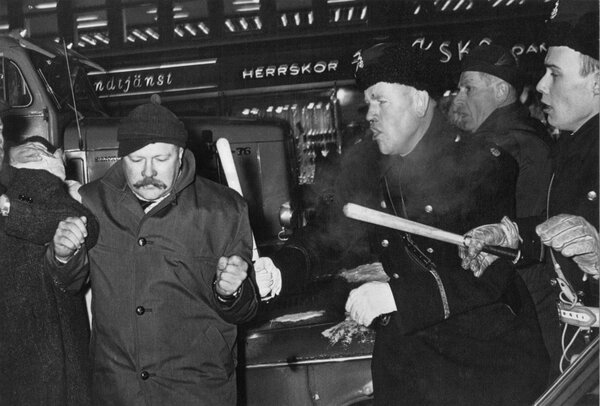 In 1967, well after Mr. Myrdal became estranged from his parents, he was beaten with a baton by police and arrested during an anti-Vietnam War protest in Stockholm.

Still, even in a protest against the United States in the streets of his hometown, he could not avoid the scrutiny of his parents. His mother, then a cabinet minister, had been part of the government's decision to deny a permit to the protest. And his father publicly criticized his son for demonstrating.

“He was insane,” Mr. Myrdal said to U.P.I. about his father’s rebuke. “And six months earlier, Alva had said we should stop seeing each other to avoid compromising her position.”

What does Tier 3 mean for Christmas?
Asia