The Chancellor has started to lay out plans to tackle a £54 billion package of tax hikes and spending cuts in his budget speech.

Jeremy Hunt is unveiling his plan in Parliament that he hopes to weather the ‘economic storm’ brewing in the UK.

He said his main priorities within the budget are ‘Stability, growth and public services.’

The Chancellor told the Commons a number of economic changes he is planning to tackle the huge debt the country is currently in.

Mr Hunt said he will increase the NHS budget by an extra £3.3 billion in each of the next two years.

He said electric vehicles will no longer be exempt from Vehicle Excise Duty from April 2025.

Another major announcement was that Kwasi Kwarteng’s stamp duty tax cut will be reversed in 2025.

What has Jeremy Hunt announced in the Budget?

-An extra £2.3 billion per year will be invested in schools in England over the next two years.

– The NHS budget in England will increase by an extra £3.3 billion in each of the next two years.

– Electric vehicles will no longer be exempt from vehicle excise duty from April 2025, to make the motoring tax system ‘fairer’.

– Government spending will continue to increase in real terms every year for the next five years, but at a slower rate than previously planned.

– The Government would protect the increases in departmental budgets already set out in cash terms for the next two years, meaning real-terms cuts due to inflation and pressure on public sector wages.

– The defence budget will stay at 2% of GDP

– The implementation of social care reforms will be delayed for two years.

– The energy price guarantee scheme will increase from £2,500 for the average household to £3,000 for 12 months from April.

– An extra £6 billion of investment in energy efficiency from 2025 to help meet a new ambition of reducing energy consumption from buildings and industry by 15% by 2030.

He increased the windfall tax on oil and gas giants from 25% to 35% and imposed a 45% levy on electricity generators to raise an estimated £14 billion next year.

Around 600,000 more people on Universal Credit will be asked to meet with a work coach to increase hours or earnings, he said.

The defence budget will be maintained at at least 2% of GDP, he added.

The Prime Minister gave his Chancellor a supportive pat on the shoulder as he entered the Commons ahead of the autumn statement.

Sitting behind Rishi Sunak and Jeremy Hunt were former prime ministers Boris Johnson and Theresa May. 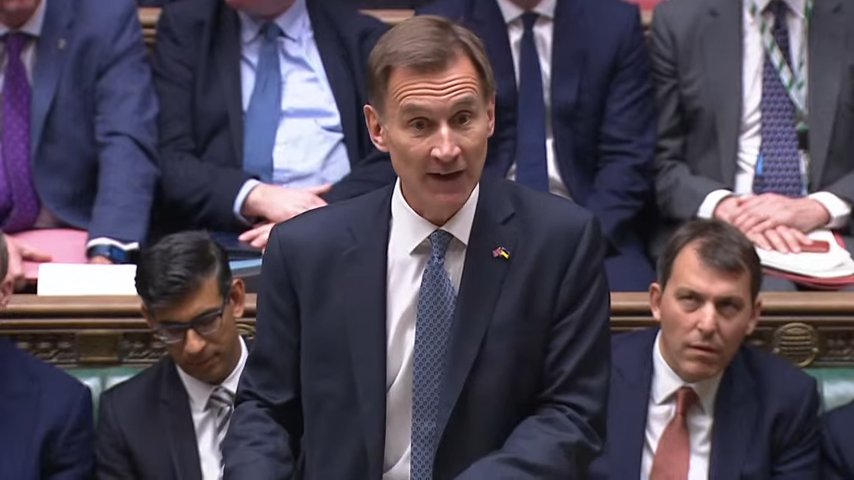 Mr Hunt told the Commons: ‘We are not alone facing these problems, but today our plan reflects British values as we respond to an international crisis.

‘We are honest about the challenges and fair in our solutions. Yes, we take difficult decisions to tackle inflation and keep mortgage rises down but our plan also leads to a shallower downturn; lower energy bills; higher long-term growth; and a stronger NHS and education system.’

‘It erodes savings, causes industrial unrest, and cuts funding for public services. It hurts the poorest the most and eats away at the trust upon which a strong society is built.’

He tore down almost all of the policies of his predecessor, Kwasi Kwarteng.

He said high inflation is the ‘enemy of stability.’

He added: ‘We are not alone facing these problems, but today our plan reflects British values as we respond to an international crisis.

‘We are honest about the challenges and fair in our solutions. Yes, we take difficult decisions to tackle inflation and keep mortgage rises down but our plan also leads to a shallower downturn; lower energy bills; higher long-term growth; and a stronger NHS and education system.’

He said: ‘Three priorities then today: stability, growth and public services. I start with stability.

‘It erodes savings, causes industrial unrest, and cuts funding for public services. It hurts the poorest the most and eats away at the trust upon which a strong society is built.’

The Chancellor has announced two new fiscal rules, telling the Commons: ‘The first is that underlying debt must fall as a percentage of GDP by the fifth year of a rolling five-year period.

‘The second, that public sector borrowing, over the same period, must be below 3% of GDP.”

The Chancellor went on: “The plan I’m announcing today meets both rules. Today’s statement delivers a consolidation of £55 billion and means inflation and interest rates end up significantly lower.

‘We achieve this in a balanced way: in the short term, as growth slows and unemployment rises, we will use fiscal policy to support the economy.’

He said the OBR confirms ‘that because of our plans, the recession is shallower, and inflation is reduced’, adding: ‘Unemployment is also lower with about 70,000 jobs protected as a result of our decisions today.

‘Then, once growth returns, we increase the pace of consolidation to get debt falling.

‘This further reduces the pressure on the Bank to raise interest rates because as Conservatives we do not leave our debts to the next generation.’

It has also been rumored that he will announce an increase in the minimum wage, which could raise to £10.40 an hour.

Mr Hunt has previously warned everyone will pay more tax and billions will be cut from public spending – and pinned the blame on Liz Truss.

He said in a video before his Autumn Statement: ‘We are having to take some difficult decisions to restore stability, bring inflation down and balance the nation’s books.

‘So this is our plan to build a stronger economy, protect public services and make sure we look after our most vulnerable.’

His plans are a far cry from the last time the government set out its spending priorities, when tax cuts were on the table in September – but sent the markets into meltdown due to being funded by borrowing.

It led to the resignations of former PM Liz Truss and her chancellor Kwasi Kwarteng.

The UK is facing the effects of the global economic crisis.

Difficult decisions need to be taken now to drive down inflation – the hidden tax eating into household budgets.

The Cabinet has set out why we are prioritising stability, growth and public services â¬ï¸ pic.twitter.com/VOUg5AMBeh

Harriett Baldwin, chairwoman of the Treasury select committee, said it was ‘really welcome’ that the Chancellor’s autumn statement today will come with an OBR forecast – unlike the last ‘mini-budget’.

Ms Baldwin told Sky News that it would ‘help to reassure the markets that there is someone marking the Chancellor’s homework’.

Ms Baldwin added that the committee wanted ‘to see something that will help work with the grain of what the Bank of England is trying to do to bring down inflation’.

She said inflation was ‘the worst economic problem in this country at the moment’, adding that the UK needed to get it ‘back in its box’.

New inflation figures yesterday show that prices rose by 11.1% in the year to October – the highest rate in 41 years since 1981.

Torsten Bell, chief executive of the Resolution Foundation think tank, said he was expecting some ‘pretty bad economic news’ to coincide with the budget.

He told Sky News the UK faced a ‘grim economic outlook’, with the economy growing very slowly and ‘possibly ending this Parliament as weak as it began’, adding that this would be ‘much weaker than we were previously expecting’.

The head of the economic think tank said that he expected unemployment to rise, ‘which is the opposite of what we’ve been seeing in the recent past’.