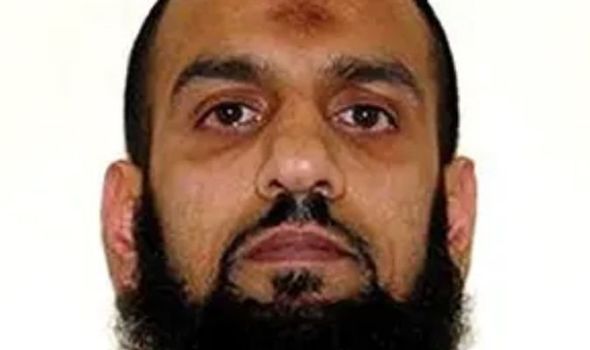 Jobless Parviz Khan, 49, was jailed for life in 2008 for the plot to kill, and for sending equipment to terrorists in Pakistan. The Birmingham-based extremist, who planned to slaughter a serviceman “like a pig”, received £1,696 a month in benefits while plotting his atrocity, including £160 a week as an allowance to care for his elderly mother. He was arrested before identifying a target and admitted the plan at Leicester Crown Court in February 2008.

Records show the married father of four claimed £1,072,398 in legal aid, of which £345,842 went to his solicitors and the remainder to barristers representing him.

Derby-born Khan is eligible for parole in February 2021, having served a minimum 14 years of his life sentence from being on remand after his arrest in 2007. Three members of his gang have already been released.

Zahoor Iqbal, 41, Mohammed Irfan, 42, and Hamid Elasmar, 55, were freed in October 2009 with African recruit Basiru Gassama, 41, who was deported to Gambia.

Nigel Rumfitt QC said of the beheading plan: “The initial idea was to approach him [the soldier] in Broad Street [in Birmingham] and lure him into a car, then take him to a lock-up garage and there he would be murdered by having his head cut off ‘like a pig’.”

After the trial Det Supt Liam O’Brien described Khan as “a dangerous man who had deep and entrenched views”. He warned at the time: “I strongly believe that, if we hadn’t taken action, we would be talking about the kidnap and murder of a British soldier.”

Khan was a keen Sunday league footballer and cricketer before he was radicalised during several trips to Pakistan. He then became a fanatic who spoke of the July 7 bombers as “brothers”.

Arrested four months after naming his third child Usamah – a version of Osama – Khan was “training” his three-year-old daughter to marry a Mujahideen fighter.

Critics slammed the level of public funding for Khan, contrasting it with reports that families of victims of the London Bridge, Westminster and Manchester Arena attacks were denied legal aid.

Rakib Ehsan, a research fellow at the Henry Jackson Society, said: “Hard-working British taxpayers will be understandably miffed over the eye-watering amounts of public money spent on funding the legal defence of Islamist extremists.

“Much of the wider public continue to hold fears over convicted terrorists being freed from prison and into their local communities.”

David Green, director of think tank Civitas, said: “He should have received a whole of life sentence, which would have excluded any possibility of parole.”

A Ministry of Justice spokeswoman said: “Payments are sent directly to solicitors and barristers to ensure a fair trial so criminals can be properly convicted.”

Badger cull: Thousands to be put down in seven new areas across England as government battles bovine TB