GENEVA — A United Nations expert on torture sharply rebuked Britain, Sweden and the United States on Friday for what he called a concerted campaign of persecution and abuse against the WikiLeaks founder Julian Assange, and said he should not be extradited into American hands.

The United Nations special rapporteur on torture and ill treatment, Nils Melzer, who is also an international law professor, said the evidence was “overwhelming and clear” that Mr. Assange had been deliberately exposed for several years “to progressively severe forms of cruel, inhuman or degrading treatment or punishment, the cumulative effects of which can only be described as psychological torture.”

Mr. Melzer said this included systematic abuse of judicial powers; arbitrary confinement in Ecuador’s London Embassy, where he had sought asylum and was eventually ousted in April and arrested by the British police; harassment and surveillance inside the embassy; and a “relentless and unrestrained campaign of public mobbing, intimidation and defamation” outside it, including threatening statements by senior politicians and judicial officials.

Mr. Melzer issued his statement three weeks after visiting Mr. Assange at Britain’s high-security Belmarsh prison, accompanied by two medical experts, to conduct a physical and psychological examination. He said he had sent his findings to the governments of Britain, Sweden and the United States, along with Ecuador.

Mr. Melzer said the examination of Mr. Assange, carried out in early May, showed that “his capacity to focus and coordinate have been clearly affected” by his circumstances and by the extreme stress and chronic anxiety arising from them.

WikiLeaks also said that when Mr. Assange’s Swedish lawyer, Per Samuelson, visited him in Belmarsh on Friday, he found “that it was not possible to hold a normal conversation with him.”

The website disclosed on Thursday that Belmarsh prison authorities had moved Mr. Assange to its hospital wing after he had experienced drastic weight loss, and expressed concern over a serious deterioration in his health.

Mr. Assange, 47, had stayed in Ecuador’s Embassy in the British capital for seven years to avoid being extradited to the United States. After the Ecuadorean government withdrew its protection and allowed the police to remove him, a British court sentenced him to 50 weeks in jail for jumping bail.

He now faces possible extradition to Sweden, for an investigation into rape allegations, or to the United States, which has charged him with multiple counts of espionage for his part in the release of thousands of classified military and diplomatic cables in 2010. Critics say the Trump administration’s charges against Mr. Assange take direct aim at previously sacrosanct press protections. 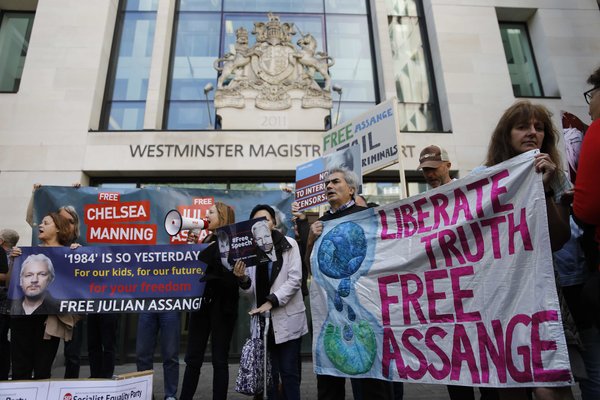 Sweden’s deputy public prosecutor, Eva-Marie Persson, said that on Monday she would apply to a court in Uppsala, Sweden, for Mr. Assange to be detained in absentia, paving the way for her to issue a European warrant for his arrest. The British government would then have to decide if the Swedish or the American case had priority.

Mr. Assange was to appear by video link on Thursday from Belmarsh at a court hearing on the United States’ application for his extradition, but his British lawyer, Gareth Peirce, said her client had not been well enough to participate. The presiding magistrate set June 12 for the next hearing and suggested it could be held in Belmarsh prison.

He cited the treatment experienced by Chelsea Manning, the former Army intelligence analyst who sent WikiLeaks classified cables on events in Iraq and Afghanistan, as grounds for concern about the conditions in which Mr. Assange would be held. He also said that he was convinced Mr. Assange would not receive a fair trial.

Mr. Melzer is not the first United Nations expert to criticize the treatment of Mr. Assange. The United Nations Working Group on Arbitrary Detention condemned the 50-week sentence for jumping bail as excessive and said that sending him to a high-security prison was akin to a conviction for a serious crime.

Mr. Melzer said he had initially been sceptical about Mr. Assange’s case and had turned down a request from Mr. Assange’s lawyers in December to investigate his situation.

But what he found after accepting a second request from the lawyers in March changed his mind, he said.

“Wherever I delved into the case, I found a lot of dirty stuff,” he said in a phone interview.

In 20 years of working with victims of war, violence and political persecution, Mr. Melzer added in his statement, he had “never seen a group of democratic states ganging up to deliberately isolate, demonize and abuse a single individual for such a long time and with so little regard for human dignity and the rule of law.”

He also challenged the conduct of Sweden’s prosecutors and criticized Britain’s treatment of Mr. Assange, saying that the limitations imposed on his access to lawyers and to the complex documents relating to the charges severely impaired his ability to prepare his defense.

Mr. Assange has been hailed by many as a champion of transparency. But to some government officials, he has been seen as something of a menace.

John Demers, the head of the Justice Department’s National Security Division, told reporters in May that Mr. Assange was “no journalist.” He added: “No responsible actor, journalist or otherwise, would purposefully publish the names of individuals he or she knew to be confidential human sources in a war zone, exposing them to the gravest of dangers.”

And after the relationship with Ecuador turned sour and its officials said they were subjected to threats and leaks — an anonymous website published intimate images of President Lenín Moreno and his family on vacation, text messages from his wife and a photo of the president eating lobster in bed — the country’s vice president blamed WikiLeaks, saying its actions were “despicable” and vowing to take action.