The European Commission President said his UK counterparts saw the EU as just a financial partnership, which helped Leave campaigners in their Brexit fight. Mr Juncker believes EU enlargement plans, which saw a host of Eastern European countries join the bloc, were sold in Britain as a victory for business.  But the levels of immigration into Britain were soon seized upon by Brexiteers during the EU referendum campaign in 2016.

Speaking to Hungarian outlet HGV, Mr Juncker said: “Over decades of meeting British politicians, my impression has always been that they don’t feel at home in the EU.

“I’ve not met anyone in their political elite who was passionate about Europe.”

He argued that British politicians “for decades” had told voters the EU’s main purpose was for financial cooperation and not to share common values.

He suggested this had enabled Brexiteers in Britain to successfully campaign to quit the EU. 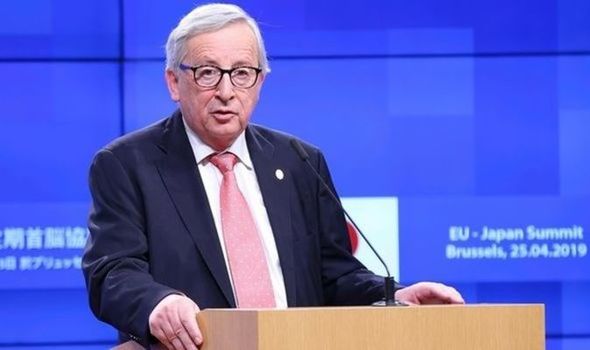 “This was the reason why they so eagerly supported the 2004 enlargement,” he said.

At the time, former prime minister Tony Blair failed to “introduce any transitional restrictions whatsoever” that would have restricted access to the UK, according to Mr Juncker.

And now he believes this gave Brexiteers the winning formula ahead of the historic 2016 referendum.

Mr Juncker bemoaned: “And now we all bear the brunt of this measure.”

But the Commission chief, who is set to retire from his role in October, doesn’t believe any other countries will quit the EU.

Britain has paved the way for countries to quit the bloc but “even in countries sometimes governed by Euroskeptics, the majority is pro-EU”, he said.

The eurocrat added: “Article 50 does give everyone the possibility to leave, though. The Brits have shown us that you cannot imprison those who don’t want to stay.”