Just Stop Oil activists tucked themselves into a Harrods display bed – worth £28,000 – as part of fuel poverty protests sweeping the UK.

The eco-activists are taking action over ‘sky-rocketing’ energy bills and have been joined by other grassroots movements, including Don’t Pay UK and Fuel Poverty Action.

They said they were ‘rapidly’ escorted out of the department store by about 20 security guards.

Protests were held across the country, including at the British Museum and Scottish Power’s HQ as part of a national day of action on fuel poverty, organisers said.

Don’t Pay said campaigners bedded down with blankets, sleeping bags and hot water bottles in the foyer of Glasgow-based Scottish Power at about 9am.

Footage showed visitors in the background as campaigners sat in a circle on the floor. 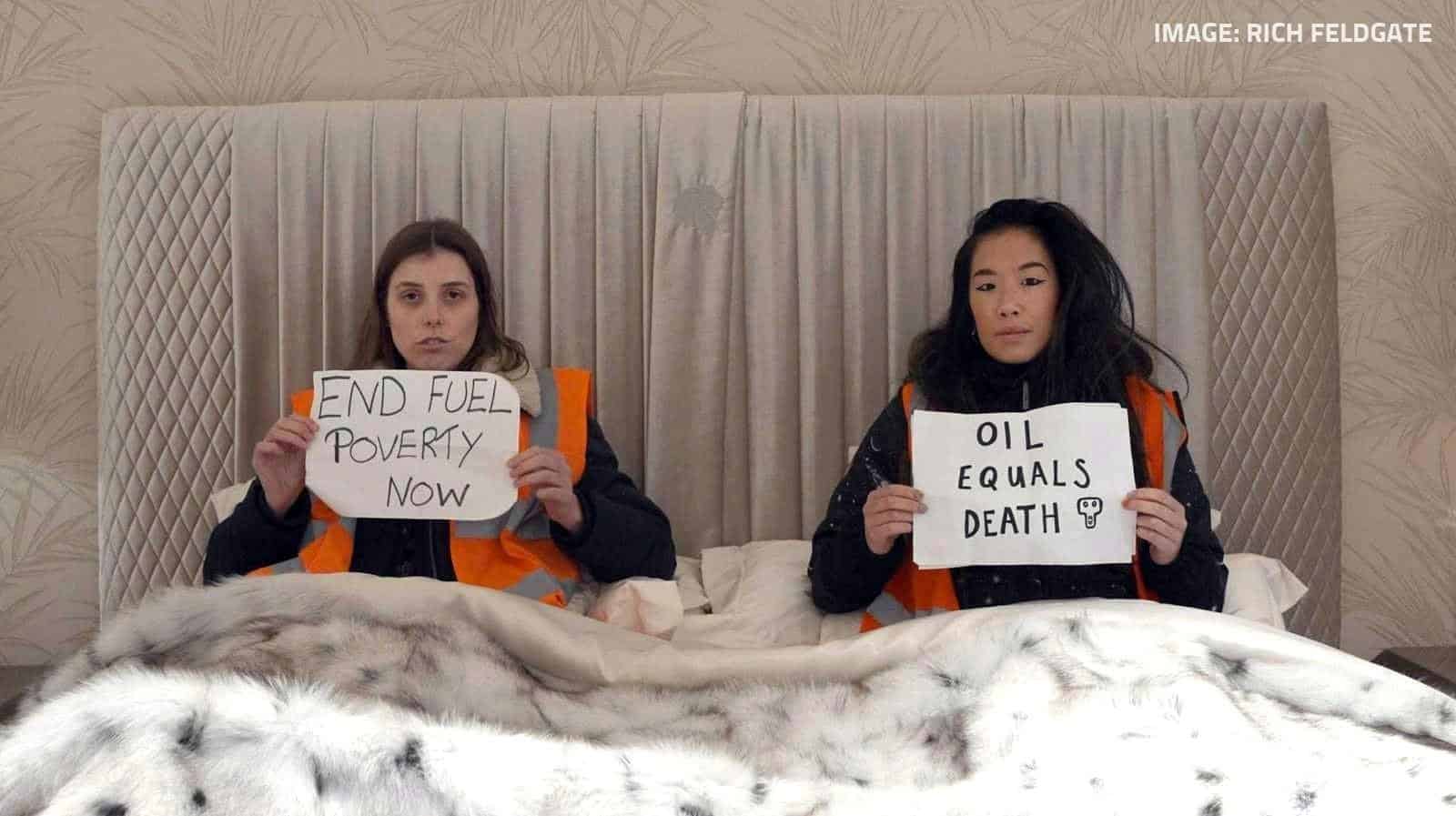 In Hastings, campaigners were due to enter a Barclays branch due to the bank’s investments in fossil fuels, which campaigners say exacerbate energy prices and the climate crisis.

Other warm up protests were set for a shopping centre in Manchester, and in Liverpool, Brighton and Bristol.

A Just Stop Oil spokesman said: ‘This government is allowing ordinary people to starve and freeze this winter as greedy energy companies squeeze every last penny out of us. The health service is in crisis, workers’ wages are being squeezed and nurses are using food banks.

‘Austerity is a political choice and the cost-of-living crisis is an unprovoked attack on ordinary people.

‘They are signing our death warrants. New oil and gas is criminal, an act of genocide against billions of people in the poorest countries on Earth and an act of war against the young.’

Neil Smith from Don’t Pay added: ‘No one should go cold in winter, yet what we’re seeing is a mass default on these extortionate energy bills and thousands set to freeze in their homes.’

Working together, the groups want the Government to immediately tackle the energy and cost-of-living crisis by introducing Energy For All, defined as ‘a universal, free band of energy to cover people’s necessities’.

The movement would be paid for by “ending all public money subsidising fossil fuels, a more effective windfall tax on energy companies and higher tariffs on luxury household energy use”.

Stuart Bretherton, Fuel Poverty Action co-ordinator, said: ‘Energy For All would achieve what our energy system and economy should ultimately be geared towards – ensuring everyone’s basic needs are met.

‘Ordinary people cannot keep footing the bill for crises created by the wealthy; it’s time for the big polluters and profiteers to pay their share.

‘Through this we could also incentivise much needed climate action on home insulation and a transition to renewables.’

One in five people suspect they've been targeted by coronavirus scams

No jab no job – will the COVID vaccine policy cripple care and NHS?