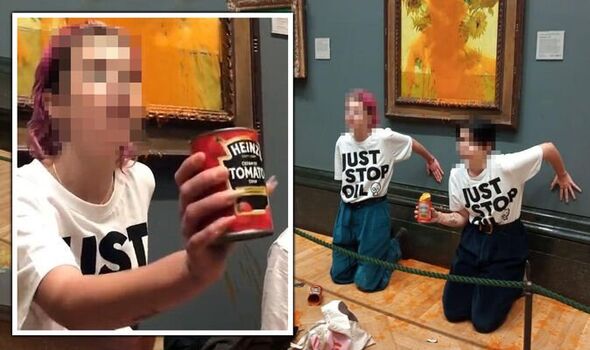 Just Stop Oil protesters have thrown tinned soup at Vincent Van Gogh’s famous 1888 painting Sunflowers at the National Gallery in London. Two activists threw two tins of Heinz tomato soup before security was called in and visitors escorted out of the room.

The two women strolled into a room in the National Gallery at 11am today (October 14) and threw the contents of two tins of soup over the priceless painting.

The action comes after two weeks of chaos in the capital caused by supporters of Just Stop Oil.

Activist Phoebe Plummer, 21, from London said: “Is art worth more than life? More than food? More than justice? The cost of living crisis is driven by fossil fuels—everyday life has become unaffordable for millions of cold hungry families—they can’t even afford to heat a tin of soup.

“Meanwhile, crops are failing and people are dying in supercharged monsoons, massive wildfires and endless droughts caused by climate breakdown. We can’t afford new oil and gas, it’s going to take everything. We will look back and mourn all we have lost unless we act immediately.”

Anna Holland, 20, from Newcastle said: “Families will be forced to choose between heating or eating this winter, as fossil fuel companies reap record profits. But the cost of oil and gas isn’t limited to our bills.

“Somalia is now facing an apocalyptic famine, caused by drought and fuelled by the climate crisis. Millions are being forced to move and tens of thousands face starvation. This is the future we choose for ourselves if we push for new oil and gas.”

The campaign group said: “We will not be intimidated by changes to the law. We will not be stopped by private injunctions sought to silence peaceful people. Our supporters understand these are irrelevant when set against mass starvation, slaughter, the loss of our rights, freedoms and communities.”

Some 26 protesters created the roadblock at St George’s Circus in Southwark at 9am on Thursday. The Metropolitan Police removed and arrested 20 people, including 10 who had glued themselves to the road. They were taken into custody at central London police stations.

A video shared on the Just Stop Oil Twitter account showed protesters walking on to a road and sitting down in hi-vis jackets, holding the group’s distinctive orange banners.

As they sat down, drivers began beeping their horns. The video was accompanied by the caption: “Surprise, we’re at it again this morning.”

Denmark, Australia extend tests to those with mild symptoms