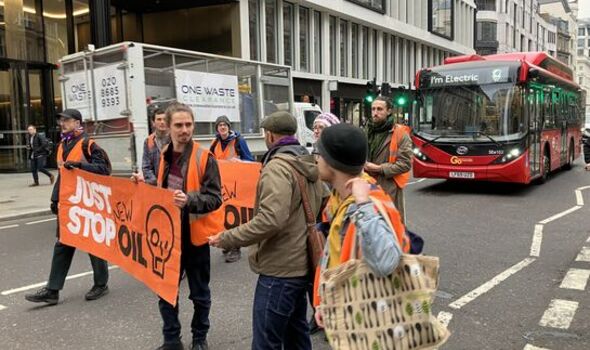 Eco protesters from Just Stop Oil have left Londoners scratching their heads as they are blocking an electric bus. The handful of people from the campaign group are walking in the street near the Barbican, central London, with banners which say ‘Just Stop Oil’.

But, as this picture from BBC News journalist Harry Low shows, they do not seem to realise they are holding up an electric bus.

If they looked back to see the traffic jam which is building up behind them they would see that the destination board of the bus even says “I’m Electric”.

The protest is part of a new wave of campaigning by the environmental group, which started on Monday.

The protesters are expected to target busy roads which will see them block major roundabouts, glue themselves to tarmac and march slowly in front of traffic.

A document circulated among Just Stop Oil activists advised them to target rush hour and encouraged them to be “locking on” when possible with glue, chain and bicycle locks.

The latest campaign is expected to last until at least December 14, at a time roads will be busy with only weeks until Christmas.

More motorists will also be on the roads due to commuters attempting to avoid the planned rail strikes to take place soon.

Scotland Yard is urging people not to take matters into their own hands if they are impacted by Just Stop Oil demonstrations.

Commander Karen Findlay said: “I completely understand the frustration and anger felt by the public who are seriously disrupted by a relatively small number of protesters and their deliberate tactics.”

She added: “Where activists cross the line into criminality, the Met will provide a proportionate policing response.

“We will arrive quickly, deal with the situation efficiently, remove and arrest activists as appropriate and return things to normal as soon as possible. Please do not take matters into your own hands.”

Prime Minister Rishi Sunak held a meeting in Downing Street recently with Home Secretary Suella Braverman and Police Minister Chris Philp as well as dozens of police chiefs to discuss what the response to Just Stop Oil should be.

In reaction to speculation that Mr Sunak will announce new crackdowns on protests, Just Stop Oil released a statement which said: “Does it feel like groundhog day? Haven’t we been here before with the last two prime ministers and their home secretaries?

“They say that repeating the same actions over and over again and expecting a different result each time is a sign of madness.

“But we already know that the government is deluded and out of touch. To blindly pursue new fossil fuel extraction when the IEA [International Energy Agency], the UN and 99% of the world’s scientists have said that to do so will lead to the collapse of human civilisation is, in the words of the UN secretary-general António Guterres, ‘moral and economic madness’.”