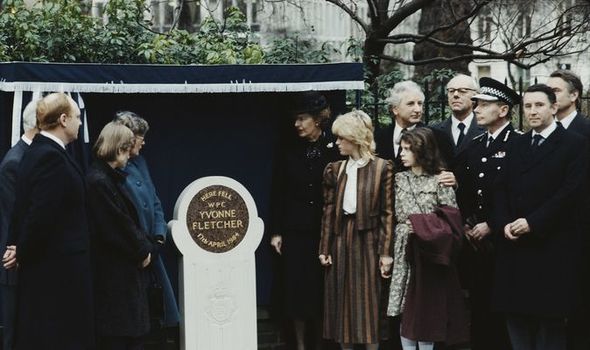 John Murray had promised Yvonne, 25, that he would bring her attackers to justice after she was shot while policing a protest at the Libyan embassy in London in 1984. He said outside the capital’s High Court yesterday: “I am very relieved that it’s finally over all. Everything we have done leading up to this verdict has been for Yvonne.” The actual gunman remains unidentified but Mr Murray had brought a civil claim for a nominal £1 against Saleh Ibrahim Mabrouk as part of his decades-long campaign.

Mr Justice Martin Spencer said that Mabrouk’s comment to an officer who was setting up barriers before the anti- Gaddafi demo was of “critical importance” in the case.

Mabrouk had said: “We have guns here today, there is going to be fighting. We aren’t going to have responsibility for you.” The judge found him jointly liable over the killing.

Mr Murray, 66, said: “We have finally achieved justice for Yvonne. This has been a battle lasting 37 years. It is a huge weight off my shoulders.”

He added: “We have faced many obstacles to get here. But…we have proven that we were right all along. Saleh Ibrahim Mabrouk was responsible for Yvonne’s death.”

PC Fletcher’s family said the judgment was a reminder of the “tragic events” that had “a devastating and lifelong effect on Yvonne’s family and colleagues”.

A statement added: “Yvonne will always be in our thoughts and we will continue to be in close contact with New Scotland Yard regarding all aspects of her case.”

Lawyers for Mr Murray, of Chingford, east London had argued Mabrouk was jointly liable for the shooting, saying that while he did not fire any shots he was “instrumental” in the “orchestration” of a plan to use violence at the protest. Mr Justice Spencer said PC Fletcher died as a result of “a cowardly attack”.

Gunmen fired Sterling submachine guns from the embassy’s first floor at “unarmed and unsuspecting lawful demonstrators…uncaring of the risk posed to police officers going about their normal duties”.

The judge added: “I am satisfied on the balance of probabilities that there existed a common design to respond to the planned anti- Gaddafi protest by using violence.” Evidence pointed to Mabrouk being an “active participant” in a “common design to fire upon the demonstrators”.

Mr Justice Spencer concluded: “Mr Murray has succeeded in showing that the defendant Saleh Ibrahim Mabrouk is jointly liable with those who carried out the shooting of Yvonne Fletcher, for the battery inflicted.”