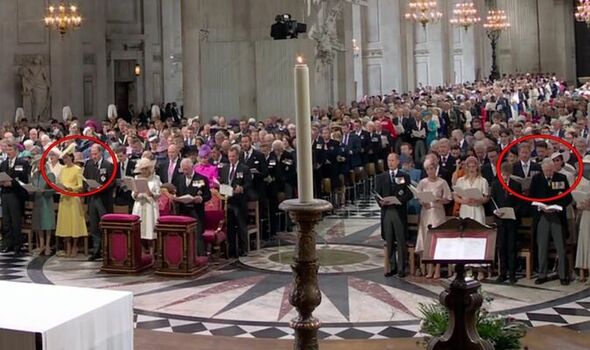 Kate was suitably fashionable as she arrived at St Paul’s Cathedral with Prince William to attend the service of thanksgiving.

The Duke and Duchess were among the handful of working royals taking part in the procession through St Paul’s nave, led by the Archbishop of York.

** Pick up your historic collector’s edition OK! Magazine Platinum Jubilee Special – in all good newsagents and online now for just £9.99 **

The other attendees were already seated as the Cambridges, the Prince of Wales and Camilla, Duchess of Cornwall made their entrance.

Among them, there were also Prince Harry and Meghan, who travelled from California earlier this week to celebrate the Queen’s milestone in person.

The Sussexes returned to Britain with their two children – Lilibet ‘Lili’ Diana and Archie Harrison.

While the Sussexes and the Cambridges had already met yesterday while watching the Trooping the Colour parade together from the Major General’s Office overlooking Horse Guards Parade, this marks the first time in more than two years Kate and Meghan are publicly seen at an official event.

Given her prominent role within the Royal Family, Kate is taking the centre stage throughout this Jubilee weekend.

She was among the working royals taking part in the Trooping of the Colour parade and the following balcony appearance.

Tomorrow, she has been tasked with Prince William to head to Wales and join the Platinum Jubilee Celebration Concert at Cardiff Castle.

There, they will learn about the show’s lighting, sound and visual effects before rolling up their sleeves and helping with some final preparations.

Meghan Markle’s ‘terrifying ordeal’ revealed: ‘It was the scariest moment of my life’