The Duke and Duchess of Cambridge arrived in Cutty Sark, east London, for a lunchtime engagement where they will launch a new sailing competition taking place on August 9 to raise money for eight of their charities. William and Kate are set to go head to head in person in the King’s Cup Regatta this summer, staged in the waters off the Isle of Wight, to raise awareness and funds for eight of their patronages.

At today’s launch, William and Kate were greeted by Sir Keith Mills and the Commodore of the Royal Squadron, Jamie Sheldon.

The couple took the chance to speak about Meghan Markle and Prince Harry’s first son, who was born yesterday at 5.26am.

The Duke of Cambridge said he is “absolutely thrilled” about the news, and jokingly mocked his brother Harry saying he welcomes him “to the sleep deprivation society”. 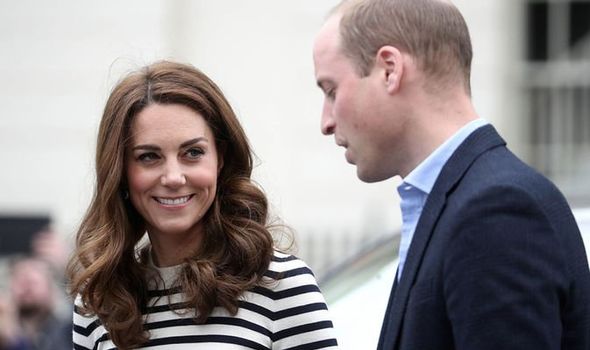 Kate and William welcomed the birth of Baby Sussex yesterday afternoon with a message shared on their Instagram account, kensingtonroyal.

The couple said they were “delighted” with the news of his arrival and looked forward to meeting the baby boy.

Meghan and Harry’s baby is seventh-in-line to the throne and cousin to the Cambridges’s children, Prince George, Princess Charlotte and Prince Louis.

Among the hundreds of comments congratulating on Meghan and Harry for the happy event, one Instagram user cheered at Kate and William for becoming “uncle and aunty” of Baby Sussex.

The social media user wrote: “Congratulations on the newly uncle and aunty and of course to the little royals of finally having their first first cousin.”

Meghan gave birth to a healthy baby boy at 5.26am on Monday, as revealed by Buckingham Palace.

Meghan and Harry announced the joyous occasion later in the afternoon with a message shared on their Instagram account, sussexoroyal.

It read: “We are pleased to announce that Their Royal Highnesses The Duke and Duchess of Sussex welcomed their firstborn child in the early morning on May 6, 2019.

“The Duchess and baby are both healthy and well, and the couple thank members of the public for their shared excitement and support during this very special time in their lives.

“More details will be shared in the forthcoming days.”

Is this the end of Labour? Ex-aide exposes brutal flaw with party if Long Bailey wins

Meghan Markle news: Why family will be ‘very important’ for Sussexes next month