Kate, who first spoke to Mila last autumn and promised to wear her favourite colour if they met, proved true to her word at the Palace of Holyroodhouse in Edinburgh. She invited Mila and her family to the Queen’s official residence in the Scottish capital and wore an ME+EM outfit that coordinated with the little girl’s pale pink dress. Mila, who has had several rounds of treatment for her illness, is featured in Kate’s lockdown photographic project, Hold Still, symbolising isolation during the pandemic.

The picture, captioned Shielding Mila, shows her kissing the kitchen window with her dad Scott outside their home in Falkirk, unable to risk bringing Covid-19 into the home during the first lockdown while he was going to work.

Kate and Mila talked on the phone after the image was selected for the Duchess’s exhibition and book and agreed to meet.

When Kate walked into the room Mila’s face lit up. Kate said: “Hi Mila, look at you! I want to give you a big squeezy cuddle, it’s so nice to meet you in person.”

Mila stood up as did her father and mother Lynda and her big sister Jodi. Kate told Mila: “I love your dress – can you do a little twirl – and your shoes.”

She spun round for the future Queen before running over to her dad.

When they spoke in the autumn, a conversation released by Kensington Palace, Mila asked: “Do you have a costume?” 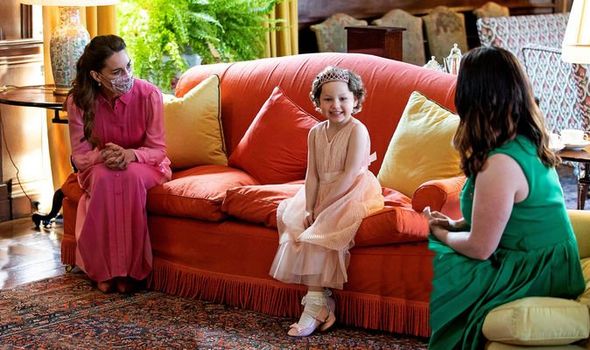 Kate, 39, replied: “I’m not wearing a princess costume right now, I’m afraid Mila. Do you have lots of dressing-up outfits?”

Mila said her favourite colour was pink and Kate added: “Hopefully Mila we’ll get to meet and then I’ll remember to wear my pink dress for you.”

Mila showed no nerves meeting royalty and Lynda revealed that away from the cameras the five-year-old did a handstand and cartwheel in front of the Duchess.

When Mila was asked about what she and the Duchess spoke about she replied: “Well I was busy drawing a picture – a robot.”

But she liked Kate’s pink dress and said about the experience: “It was so good, I’ve never met a real princess in my life before.”

There was an exchange of gifts with Kate giving Mila a tiny trinket box inscribed with a message about bravery while her young friend presented her with a candle and a bag.

Lynda said: “We’ve come out of lockdown and this is our first trip out which is really unusual.” 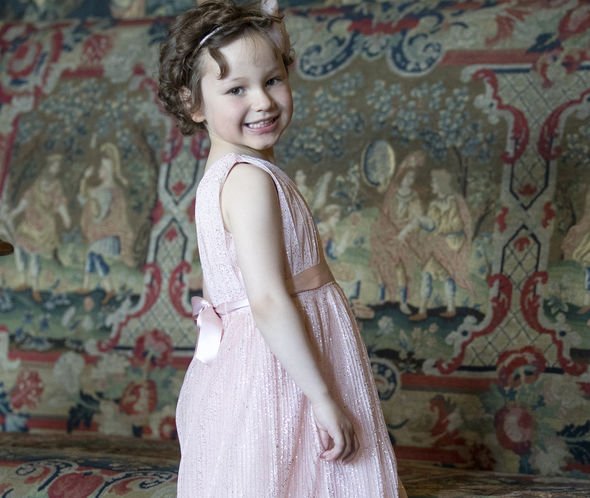 Earlier this month Mr Brown launched a campaign, aimed at the voters of “Middle Scotland”, to keep the Union together.

Some politicians hope the royal visit will help with this mission.

The Duke and Duchess spent the rest of the day with children at gardening and tennis projects.

The night before they had been building up their energy with a fish and chip supper from the chippy they used to go to when they were students at St Andrews University.

After buying the £7.95 takeaway haddock meal, wrapped in paper, from the award-winning Anstruther Fish Bar in Anstruther, they ate it on a bench on the pier. 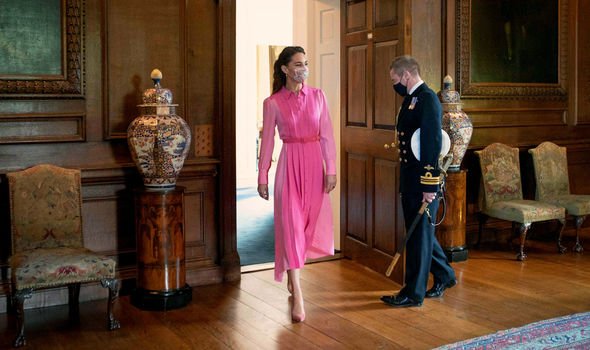 They then returned for an ice cream – his in a cup, hers in a cone – before boarding a helicopter back to Edinburgh. Kate reportedly told staff at the chippy the meal was a “trip down memory lane”.

The couple have been staying in the Scottish capital while they carry out royal engagements. Yesterday these included joining nursery school children on a nature trail scattering seeds for bee and butterfly-friendly plants in a park.

They also helped three young people doing their Duke of Edinburgh’s bronze award to plant sunflowers and an apple tree. The couple were at Starbank Park in the Trinity district of Edinburgh to support Fields In Trust, the organisation that seeks to protect parks and green spaces in perpetuity.

William, 38, became its president in 2013, taking over from his grand-father the Duke of Edinburgh, who had been involved with the organisation since 1948.

“You’re very good gardeners,” William told the children as they showed him how to plant the seeds.

The park has a small library in a box and Kate added to its stock by putting in a copy of Hold Still.

The Duke and Duchess also went to a Lawn Tennis Association Youth event in Edinburgh. Each joined a rival team, with their competitiveness coming to the fore again. William won…a day after beating Kate at land yachting in St Andrews. He could not resist rubbing it in when the total scores from the contests were counted up.

“You weren’t on the winning team again Catherine,” he said with delight. Afterwards, Katie Gallacher, 10, said: “It is the best day I have ever had at school.”

Later, Prince William proclaimed his love of Scotland at the General Assembly of the Church of Scotland. He said: “I am shaped by this place. The abiding affection I feel for it is rooted in my experience of its everyday life.”

He thanked the people of Scotland “who afforded us such a warm welcome. See you soon.”