Kate has been praised for her calm reaction after being challenged by a woman during a visit to Northern Ireland with Prince William today.

The Prince and Princess of Wales were taking part in a walkabout with crowds in Belfast when the incident unfolded.

The woman shook Kate’s hand and said: “Nice to meet you but it would be better if it was when you were in your own country.”

The woman, who appeared to be videoing the exchange on a mobile phone, added: “Ireland belongs to the Irish”.

The Princess of Wales smiled at the woman before moving on to shake hands with a well-wisher.

The exchange happened in what is a predominantly nationalist area of Belfast.

But royal fans rushed to Twitter to praise the future Queen Consort for keeping calm and carrying on.

One Twitter user with the handle @CamillaWindsor_ commented: “Catherine handled the situation very gracefully though.”

Another, @NaomiSky_15, wrote: “And the Princess of Wales handled it with Grace and Dignity. As always. Moving on.”

A third, @wildkudzu2, said: “Catherine just moved on without missing a beat. Lol.”

Royal fan account @lovefamilywales added: “That lady was very rude!! If she doesn’t like the Monarchy, why did she waste her time going there?

“But Catherine handled the moment perfectly and she and William were welcomed with open arms by the rest of the crowd everywhere they went! They are loved.”

A fifth Twitter user, Tina Zayas, gushed: “A true Queen!!! Great Britain is so lucky to have her as its next Queen Consort!” 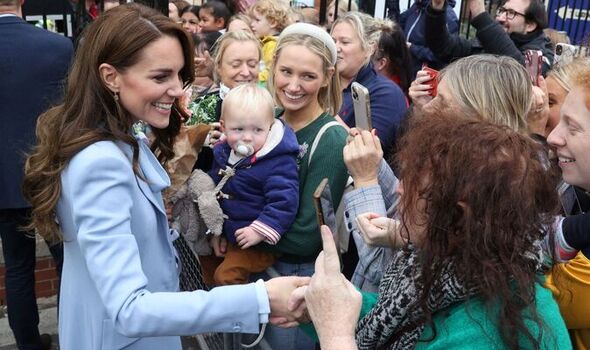