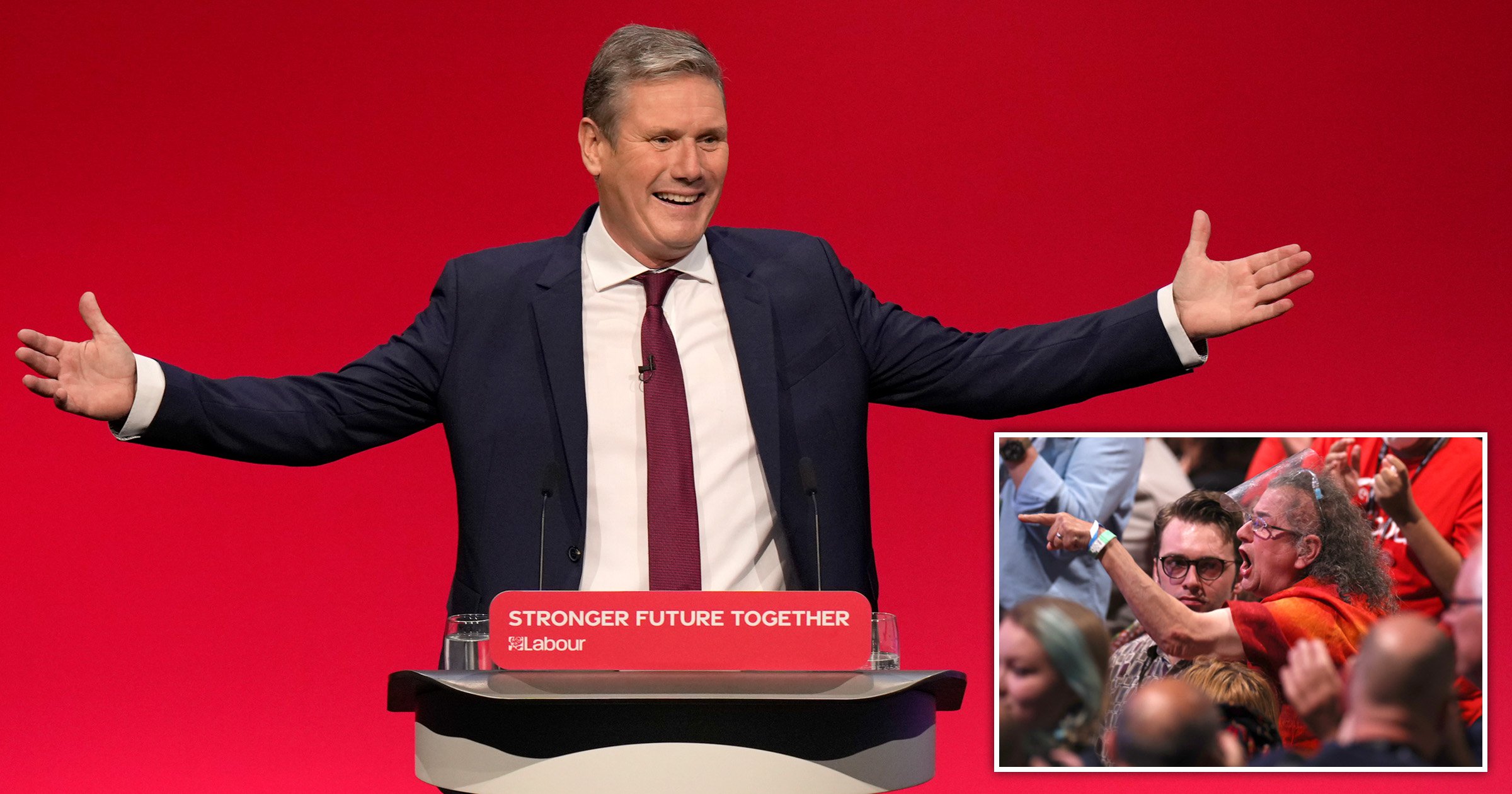 Sir Keir Starmer was repeatedly heckled while giving his first in-person speech to the Labour conference as he tried to relaunch his leadership of the party.

The Labour leader mostly ignored interruptions from the floor during the most important speech of his career, including someone shouting ‘oh Jeremy Corbyn’.

Later on, supporters of the leader tried to drown out the hecklers with applause as one woman jabbed her finger and shouted in the direction of Sir Keir.

She was later identified as Carole Vincent, a contestant on the eighth series of Big Brother who had previously stood as a council candidate for George Galloway’s Respect Party.

Her comments were not picked up by the microphones but the Labour leader responded: ‘Shouting slogans or changing lives, conference?’

Some continued to shout ‘shame’ and called for the leadership to support a raise in the minimum wage to £15-an-hour.

After being interrupted again, Sir Keir replied: ‘You can chant all day,’ before being applauded by the audience.

Sir Keir spoke about his own experiences with the NHS, praising those who cared for his mother, Josephine, a nurse who died just two weeks before he was elected as an MP in 2015.

But he was again heckled. Shouts were heard of ‘throw them out’, and one person yelled ‘it was your Brexit policy’ as Sir Keir spoke about why the party lost the last election.

Piers Morgan was one of those to comment on the heckling. He tweeted: ‘Disgusting to see @Keir_Starmer being rudely heckled by shrieking Corbynites as he speaks so movingly about his mother dying in hospital.

‘To borrow the buzz word of the Labour conference, they’re “scum”. They’re also empowering Starmer, who’s making the best speech of his life.’

Internal battles have dominated the conference in Brighton, the first major political event to be held in-person since the pandemic started.

Sir Keir was forced to water down proposals for electing future leaders of the party and he also clashed with the unions and lost one of his shadow ministers, Andy McDonald, who resigned over the minimum wage policy.

During a speech that lasted an hour and a half, Sir Keir insisted his party could win the next election, despite regularly trailing the Tories in the polls.

He began by targeting Boris Johnson’s handling of the fuel crisis, trying to paint the Prime Minister as a leader without a plan.

He told supporters in Brighton: ‘If you go outside and walk along the seafront, it won’t be long before you come to a petrol station that has got no fuel.

‘Level up? You can’t even fill up. Doesn’t that just tell you everything about this Government? Ignoring the problem, blaming someone else, then coming up with a half-baked solution.

‘Why do we suddenly have a shortage of HGV drivers? Why is there no plan in place?’

The Labour leader highlighted his background as the son of a toolmaker and an NHS nurse who later needed long-term care.

He also contrasted his past as the head of the Crown Prosecution Service with the Prime Minister’s background as a newspaper columnist.

He also promised to fast-track rape and sexual assault cases and tougher sentences for rapists, stalkers and domestic abusers.

The Labour leader used the speech to set out how he would tackle climate change, ahead of the UK hosting the Cop 26 conference later this year.

Plans include a ‘national mission’ to fit out homes to make them warm, well insulated and energy efficient over the next decade.

There would be a new Clean Air Act and everything a Labour government does will have to meet a ‘net-zero’ test to ensure that prosperity ‘does not come at the cost of the climate’.

While Sir Keir distanced himself from the Corbyn era – promising ‘we will never under my leadership go into an election with a manifesto that is not a serious plan for government’ – he praised the record of the New Labour years.

Highlighting improvements in healthcare, social mobility and poverty reduction, he said: ‘You want levelling up? That’s levelling up.’