Home » Europe » Ken Clarke reacts to ‘frantic’ MPs ‘SHOVING’ out May – ‘Thatcher wouldn’t put up with it!’

Kenneth Clarke spoke out in defence of Theresa May on Wednesday evening, as pressure mounted on her to resign as Prime Minister. The Father of the House claimed MPs on the right-wing of the Tory Party were trying to “shove” Mrs May “out the door” in a “frantic” manner over the last 24 hours. Asked whether the situation presents any similarities between Margaret Thatcher and Mrs May, Mr Clarke told Sky News: “The similarities here are not very great because Theresa inherited a dreadful situation, not of her creation. She has been trying to resolve it and get something through Parliament that in her opinion delivers Brexit.

“She has been obstructed all the way through by some sections of her own party and avoided opposition which therefore will not unite behind her at all.

“And it’s rather sad, I don’t know why her right-wing opponents in my party particularly are getting frantic in the last 24 hours, trying to shove her out the door in a rather brutal fashion.

Rumours were swirling about Mrs May’s resignation, with some speculating the Prime Minister would step down on Wednesday evening. 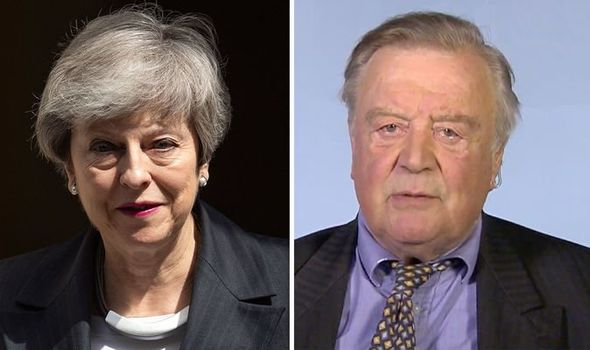 Theresa inherited a dreadful situation, not of her creation

However, Sir Graham Brady, Chairman of the Conservative 1922 Committee of backbench MPs, is now expected to meet Mrs May on Friday, according to reports.

The Conservative Party’s 1922 Committee consists of backbench MPs within the Tory Party. The Committee has an 18-member executive committee, and plays an important role in choosing the party leader.

Andrea Leadsom resigned from the Government in protest of Mrs May’s handling of Brexit, claiming the Prime Minister’s approach may not “deliver on the referendum result”.

Mrs Leadsom published her resignation letter on Twitter, where she said her decision to quit as Leader of the House comes with “great regret”.

Her letter said: “It is with great regret and a heavy heart that I have decided to resign from the Government.”

The Conservative MP for South Northamptonshire said she is “proud” of her work done in the past three years as a member of the Government.

But in her letter to the Prime Minister, the former Leader of the House set out in four points why she “no longer believes” in the Brexit strategy relentlessly being carried out by Mrs May.

Mrs Leadsom hit out at the “compromises” agreed upon by Mrs May during the Brexit talks with the European Union and, in the past few months, with Parliament, saying: “I stayed in Cabinet to shape and fight for Brexit.

“There have been some uncomfortable compromises along the way, but you have had my determined support and loyalty in your efforts to deliver Brexit as our shared goal.”

Farage BLASTS Boles – MPs should BACK BREXIT or ‘face a massive backlash from voters.’