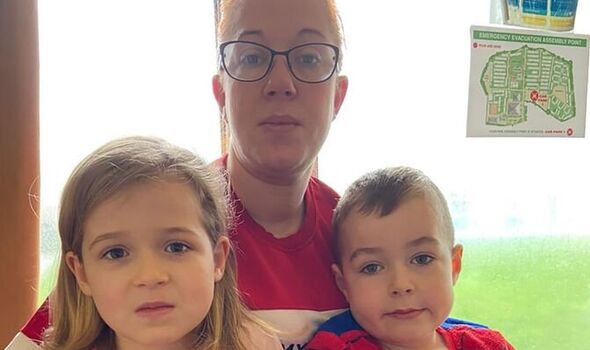 Nicola Fawkes, 37, took her four kids, her parents, sister and niece to the resort in Brean Sands, Somerset, but the family were shocked to find rubbish and dirt “everywhere” in their chalet. The family were given new accommodation but this was just as filthy, Nicola says, and it left her youngest children, Lilly, six, and five-year-old Jack, in tears.

Photos show mattresses with no bedding in one chalet, dust and rubbish strewn on a floor and dirty furniture.

After complaining several times to management, the second chalet was cleaned thoroughly but Nicola said she wouldn’t have stayed had it not been for her children.

The mother said: “If it wasn’t for my children being upset because they thought they weren’t going get a holiday, there’s no way I would have stayed in that property.

“It’s not fit for a dog. The holiday feeling had gone.”

The family had planned to stay at the nearby Sandy Glade holiday park but when they arrived late on Friday they found it was closed because of Storm Eunice. The family spent £270 on a seven-day holiday at Pontins as a replacement, Wales Online says.

Nicola, from Rhondda, south Wales, said: “Pontins has its reputation.

“We had our cleaning essentials ready, expecting a bit of dust. With Covid, I naively thought they’d have stepped up their game but nothing could prepare us for what we walked into.”

“When we got to the queue there were already people complaining about issues with chalets not being clean. I thought, ‘Here we go, it’s starting.’

“On opening the door, there was a damp smell and it was a case of: ‘Where do you look first, what do you take a photo of first?’ My daughters were going, ‘Oh my god mam, look at this, it’s disgusting.’

“The fridge was in the middle of the kitchen unplugged. Where the fridge was supposed to be, there was dirt. There were burn marks on the splashback for the cooker. The wardrobe was in the middle of one bedroom. There was a big long screw on one of the beds. In the bathroom there was faeces down the toilet. There were dead spiders on the ceilings.

“There was rubbish absolutely everywhere, an ibuprofen packet, dust, a dirty knife on the kitchen floor. There was mould on the bottom of the curtains and the ceiling. It was just horrendous. It makes you feel physically sick that they expect people to stay there on holiday.”

Nicola went back to reception. She said there was a queue of 15 to 20 other people who also had complaints, from “dead spiders in the bath” to broken wardrobes.

“I told the manager I wouldn’t expect a dog to sleep in that place,” she added.

“They said there’d been a backlog because of the storm. I said the storm was outside rather than inside our chalet. Although it looked like it had been inside.”

Nicola said the manager told her the accommodation had been “missed on the cleaning list”. She was offered a different chalet — but it did not impress the family much more.

“So we walked into the next one and I would say, out of 10, it was 0.5 better. The first one had not really been on the scale, it was way down in the minuses. This one had patio door windows you couldn’t see through because of the grime.

“Again the furniture was all in the middle of rooms. The fridge was again unplugged in the middle of the kitchen. There was urine down the toilet. There was a dead spider in the corner of the bathroom, cobwebs everywhere, black dirt all up the curtains. There were white splashes on the front of the fridge, I don’t know if it was milk. On one bed there was a see-through bag with pillows in.

“I was in shock. By this point my two younger ones were crying. We’d been travelling for hours. We went back up to reception and it was even more packed than the first time with people complaining.

“I got to the front of the queue and said, ‘You’ve got to be having a giraffe. This is my second property and it’s disgusting.’ Again, they said it’s been missed from the cleaning list. I said, ‘All the people here, have their properties been missed too?’

“The manager said yes. He said, ‘If you’re not happy you can leave.’ He was quite abrupt at this point. I said, ‘OK I want my refund now.’ I was told I would have to wait until Monday for the woman who deals with refunds to be in the office.”

Nicola said the manager told her cleaners would go to the chalet “urgently” so she returned. But three hours passed and no one came, she claimed.

“So I drove back to reception,” she added. “It’s about 7.30pm now. Once he got past the other people with complaints, the manager came to us. He was hostile, he recognised me straight away. I said it had been three hours and he said, ‘They’re on their way.’

“I said, ‘Every one of us is going to get out of the car and stand in reception, including my children, and we’re going to do a standoff.’

“He radioed through and then he told me the cleaners had been to the property. We went back to check and as we got there, two lads in their mid-20s were leaving. There was still a dead spider but it looked good on the surface. They were very apologetic, I can’t fault those two boys.

“Then our electricity went off. My dad went to reception and it was 45 minutes before it came back on. We were there in the pitch black using torches on our phones.

“There was no bedding. We had to wait about an hour for duvets to arrive. It’s about 8.30pm at this point and my younger children usually go to bed at 7.30pm. The two lads who’d cleaned the property arrived with the duvets, and then they came back another 30 to 40 minutes later with the pillows.”

When Nicola woke the next morning she felt like she had been “dragged through a hedge backwards”. She described the bed as “like cardboard”.