Home » Europe » Kill the Bill meaning: What is the Police, Crime, Sentencing and Court Bill?

Kill the Bill protests have entered their second week, with more planned in Bristol this weekend. The protests have seen violent clashes with police and scores of arrests. Most recently, ten people were arrested in Bristol on Friday for offences including violent disorder, assaulting an emergency worker and possession of class A drugs. Superintendent Mark Runacres said: “The majority of people acted peacefully however there was a minority who once again showed hostility to officers. Items, including glass bottles and bricks were thrown at officers, fireworks were launched at our mounted section while one of our horses was also covered with paint. This violent conduct is not acceptable. Officers repeatedly encouraged people to disperse but once the atmosphere changed and people became physical it was necessary to take action.”

What is the Police, Crime, Sentencing and Court Bill?

Kil the Bill refers to the 307-page Police, Crime, Sentencing and Courts Bill, which will hand police and the home secretary greater powers to crack down on protests.

The Government claims the bill will allow the police to take a “more proactive approach” to intervening in “highly disruptive” protests deemed to be a public disturbance.

The bill will hand the home secretary, Priti Patel, powers to create laws that would define “serious disruption”, which would then allow police to intervene in protests which are deemed disruptive by Ms Patel. 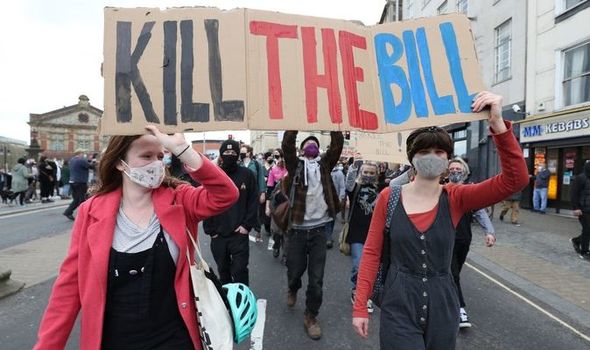 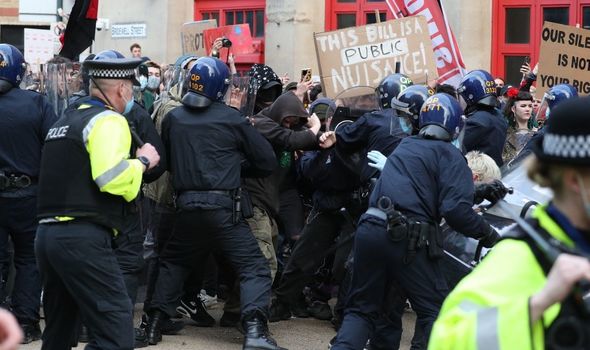 The proposed legislation also gives police more power to deal with “static protests” such as “sit-ins”, referencing the Extinction Rebellion protests which, the bill states, cost £16million to police.

There are also proposals to impose start and finish times on protests, as well as “maximum noise limits”.

The bill states police will be able to intervene in a protest where noise is impacting those around it.

The bill will also make it easier to convict protestors as it reinstates the offence of creating public nuisance into common law. 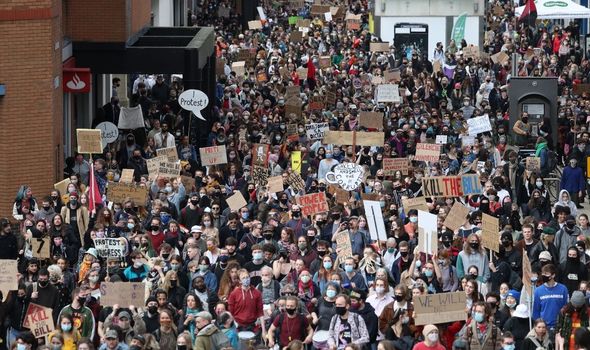 Protesting around the UK Parliament will also be outlawed by ensuring vehicle access is maintained.

The rules set out in the bill can be applied to a demonstration of just one person.

The Home Office insists it will respect the human right to protest as set out in the Human Rights Act.

However, opponents of the bill believe it will limit this right and hand greater powers to the police in a time when forces around the nation are less trusted than ever.

DON’T MISS:
UK vindicated: Major US trial shows NO health concerns for AstraZeneca [BREAKING]
EU vaccine war escalates as bloc rejects Covid jabs to UK from Holland [INSIGHT]
Lockdown rules changing THIS WEEK – What can you do from March 29? [EXPLAINER] 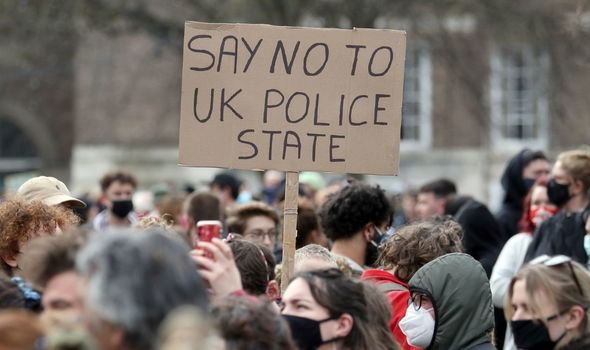 The scenes in Bristol are just one in a string of recent protests against the bill.

Many attendees in Bristol wore face masks and carried placards with slogans such as: “Say no to UK police state”, “Freedom to protest is fundamental to democracy”, and “Kill the Bill”.

Priti Patel described the events as “unacceptable”, adding: “Thuggery and disorder by a minority will never be tolerated.

“Our police officers put themselves in harm’s way to protect us all.” 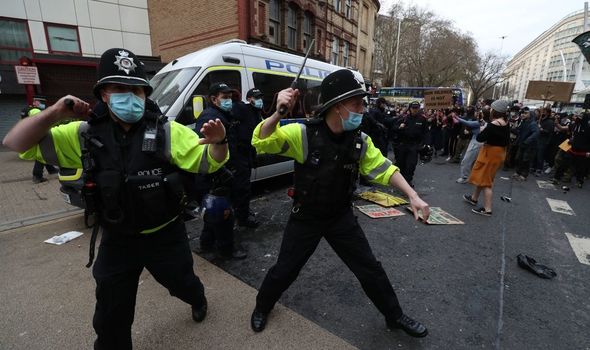 Bristol mayor Marvin Rees said he recognised “the frustrations” with the Police, Crime, Sentencing and Courts Bill but said that “smashing buildings in our city centre, vandalising vehicles, attacking our police will do nothing to lessen the likelihood of the bill going through”.

Thangam Debbonaire, shadow housing secretary and MP for Bristol West, added: “The scenes of violence and direct attack on the police in Bristol city centre will distress most people, including anyone who believes in defending the right to peaceful democratic protest.”

Darren Jones, Labour MP for Bristol North West, tweeted that the scenes in the city were “completely unacceptable”.

“You don’t campaign for the right to peaceful protest by setting police vans on fire or graffitiing buildings,” he said.