Samantha Gibson, 36, was given a police caution for a public order offence during Saturday’s Kill the Bill protest. She admitted she used the “F-word” at officers, reports Manchester Evening News.

It was completely out of the blue, neither of us had done anything wrong and I’m in shock. I don’t want to be around the police ever again so that rules out protests

But Ms Gibson alleges she was “jumped on by a number of officers” and pushed into the side of a police van during the arrest.

As a result, she claims she’s been left mentally and physically scarred.

The protester claims: “As a sufferer of PTSD and panic disorder, I feel extremely traumatised.

“Suddenly, I was jumped on by a number of officers and told I was under arrest.

“At this point, I went into a PTSD flashback, and then my head was smashed into the van wing-mirror with such force that it was folded back against the van, and I saw bits of black plastic coming off it. I later heard that was glass on the floor below me.

“I briefly blacked out at this point, my legs gave way, and I wet myself. I had been pushed and pulled between officers who were mostly male and a lot larger than me. I was shouting to police to stop as I have PTSD.

“It was completely out of the blue, neither of us had done anything wrong and I’m in shock. I don’t want to be around the police ever again so that rules out protests.” 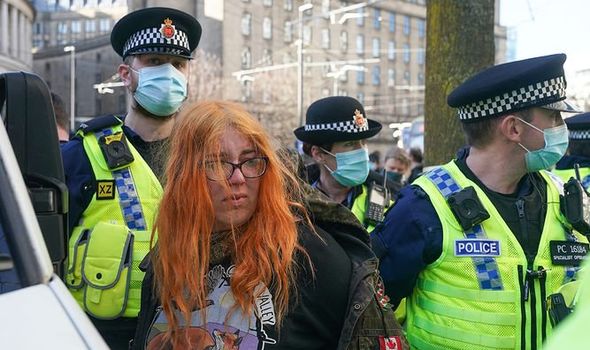 Ms Gibson was taken to a police station in central Manchester and given a £90 fixed penalty notice, which she claims she will be appealing.

She was detained following the arrest of her partner, who was arrested after police mistakenly identified him as a suspect wanted for other matters.

It was then when Ms Gibson swore at officers.

The woman alleges: “I started asking a police officer some questions. Due to my shock I was swearing, but standing still. I was asking what was going on, why could they not take his cuffs off, and occasionally using the f-word mid-sentence.

“I remember being on the floor shouting for help as officers violently cuffed me, pulled me back up and held me against the van. I was bent over almost double for a while, with their hands pressing my head down.

“I went into a severe panic attack and could not stop crying and shaking.” 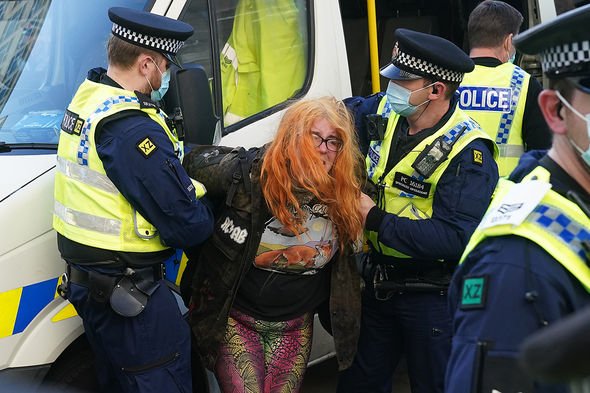 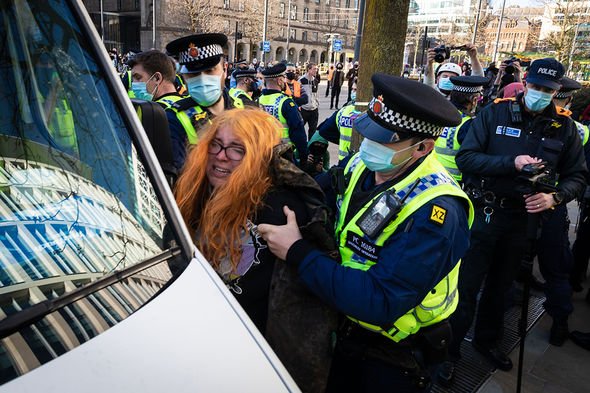 Ms Gibson, who is from Wrexham, north Wales, but has a support bubble with her partner, of Wigan, continued: “I’ve been an environmental activist for a number of years and I’ve seen a lot of police violence but nothing like the other day.

“It was completely out of the blue, neither of us had done anything wrong and I’m in shock. I don’t want to be around the police ever again so that rules out protests.

“It was like the TAU (Tactical Aid Unit) incited a riot. The whole time we were sitting on the bench and the evidence gatherers were pointing their camera at [my partner], who was doing nothing, while people were blocking the tram lines in front of us.

“My partner’s a pretty calm guy so he’s been processing things but he’s quite eager to take it forward as well.”

Ms Gibson claims she is ‘pretty sore’ following the attack and reported injuries to her hands, wrists, arms and knees, as well as pain in her shoulders and neck.

She added: “I remember a feeling of vulnerability, an inability to defend myself from assault.

“The hopelessness of having size, gender, and numbers used against me. The smell of aftershave, the sound of shouting, and the sight of large men in hi-viz is making me feel incredibly anxious.

“I have been going through therapy for the last few months, and this has brought me back to square one.” 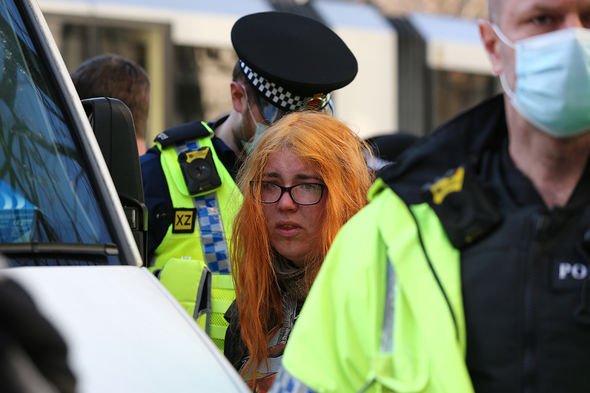 A Greater Manchester Police spokesman said that Ms Gibson received a caution. They added that her partner was arrested after he “refused to engage” with officers.

The spokesman said: “Officers were met with a high degree of hostility from a minority of people and our preference would always be that protesters dispersed peacefully.

“The woman received a police caution for a public order offence.

“The man arrested was suspected of being responsible for criminal offences not linked to the protests.

“He was arrested when officers had to take action because he had refused to engage with the police to confirm who he was. He was de-arrested as soon as we had enough further information about his identity to de-arrest him.”