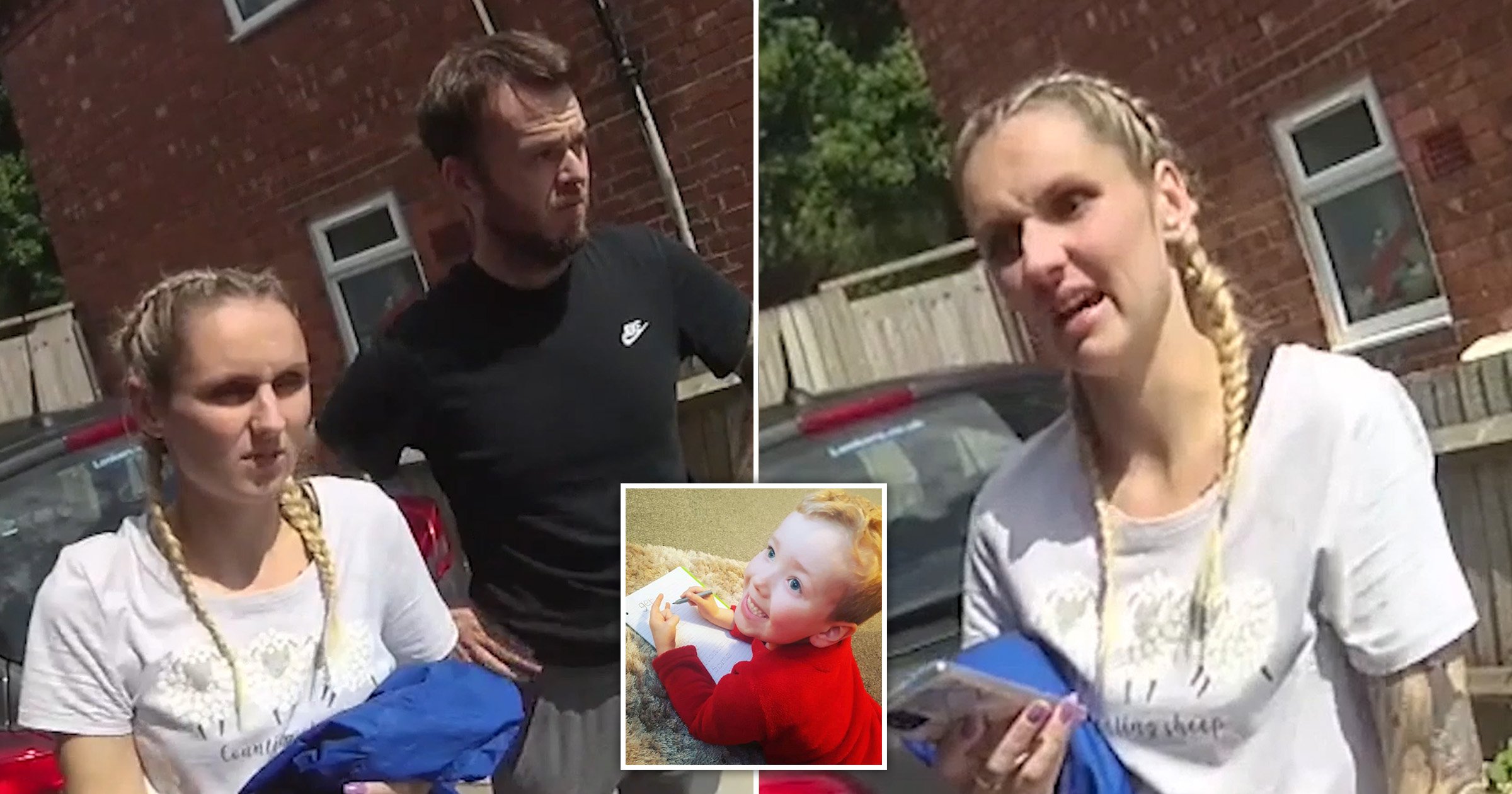 Emma Tustin, 32, killed the six-year-old by repeatedly slamming his head on a hard surface after she and partner Thomas Hughes, 29, starved the little boy and poisoned him with salt.

Tustin was convicted of murdering Arthur on June 17 last year, while his father Thomas was found guilty of manslaughter – but cleared of murder – for encouraging the killing.

Coventry Crown Court heard Arthur was subjected to a ‘campaign of cruelty’ which ‘amounted to torture’.

Newly released police bodycam footage of Tustin’s arrest shows the stepmother shedding crocodile tears as she claimed the six-year-old boy had actually beaten her and inflicted the injuries on himself.

Tustin claims that Arthur threw himself on the floor and hit her after he was told to sit on the ‘thinking step’.

She claimed the youngster hurt himself by banging his head on a radiator and ‘head-butting the floor on all fours’.

She told police: ‘Arthur was told to sit on the thinking step and Arthur threw himself all over the floor.

‘He’s banged himself on the radiator, he’s hit me, he’s kicked me in the process of me trying to get him back on the thinking step.

‘He’s then gone on all fours on the floor and I’ve told him to get up and I’ve shut the door. All I heard was a crack, he was head-butting the floor on all fours.

‘I said “Arthur you’re going to hurt yourself, I’ve phoned your dad” and he said “I don’t care”.

‘At that point he was fine, and then he dropped his head again as I’ve tried to bear hug him and pick him up, and he head-butted the floor three times.’

Taking the police officer outside the home, she pointed to the area in the doorway where she claimed Arthur hit his head.

She added: ‘It’s concrete, there’s no underlay under that. But he banged his head three or four times, he’d knocked himself unconscious. I picked him up, put him on the sofa poured water in his mouth.’

When the officer asked what she did next, Tustin says: ‘I came out, told him to get up, he told me no. So I tried to bear hug him and put my arms underneath him and pick him up and he dropped and he banged his head another three times on the floor.’

Seeming to become emotional, Tustin said Arthur ‘hit’ and ‘kicked’ her as she tried to lift him up off the floor

She went on to claim that the six-year-old had ‘battered’ her children and his father and ‘smashed the house to pieces’.

‘Yesterday we went to my friend’s house, he’s pushed me down five stairs. ‘You’re not my real mum I hate you, I’m going to get my mum to kill you’, he said.’

While sobbing, Tustin added: ‘And even so I’ve done my best for that kid.’

During the whole conversation, Arthur’s father Hughes remained completely silent, standing in the background and watching the exchange.

The horrific details of what really happened to Arthur emerged during a nine-week trial at Conventry Crown Court.

Distressing footage of the ‘starving’ boy had shown him crying ‘nobody loves me’ and struggling to carry a duvet hours before his death.

He is said to have been deprived of food and made to stand in a hallway for 14 hours a day.

Tustin carried out the fatal assault while in the sole care of Arthur at her home in Cranmore Road, Solihull, violently shaking him and repeatedly banging his head, likely against the hallway wall.

She then callously took a photograph of the unconscious youngster on her mobile phone, while he lay dying in her hall, then sending the image to Hughes, who sent a text message to Tustin 18 hours before the fatal assault telling her ‘just end him’.

Tustin then took 12 minutes to call 999, instead first ringing Hughes, before lying to medics and later police that Arthur ‘fell and banged his head’.

She claimed at trial he must have thrown himself down the stairs, despite evidence he was so starved he could barely stand.

Speaking after the pair were found guilty, Arthur’s maternal grandmother, Madeleine Halcrow, described Hughes and Tustin as ‘wicked’ and ‘evil’.

The pair will be sentenced by a judge later toady.

It comes as an independent review gets under way into the actions of social workers who found ‘no safeguarding concerns’ for the boy after visiting just two months before he was murdered.

Watch LIVE! Royal reporter Cameron Walker joins us after the Queen turns up to two events