The King is welcoming around 500 guests to a reception at Buckingham Palace this evening. Charles, joined by Queen Consort Camilla, is hosting world leaders, foreign royals and dignitaries who have travelled to Britain for the state funeral tomorrow. Other members of the Royal Family are also attending the grand event on Sunday.

Guests, dressed in black, began arriving in coaches from 5pm before making their way in the Grand Entrance.

US President Joe Biden and First Lady Jill Biden arrived in the presidential car among a convoy of other vehicles shortly before 6pm. The Bidens attended the Queen’s lying in state at Westminster Hall earlier on Sunday.

Prime Minister Liz Truss, who had an audience with Charles earlier today, arrived at the reception at 5.45pm.

President of Ireland Michael D Higgins travelled on a coach with the former King and Queen Consort of Spain, Juan Carlos and Sofia.

King Abdullah II and Queen Rania of Jordan arrived just before 5.30pm in their own vehicle at the Grand Entrance of Buckingham Palace. They were followed by their son, Hussein, Crown Prince of Jordan. 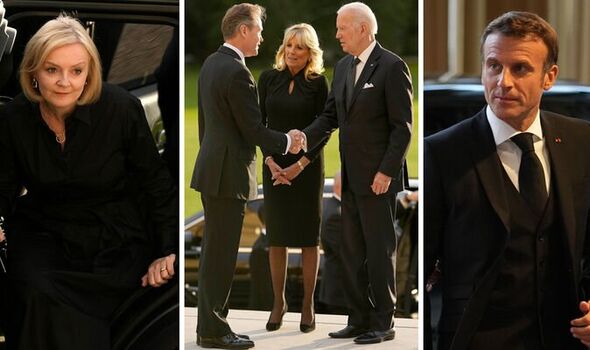 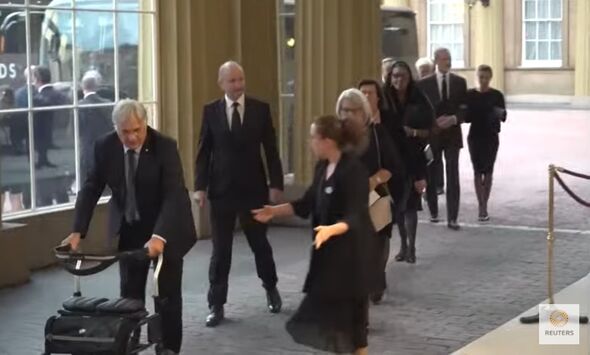 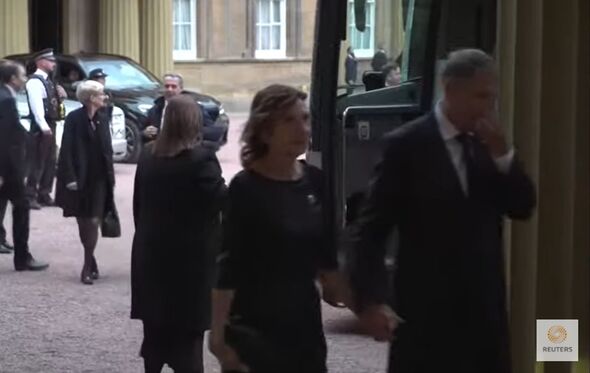 There was confusion over whether Prince Harry and Meghan Markle would make an appearance.

The Telegraph reported that the Duke and Duchess of Sussex appeared to have been “uninvited” to the reception.

Harry and Meghan, who are staying at Frogmore Cottage in Windsor during their UK visit, reportedly received an invitation earlier this week.

But palace officials insisted the event was for working royals only and that the US-based couple were not expected to attend. 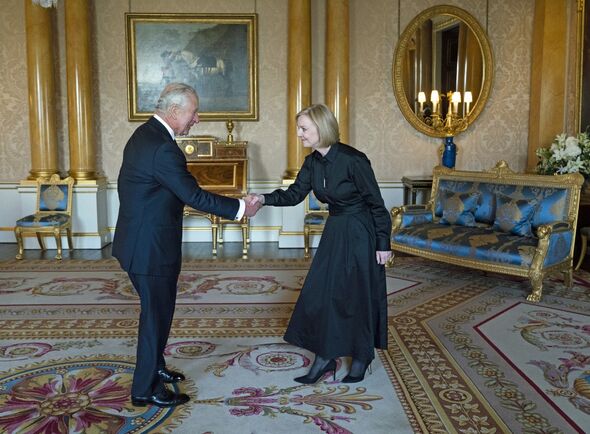 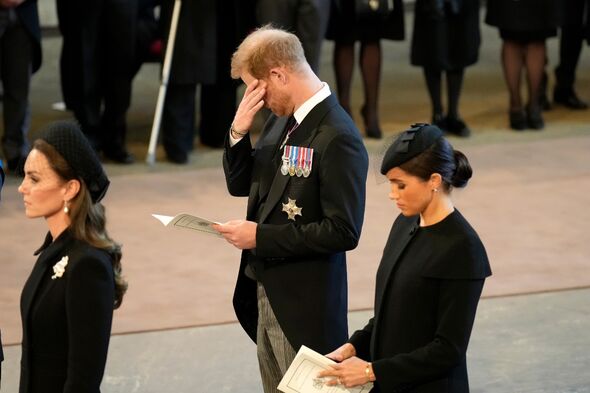 Sources close to the Sussexes are said to have been left baffled by the mixup.

Meanwhile, Page Six reported that Harry and Meghan only found out they had been “uninvited” after reading it in the press.

The American media outlet cited a source as saying: “I’m told they only found out they were uninvited by reading press reports.” 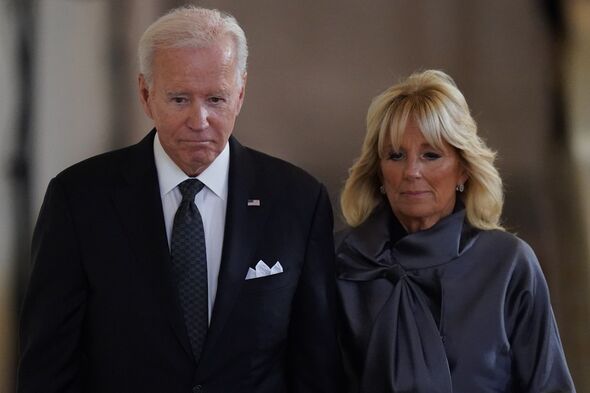 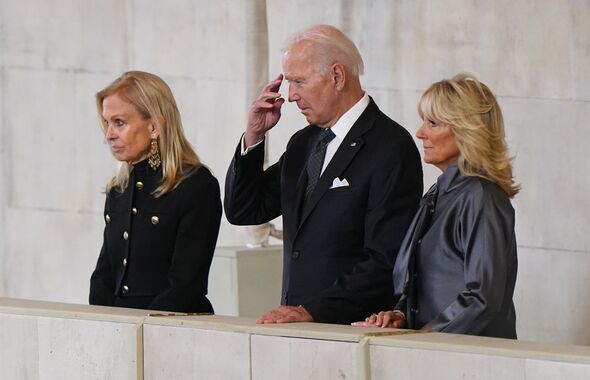 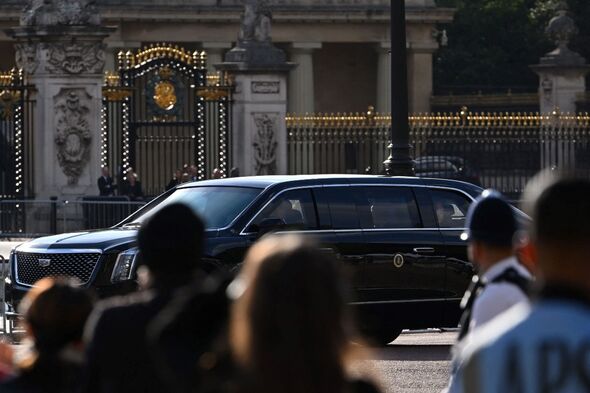 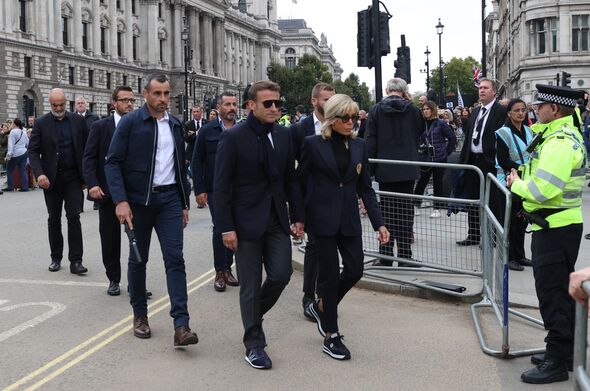 It comes ahead of the Queen’s state funeral at Westminster Abbey on Monday on what will be a day of pageantry, military processions and solemnity

It is a national bank holiday to allow as many people as possible to say a final farewell to the beloved royal matriarch.

Two thousand people including foreign royals, world leaders, presidents and prime ministers will be in the congregation at Westminster Abbey.

The lying in state at Westminster Hall is due to end at 6.30am tomorrow.

Members of the public have flocked to the capital from all over the country to queue for up to 24 hours to pay their respects to the nation’s longest-reigning monarch.

The coffin will be taken in a procession led by King Charles from the Palace of Westminster to Westminster Abbey for the state funeral at 11am on Monday.

The service will be televised, and a national two minutes’ silence will follow the Last Post being sounded at 11.55am.

Reveille, the national anthem and a lament, played by the Queen’s Piper, will bring the service to an end at approximately noon.

The coffin will then be taken in procession from Westminster Abbey to Wellington Arch and then travel to Windsor.

Once there, the hearse will travel in procession to St George’s Chapel at Windsor Castle via the Long Walk, after which a televised committal service will take place.

Later in the evening, there will be a private interment service with members of the Royal Family.

The Queen’s final resting place will be the King George VI memorial chapel, an annex to the main chapel – where her mother and father were buried, along with the ashes of her sister, Princess Margaret.

Prince Philip’s coffin will move from the Royal Vault to the memorial chapel to join his wife’s.