He said that “my mother gave an example of lifelong love and of selfless service” and was “irreplaceable”. As he took up his new responsibilities he vowed he would be “upheld by the affection and loyalty of the peoples whose sovereign I have been called upon to be”. And, in a historic first, TV audiences around the world were given a glimpse of the moment the reign of Charles III formally began at St James’s Palace.

In his declaration, bringing to an end the second Elizabethan era, King Charles paid tribute to the late Queen.

He also announced the Queen’s death, and said the entire nation and whole world “sympathises with me in the irreparable loss we have all suffered”.

The King said the outpouring of sympathy had given him “the greatest consolation”.

He added: “To all of us as a family, as to this kingdom and the wider family of nations of which it is a part, my mother gave an example of lifelong love and of selfless service.

“My mother’s reign was unequalled in its duration, its dedication and its devotion.

“Even as we grieve, we give thanks for this most faithful life.

“I am deeply aware of this great inheritance and of the duties and heavy responsibilities of sovereignty which have now passed to me.

“In taking up these responsibilities, I shall strive to follow the inspiring example I have been set in upholding constitutional government and to seek the peace, harmony and prosperity of the peoples of these islands and of the Commonwealth realms and territories throughout the world.” 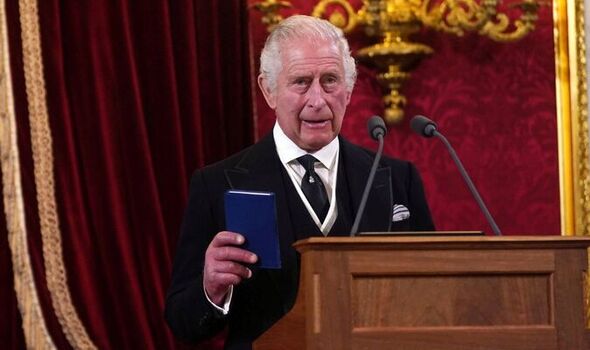 He added in performing his new task he was “profoundly encouraged by the constant support of my beloved wife”.

The pageant and ceremony to mark the symbolic transition to a new reign has until now taken place behind closed doors. Aspects date back more than 1,000 years.

But allowing in cameras was one of the first changes instigated by the new King.

Audiences also witnessed the moment Camilla the Queen Consort and William, the new Prince of Wales, as well as current and former prime ministers, bishops and dignitaries all pledged their allegiance as their new monarch appeared before them. All proclaimed: “God Save the King.”

The King also signed an oath to uphold the security of the Scottish Church, with Prince William and Camilla bearing witness.

The new monarch was pictured smiling through tears as he waved at the crowd of well-wishers who cheered and shouted “God Save the King” as the sovereign’s vehicle drove through the gates of Buckingham Palace after his proclamation and a day of pomp and ceremony. 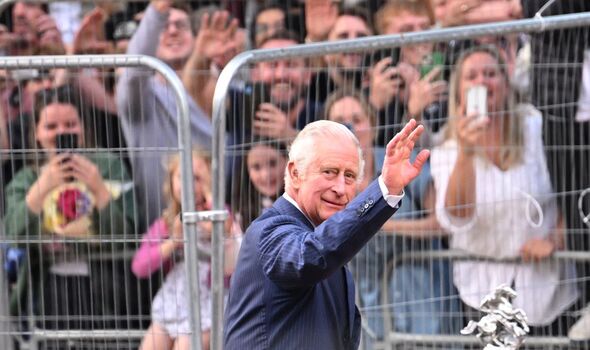 Outside, thousands continued to leave floral tributes in memory of his beloved “mama” Queen Elizabeth II.

Camilla smiled and waved to well-wishers as she arrived in a separate car.

And, in a sign that he intended to stick to his oath and continue the Queen’s work, he later held an audience with the Prime Minister, members of the Cabinet and opposition leaders at the Palace.

Yesterday’s historic day was part of a long-established and highly choreographed plan for the national mourning period, which will include a bank holiday on the day of the state funeral.

Charles automatically became the new sovereign on the death of his mother aged 96 at Balmoral Castle on Thursday afternoon.

The Accession Council, a body of advisers that dates back to the time of the Norman kings, usually convenes within 24 hours to formally proclaim an ascension.

However, because the news of Queen Elizabeth II’s death emerged late on Thursday, the ceremony was postponed until yesterday.

It took part in two stages, with the Accession Council convening to sign the proclamation at 10am. 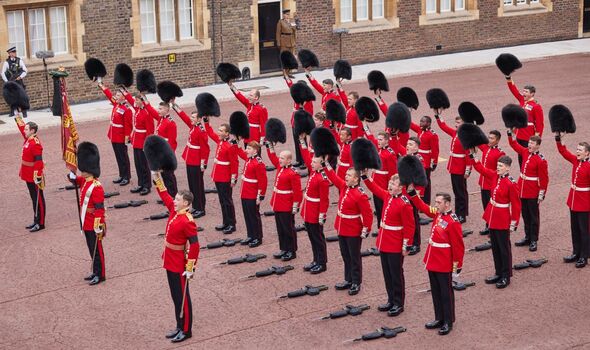 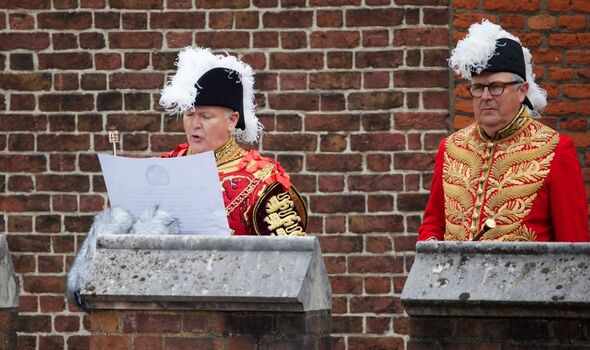 Following convention, Charles did not attend the first part of the ceremony, when the death of the Queen was formally announced and he was proclaimed as the new King.

But, breaking with tradition, for the first time women were permitted to attend.

And Commons Leader Penny Mordaunt, as Lord President of the Privy Council, also became the first woman to proclaim a new monarch.

The 250-strong council began proceedings in the State Apartments of St James’s Palace, with the event attended by Camilla, Prince William, Privy Counsellors and other dignitaries.

The proclamation of Charles becoming King was then read out before members of the council, including Camilla, William and MPs from both sides of the House, signed it.

Ms Mordaunt, who only became leader of the council last week, then read a series of orders for the publication and organisation of the transfer of power to the King.

The proceedings then moved to the Throne Room, where everyone greeted the new King by saying “God save the King” as he entered the room and made his personal declaration.

Members of the public were then allowed to witness the proclamation of King Charles III as it was publicly announced on the Palace balcony overlooking Friary Court at 1pm.

Flanked by state trumpeters, the Garter King of Arms read the first and principal proclamation before saying “God Save The King”, which the eager crowd repeated.

The state trumpeters sounded the Royal Salute and the national anthem was then played by the King’s Guard, previously the Queen’s, with the crowd joining in and singing along.

As the principal proclamation of the new reign was completed, gun salutes rang out across the country and abroad.

Sixty-two rounds were fired near Tower Bridge beside the River Thames by the Honourable Artillery Company, and 41 rounds beside Park Lane by the King’s Troop Royal Horse Artillery. Spectators lined up across Tower Bridge and along the river.

Salutes were also fired from Cardiff Castle, Edinburgh Castle, Gibraltar, Colchester, York, Larkhill near Stonehenge, naval bases in Devonport and Portsmouth and a number of stations at sea. 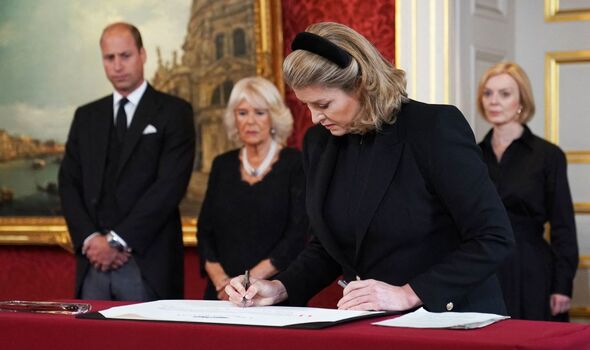 Yesterday, a second proclamation was read on the steps of the Royal Exchange in the City of London in front of a crowd of thousands at noon.

In a ceremony similar to the one witnessed at St James’s Palace, state trumpeters led a procession which included the Lord Mayor and various City officers.

Trumpeters sounded a fanfare, marking the start of the proceedings. The Common Cryer called for silence from the crowd before the Clarenceux King of Arms, a London officer of arms, read the proclamation and proclaimed: “God save the King!” It was met with applause and cheers.

The Band of the Coldstream Guards later followed with the national anthem, with the crowd of course singing “King” in place of “Queen”.

The Lord Mayor then called for “three cheers for His Majesty The King!”

Leaving Buckingham Palace, the King and Queen got out of their Rolls-Royce for an impromptu walkabout, greeting well-wishers lining The Mall as they made their way to Clarence House.

Cheers and applause rang out along with “God save the King” as the smiling couple shook hands with and accepted bouquets of flowers from people who had waited for hours.

Speaking after the event, Lady May said: “It’s a very solemn, very historic occasion, and a very sad occasion. But we’re here to celebrate a new King. One of the great benefits of our constitution is continuity, which gives great reassurance.”

David Cameron added: “A great privilege of this job was the weekly audience with the Queen.” He said he “drew a lot of strength” from the monarch’s loyal service.

Boris Johnson said: “It’s a very sad time but it is also one of renewal and hope. It’s an absolute privilege to be here. Everybody is conscious that nothing like this has happened for seven decades. They are witnessing history, full of hope and confidence.”

Spectator Chrissie Ellis, 61, from north London, said: “I feel very privileged to have seen it.” She added: “You’re so used to singing about the Queen. That’s what I’ve been brought up with and known all my life. It felt strange, but also momentous and historic.”

Man arrested for arson after mum and kids, 3 and 5, saved from burning home