King Charles delivered his first speech to the nation ahead of the first memorial service in honour of the Queen at St Paul’s Cathedral. In an emotional display of his affection for his “darling Mama”, the King wished “may ‘flights of Angels sing thee to thy rest” as he thanked the late Queen for her commitment to the UK over the past 70 years. Broadcaster Dawn Neeson noted the quote, an extract from Hamlet, had previously been linked to Diana, Princess of Wales as she pondered about a potential “nod” to his late ex-wife.

Speaking to Sky News, Ms Neesom said: “Evidently that phrase is from Hamlet, talking of Diana.

“The phrase from Hamlet was also sung or read at Diana’s funeral. So I do wonder if him choosing that particular phrase was maybe a subtle mention and a nod to his late wife.

In addition to honouring his mother’s memory, Charles III also confirmed Prince William and Kate, the Duchess of Cambridge and Cornwall would be anointed as the new Prince and Princess of Wales. 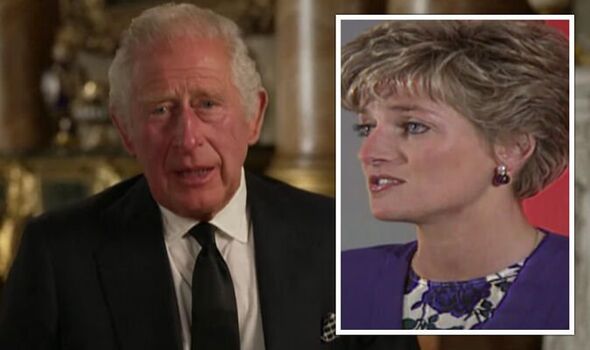 The royal couple expressed their gratitude for being entrusted with the role, with Kate remarking she “appreciated the history” the title comes with.

Kate is the first to openly use the Princess of Wales title since the death of Diana in 1997.

A royal insider said: “The couple are focussed on deepening the trust and respect of the people of Wales over time

“The new Princess of Wales appreciates the history associated with this role but will understandably want to look to the future as she creates her own path.”