King Charles was pictured wearing a kilt as he was greeted by SNP leader Nicola Sturgeon. The King was joined by Camilla, the Queen Consort, as the couple arrived at Holyrood. Scotland’s former first ministers, including Alex Salmond and Labour’s Jack McConnell, gathered in the public gallery at Holyrood for King Charles III’s first appearance at the Scottish parliament as monarch.

The King will take part in a motion of condolence to commemorate his mother’s death last Thursday, led by Alison Johnstone, the parliament’s presiding officer.

He will then address Holyrood for the first time as king.

The First Minister has already paid tribute to the Queen as the “anchor of our nation” ahead of a Motion of Condolence in the Scottish Parliament.

She said that in an “ever-changing world, especially in turbulent times” the Queen had been a “great constant”. She also spoke about the Queen’s “genuine love of Scotland” and her “profound sense of public service”, which Nicola Sturgeon said “never faltered”. 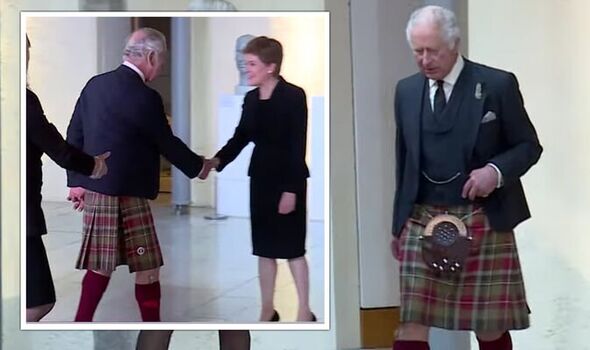 Presiding officer, Alison Johnstone, opened the session and paid tribute to the Queen, who was there for the assembly’s first session in 1999.

Two minutes’ silence is now being held. Sturgeon will shortly move a motion of condolence.

A statement from the Scottish Parliament read: “This Parliament expresses its deepest regret and grief at the death of Her Majesty The Queen; conveys its sincere condolences to His Majesty The King and other members of the Royal Family in their bereavement; affirms the great affection and esteem in which Her Majesty was held, and expresses gratitude for her life of exceptional public service and her long and close association with Scotland and the Scottish people.”

Before hearing from MSPs, the King will be introduced to opposition party leaders, Douglas Ross for the Tories, Anas Sarwar for Labour and Lorna Slater for the Greens.