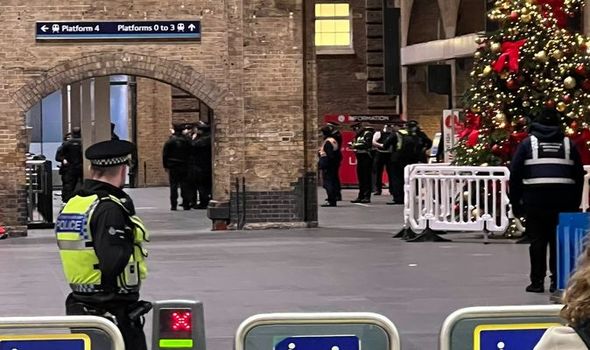 Police have been seen entering the station, with seven platforms blocked off. Severe delays to rail services have been reported. One Twitter user reported seeing police dogs enter the station.

They added: “Police are dealing with an incident at Kings Cross.”

“The station is shut and we can’t run to/from Kings Cross until further notice.”

They then quickly posted: “Kings Cross station is open and we can to/from the station as normal again.

“Some residual delays are possible, so please check before you travel.”

Another passer-by on Twitter, @makejoshscrum wrote: “Police response is HUGE here at #KingsCross – main concourse is still open to the public!”

National Rail said: “The police are dealing with an incident at London Kings Cross.

“Consequentially, all lines are blocked and trains that call at this station may be delayed.

Another Twitter user, ‘LadGaga13’ tweeted that passengers at the station had been evacuated.

“The station is shut and we can’t run to/from Kings Cross until further notice.

“Please use services to/from St Pancras instead, these are still running.”